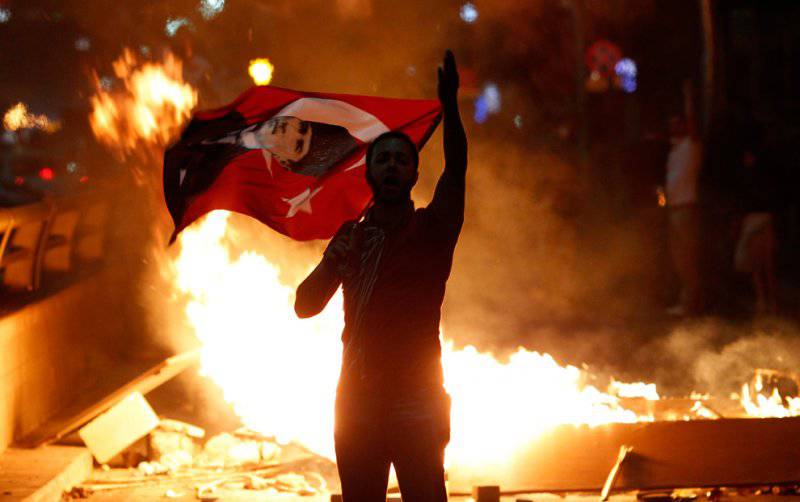 It seems that, wishing to become the most powerful country in the Middle East, Turkey stumbled: Recep Tayyip Erdogan was at the center of a loud corruption scandal, unable to influence the outcome of the war in Syria, and could not stop the decline in the lira. The rating of the Prime Minister is steadily falling, in the republic that protests have not stopped for a week. Despite all the problems, Erdogan wants to put forward his candidacy in the upcoming presidential elections - but who will support him?

"Big Bribe" and other adventures of Erdogan

As a result of the corruption scandal that began at the end of last year, the Turkish prime minister was completely isolated. It is opposed by students who still remember the May unrest, police and military, dissatisfied with the mass arrests of security officials, supporters of informal religious movements who want to come to power, and President Abdullah Gul himself, who is trying to distance himself from the failed policy of Erdogan. It is characteristic that it was thanks to the support of the latter that Gul became president. Prior to that, Gul, like Erdogan, was Prime Minister. It seems that Recep wants to repeat the path of his former patron, having won the presidential election this year.

It should also be noted that both Gul and Erdogan are considered moderate Islamists. Ataturk's followers consider them a threat to the republic. It is worth noting that most of the adherents of the old order are officers, so one should not be surprised at the massive anti-government sentiment among high-ranking military personnel. They are also supported by police officials who initiated the large-scale operation “Big Bribe”.

The edge of the operation was directed against the current cabinet. During a series of investigations, many ministers of Erdogan managed to convict of embezzlement and bribery. The three "at fault" ministers immediately resigned, while several bankers, closely associated with the government, were arrested.

It turned out that the offspring of many officials were selling drugs and weapons, part of which was intended for the Syrian militants. However, this is not surprising: everyone knows the position of Turkey and its willingness to help the fundamentalists. Most interesting of all, the employees of the state-owned Halkbank helped Iran purchase large quantities of gold, although the Islamic Republic is considered to be almost the main enemy of Turkey. Now the actions of ministers can be interpreted not just as ordinary corruption, but as a betrayal.

However, the position taken by Erdogan in relation to Syria and Iran is unpopular with voters. The media criticized the prime minister for his excessive militancy and readiness to get involved in the Syrian conflict on the side of Al-Qaida of other Islamist groups - more aggressive like-minded Party of Justice and Development. Turkey learned nothing from the Syrian war, and this failure in foreign policy is also attributed to Erdogan.

The Prime Minister was also incompetent in financial matters. Back in the spring of 2013, the Turkish lira began to decline gradually, and the national debt began to grow. The central bank was unable to remedy the situation by reducing interest rates. On top of this, the economic instability that began in May, which reached its apogee after the Big Bribe operation, affected the economy.

Erdogan had many enemies during his reign; these are both Islamic and secular opposition, as well as military, guarding the republic. Of the external enemies of Turkey, attention should be paid to Saudi Arabia, Israel and the United States - each of these states has claims against the Turkish government in general and Erdogan in particular.

For example, Turkey is a natural rival for the Saudis in the Middle East, and victory over it guarantees dominance in Syria and Egypt. Israel is unhappy with the activation of Turkish foreign policy in Syria, Lebanon, Egypt and even in Palestine, and still cannot forget the incident with "Flotilla freedom. " As for the United States, they are exactly the opposite, categorically not satisfied that Turkey did not get involved in the Syrian war and remains inactive. If this happened, the United States would have killed two birds with one stone: on the one hand, Bashar al-Assad would have to fight a very strong opponent, and on the other, the Erdogan government would quickly resign under the influence of anti-war sentiment, after which the last island of stability on The Middle East would be mired in an abyss of revolutionary unrest.

Erdogan just planned to do exactly as he was ordered by foreign sponsors, but he faced the strongest opposition in the country. The army in the battle was not much torn, and many secular officers doubted whether to intervene at all in the Syrian adventure. As a result, despite many reasons, the Turkish invasion of Syria remained the fantasy of Erdogan and the American politicians.

The destabilization of Turkey is important to Israel and the United States also for the revitalization of the Kurdish movement. Israel is known for its support for the Kurdish parties fighting the Islamic Republic of Iran. According to the Israeli secret services, the Kurds are a great deterrent against Iran. The hands of Kurdish separatists at the expense of Israel in recent years have been committed several high-profile terrorist attacks and contract killings. "Syrian Kurdistan" was created with the tacit consent of Israel; In any case, Tel Aviv was pleased with the “cut” of one of its former enemies, Syria.

However, Kurdish also wanted to use Erdogan: he leads a very active trade policy in Iraqi Kurdistan, exchanging essential oil items. Iraqi Kurdistan has made a lot of money selling energy, but so far autonomy has invested these funds only in its own economy. Experts predict that in the future Kurdistan may direct part of the funds to the development of the backward eastern regions of Turkey, mostly populated by Kurds.

Closer to Iraqi Kurdistan, Erdogan wants to get the votes of Turkish Kurds. However, for the time being, Israel and the USA are skillfully playing the Kurdish card, so Turkish Kurds are about to fall off the Prime Minister’s political hook. In this situation, Erdogan has no choice but to reconcile with the Kurds in an attempt to gain their support in the upcoming presidential elections.

The current Turkish Prime Minister has long been considered a moderate cleric, who, together with President Gul, is ready to abandon the path of development proposed by Kemal Ataturk. That is why the United States favored Turkey for a long time: thus, the States hoped to bribe the Islamists, tilting them to their side. But in 2011, the Middle East abscess burst, and all the pus came out. It turned out that it is possible to support not only moderate, but also radical Islamists, in whose eyes Erdogan and Gul are almost traitors to Islam.

It turns out that Turkey began a gradual drift towards moderate Islamism back in the “zero” years, when the power of the military weakened significantly. If Erdogan had another five years left, he could well have become the killer of a secular republic, but not destiny: now, when Islamism is planted in the Middle East at an accelerated pace, Erdogan does not suit anyone.

The current Prime Minister of Turkey can no longer remain in politics for both objective and subjective reasons. At the end of last year, the circumstances were such that many supporters turned away from Erdogan, and his external and internal enemies rallied. Erdogan made many mistakes himself, for example, trying to get Turkey involved in a Syrian conflict.

It is not known how the current acute political crisis in Turkey will end. But surely, one thing can be said: Ataturk’s Republic is undergoing great changes. The old model has outlived itself, and many of the Turks do not accept Islamism, which is actively imposed by the ruling party and part of the opposition. In the coming years, the country will be forced to look for a new path, and the range of options is very wide, ranging from military dictatorship based on the ideas of Pan-Turkism, and ending with the introduction of Sharia norms.