An open letter to the President of Ukraine V.F. Yanukovych 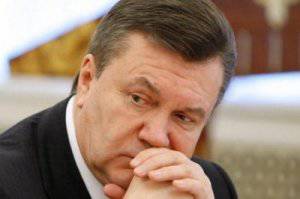 
We, members of the Kremenchug branch of the Union of Soviet Officers of Ukraine, are concerned about the development of events that began as completely fair and allowed by morality and law the use by a part of our citizens of their legitimate - guaranteed by the Constitution and VAMI - the rights to express our opinion and protest, but, as further showed events, it was only a cover for a completely different action - actions to overthrow the legitimate government in our independent state according to the same Constitution.

Our position. Ukraine is certainly not Soviet, but it cannot and, most importantly, should not be anti-Soviet! Otherwise, how to go forward - with your head turned back? The world is undergoing a change of culturalhistorical epochs: usury born in Judaism, fostered by Christianity and especially cultivated by Catholicism is becoming obsolete - a completely different economy is on the horizon! And even though the name of this era has not yet been found, one thing is clear: the future must be entered with dignity and honor, and not through the back door of history.

We appreciate YOUR restraint and desire to unleash a sharpening conflict based on consciousness, patriotism and civic position, both of ordinary members of the “Maidan” and the rest of the people of Ukraine. But the conflict — and this is obviously becoming clear to the majority — threatens to cross legal boundaries, because the manipulators are provoked by that “Maidan” and carried out by the leaders of the so-called opposition hidden behind the parliamentary immunity, who first interfered with the work of the Verkhovna Rada and now organized the unrest.

It is no longer a secret — and even a man in the street knows it — that global politics, GEOPOLITICS, are ruled by shadow and illegitimate structures that are not controlled by international law, the UN, or even world public opinion.

Their goal is not understood by many at the moment, just as, by the way, its means of achievement, which include artificially created protest actions under the formal cover of constitutional rights, quickly developing into artificial “color revolutions”, one of which, called the Orange people Ukraine and you personally experienced recently. But, apparently, she did not teach everyone and not everything.

And the goal of that policy, achieved by the means to which this present “Maidan” belongs, is to build our people into the world order, which presupposes a total change of our civilizational (cultural) guidelines and ideological principles.

In short, the world is going on, more precisely, a psychological and information war for souls and a change in the consciousness and spiritual structure of our people and the independent policy of the state of Ukraine to develop its national culture and history. By unifying our consciousness, changing our mentality, Europe, endowing the world and human history with colonialism, two world wars, fascism, and now neocolonialism in financial and economic war, this Europe is trying to turn us into working cattle, and use our territory in our geopolitical interests.

But! Noteworthy here is that the mondialist structures of candidates for world rulers, the cinarchos, independently organized by international law, not legitimized by international law, calls for legislatively to form "world political power", the beginning and core of which is the EU, calls on ... the Catholic Church - the Pope's encyclical Caritas In Veritate! The encyclical was published in July 2009, and already in December of the same year in the same Lisbon, where the Constitution of the EU was adopted in the form of a treaty in 2006, “European construction” culminated in the creation of a supranational structure - the structure model of the “new world order”, European Parliament. Representatives of this structure, which sets such goals and legitimizes them already at home, are now brazenly interfering in our internal affairs with the diplomats of the United States and hitting our territory, rousing and funding the Maidan, provoking, if not civil war, then overthrowing the legitimate power in Ukraine. These are the realities of the double standards of "European values"! That is why the Greek Catholic Church is present on the “Maidan”! The activity of that European structure was given by the financial and economic crisis that began in 2008, and the EU did not pass away, and therefore pushing the EU to aggressive territorial-political expansion in its financial and economic war, in the policy of eliminating national state sovereignty while leaving only external attributes - flag and anthem. The trilateral commission of mondialists calls this policy “overcoming the national state” or “genetically modified management” of the “new, voluntary, cooperative imperialism” they are creating, which its representatives stated as the pursued goal on the eve of the signing of the European Treaty.

For an objectively emerging multipolar world, a new cognitive, scientific, religious, political and civilizational, cultural situation is characteristic, associated with the awareness of humanity of its unity as a multiply connected multiple human integrity: the world is the peoples! Science has already defined the principle of managing a multipolar world - TOGETHER to overcome the crises of its growth. Unfortunately, the awareness of this objectively ongoing process, which also requires management of itself, is deliberately distorted by globalization (dictating free trade), built on the patterns of those synarchs, the global financial oligarchy led by a cartel of banks - the US Federal Reserve. This situation, coupled with the country's geopolitical position, confronts a national politically independent state with the problem of historical responsibility before its people - the task of choosing with whom, under what conditions and why - why it is necessary to unite and delegate part of its sovereignty to a regional structure - this is required by sustainable development declared by the UN politics of the third millennium, and the XXI century. - go to it. In nature, in the world of okremishnyh can be except idiots. The world, nature, are integral, and the essence of political independence is not about whom to surrender, as required by the “Maidan”, but with whom to unite into an alliance to live and develop the country, the people and the state!

You, in our opinion, clearly and affordably set forth this task in your recent Appeals - in the interests of the people of Ukraine.

What is happening now in Ukraine is a fragment of such a world war, and “Maidan” is its means: WAR AGAINST UKRAINE AND UKRAINIAN PEOPLE!

The participants of the “Maidan” are the same policemen and OUN-UPA as in the Patriotic War, no matter how then, and now: who, how and why was wrong, went against the course of history. Objectively, now they are striving to unleash a civil war in Ukraine so that NATO units will come to the place of those diplomats. Subjectively, they go against the course of history. Unfortunately, the history of the Ukrainian people has vivid precedents of such behavior of its elite — an example of this is the beginning and the middle of the 20th century, when either invaders were invited here, or they came with them. She must not repeat!

The Army, Navy, Internal Troops and the Police (for the time being, we have the police, not the police!) Are not carnival toys for the parade on the Independence Day holiday, THEY ARE THE STATE SCRAPES! And their representatives, from the private and the unit commander to the minister, are insulted and humiliated by the cries of foreign media and our 5 channel, and even in the performance of duty!

For the power structures of the state there are no “good – bad” or “soft – hard” coordinates, and there is only one thing - “legally or illegally”! Humiliating and insulting a state representative - they humiliate and insult this state itself. And this is happening now. This is not allowed! For this does not apply to the moral and political characteristics, it is - attacks on the state. This is a threat to its existence! Enough to explain to the "Maidan", it's time to explain to the Ukrainian people.

The only thing with whom it is still necessary to explain especially and immediately, so with students and rectors of universities. “Maidan”, of course, as the technology of artificial revolutions requires, hid behind students. But those students are good too! Who do our universities prepare? Is it that those citizens who will transfer the management of society and the state? Where is their patriotism, where is the civil position, if the young man is not able to comprehend the arithmetic of the economic situation of the country, and even enveloped in economic killers by indentured loans? After all, state policy is not based on the opinion of the crowd, and even artificially formed! To manage the state, a scientifically based policy is needed that can give an answer to what, how and why it is happening in the world, what it experiences, what are the perspectives of this world and who interferes with it and how it, the world, and therefore our future! And if a person really perceives what is happening in life through the prism of personal experience, which, by the way, young people simply don’t yet have, so that a person’s opinion corresponds to the truth of life, its surviving moment, it must be shaped in the context of history, which is why they distort it from the silent , unfortunately, the consent of the authorities, which is YOUR considerable guilt, as well as in those events on the Hill of Glory in Lviv and outrage upon the monument to V. I. Lenin in Kiev - all this is in YOUR conscience. And that distorted as “oral history” confusion of subjective opinions, memories and immature assessments, or even just provocative inventions, and impose on young people. And despite the fact that the truth was separated from the opinion back in Ancient Greece 2 500 years ago!

Self-organization in society is not anarchy, it requires management — specifying the direction of work, because it is a means of activating and liberating initiatives at the bottom of society and the state, and not a means of breaking them. For this and there are state administrations in the field.

The country is in danger - an unconstitutional insurgency is developing.

IT'S TIME TO PROTECT THE CONSTITUTIONAL BUILDING OF AN INDEPENDENT STATE OF UKRAINE!

We urge YOU and together with YOU all public organizations of our Ukraine to stand up for her defense!

By order of the officers' meeting, the chairman of the Kremenchug branch of the Union of Soviet Officers of Ukraine, Colonel V.V. Slipchenko

Ctrl Enter
Noticed oshЫbku Highlight text and press. Ctrl + Enter
We are
Comparison of the current Constitution of the Russian Federation and the Stalin Constitution 1936 of the year.On the other side of the “red” and “white”. Izborsk Club Report
Military Reviewin Yandex News
Military Reviewin Google News
32 comments
Information
Dear reader, to leave comments on the publication, you must sign in.