60 years ago the first nuclear submarine was launched

January 17 2014
26
January 21 1954, exactly 60 years ago, the submarine fleet took a big step forward. On this day, the world's first nuclear submarine descended from the shipyard Groton in Connecticut. The launch of the boat was personally attended by President Dwight Eisenhower. The boat was named "Nautilus" in honor of the submarine from the science fiction novel by Jules Verne, which was written in 1870 year. Currently, the boat has been converted into a museum of submarine forces of the US Navy, it is moored to eternal parking in the harbor of Groton. Every year the boat is visited by hundreds of thousands of tourists.


For the first time the famous French writer Jules Verne popularized the idea of ​​using a submarine in combat in his famous novel “20 Thousand Leagues Under the Sea”. Prior to that, Leonardo da Vinci, a famous Renaissance genius, reflected on such a ship. In Jules Verne's novel 1870, a submarine called the “Nautilus” was described, which could destroy surface ships with the help of a special ram - a metal “tusk” that was placed on the bow. In the science fiction novel, neither torpedoes nor any other weapon, which could be placed on board the boat.

It is worth noting that attempts to build a submarine have quite a long history. The first operating model of such a vessel was built in 1620, the Dutch engineer Cornelius van Drebelbel on the orders of the British King James. The boat was built in London and successfully tested in the Thames. That submarine was rowing. In our country, attempts were made to build such a ship under Peter I. But the real flowering of the submarine fleet waited only by the beginning of the First World War. At this time, there were massively submarines equipped with a diesel engine, which could be used on the surface, and an electric motor intended for movement under water. The diesel engine of the boats was connected to a generator that generated the electricity needed to recharge the boat batteries. 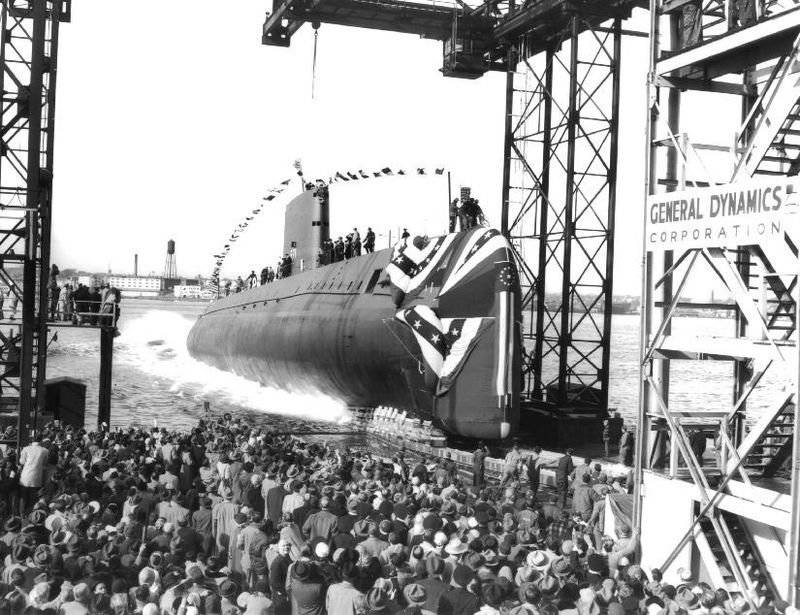 The accelerated pace of development of submarines during the First World War led to the fact that this class of warships turned into a very formidable weapon at sea. In total, during World War I, 600 submarines of the warring countries sank 55 large warships (cruisers and battleships), 105 destroyers, and 33 submarines. During World War II, the submarine fleet reached even greater prosperity and power and was actively used in all sea communications.

After the end of World War II, the submarine fleet was waiting for a new era. Submarines equipped with a nuclear power plant appeared. The first nuclear submarine was built in the USA. January 21, 1954 the Nautilus boat was launched, and 8 months later it was put into service by the American fleet. The Nautilus submarine, with a total length of 97 meters and a width of 8,2 meters, had a displacement of more than four thousand tons. This submarine set a record (for the US Navy) of being under water without surfacing, and was also able to develop an underwater speed of 20 knots. In addition, this submarine was the first in history that managed to pass under the ice of the North Pole. It happened on August 3, 1958.

The history of the submarine "Nautilus" 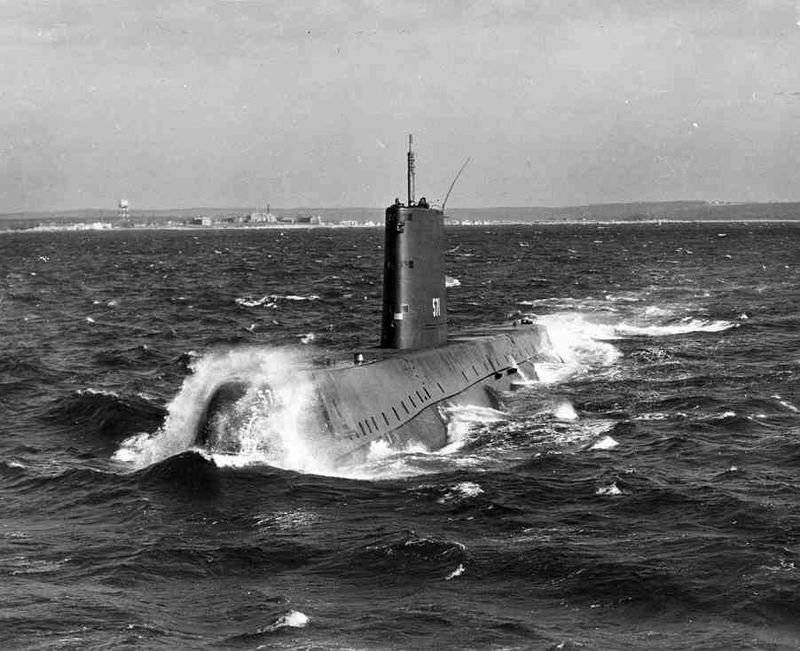 Immediately after entering the submarine into the US Navy, it was established that the radar and anti-submarine aircraft, which played a very large role in the fight against submarines during World War II, were ineffective in the fight against this boat. The ability of the PLA to quickly change the depth of the dive and move quickly, as well as being submerged for a long time, caused a review of the tactics of the submarine war.

Nautilus outwardly looked like German submarines of type XXI. PLA had the same rounded bow, body shape, it also used 2 screws. The boat had a large diameter - 8,2 meter, which gave a large amount of internal space. The submarine hull was partially double, with an extension for the installed reactor. The submarine consisted of a bow, crew quarters with a galley, a boat control center, a power plant and a steering part. The buoyancy reserve of the Nautilus PLA was equal to 16%. In the submerged position, the boat could reach the speed of the 23 node, in the surface position - the 20 nodes. The surface displacement of the ship is 4157 tons, the underwater displacement is 4222 tons. The longest is 97 meters. The total power installed on board the boat nuclear power plant was 13 800 HP

The armament of the submarine consisted of 6 torpedo tubes of caliber 533 mm, the boat had 26 torpedoes to them. When building a submarine, the possibility of installing RGM-6 Regulus missiles on board was considered, but because of the very high complexity of this project, it was decided to stop working on it. The crew of the submarine "Nautilus" consisted of 13 officers and 92 sailors. 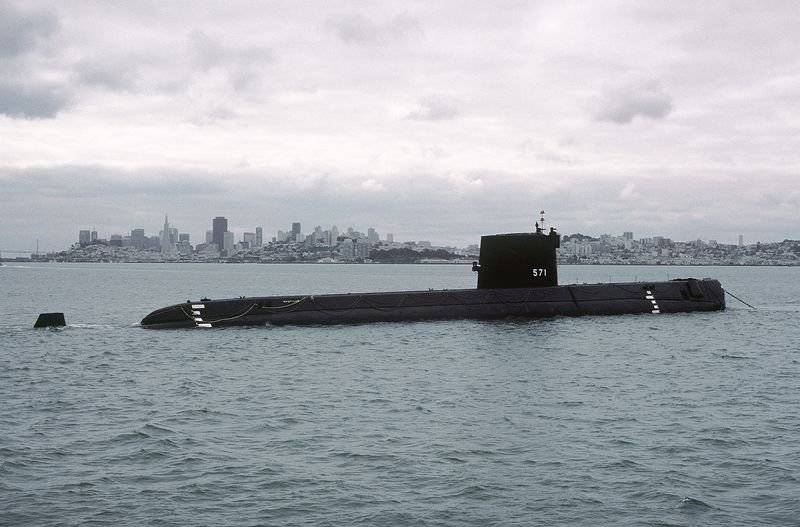 As with any ship of a fundamentally new class, not everything went smoothly with the Nautilus boat. Almost immediately, unsolvable problems arose with the submarine, the largest of which was a terrible noise, the cause of which was the strong oscillations of an unidentified kind. The waves that the Nautilus created caused vibrations of the boat structures with a frequency around 180 Hz, which dangerously approached the values ​​of the hull's vibration. The coincidence of these vibrations could lead to resonance and destruction of the submarine.

In addition, it was possible to establish a very high vibration of the ship hull when moving at a speed of more than 16 nodes. The noise, which was created already at the speed of 8 knots, and the vibration were an obstacle to the normal launch and control of torpedoes. At the speed of 15-17 nodes, people on board were forced to talk using a shout (otherwise they would not hear each other). Such a high noise level made the sonar useless already at the speed of the 4 node. After that, the submarine became deaf, moreover, such a noise very much unmasked the submarine. All of this was gained during the operation of the negative experience of American engineers took into account when developing boats following projects.

A rather interesting story is connected with the submarine "Nautilus". 3 August 1958, the ship set a record. Having passed 3400 km approximately in 100 hours of navigation, the submarine was the first in history to reach the North Pole of the Earth. American submariners passed under the ice of the Arctic at a depth of about 100 m. At the same time, such a journey required a long preparation from the crew and the ship. It was possible to carry out a campaign only from the 5 th attempt. The crew encountered the greatest difficulties during the passage of the Bering Strait: the depth of the lower edge of the ice in the strait reached 18 meters. During the first attempt to pass through the strait, the boat was forced to turn back due to lack of clean water between the ice field and the bottom of the strait. The second attempt was successful, and the boat, breaking the strait, along the coast of Alaska, passed to the North Pole. 3 August for the first time in the history of the submarine fleet the boat crossed the North Pole and returned to the shores of Greenland. 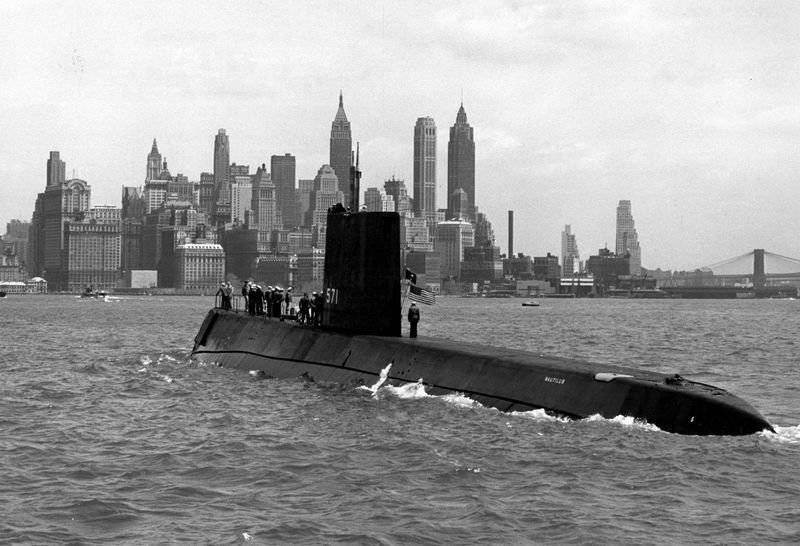 Those years were years of continuous technological race of the two superpowers during the Cold War. Americans by all means tried to "rehabilitate" because of the space satellite launched by the USSR, which became the first artificial satellite of the Earth. Overtaking the USSR was a matter of honor for Americans, well, and in what exactly to overtake, it had no fundamental significance for the USA. As a result, the US military were able to take the 1-e place in the submarine race, although the USSR did not officially acknowledge the fact that the Nautilus PLA was passing in the territorial waters of the USSR in the Arctic.

Total submarine "Nautilus" set several records for submarines. The main of them is considered to be continuous scuba diving, which lasted more than 90 hours. Being under water, the boat passed 1213 miles (2250 km). PLN "Nautilus" was in service until the 1972 year, after which it began to be used exclusively for educational purposes, and 6 June 1985, converted into a museum.

Today, 5 states of the world possess nuclear submarines of their own designs - these are Russia, the USA, France, the United Kingdom and China. On arms of these countries is more than 100 modern nuclear submarines. Another country that possesses such weapons was India, which in 2012 received its first nuclear submarine of the 971 “Schuka-B” project - leased from Russia for 10 years.