The global crisis and the “yellow threat” led to the arms race of the countries of the Asia-Pacific Region. Part of 4. The threat of the emergence of "Asian NATO"


The main opponent of China in the APR is Japan. Sino-Japanese Wars 1894-1895 and 1937-1945 created a powerful foundation of mutual hostility. At present, most Chinese and Japanese dislike each other. So, in August 2013 of the year, a survey was conducted, which showed that the Chinese and the Japanese have a very bad opinion about each other in the last nine years. About 93% of Japanese people have a negative attitude towards China, while in China 90% of people hate the Japanese. Apparently, this situation will not change in the near future. Moreover, without a breakthrough in relations between the two Asian powers, relations will only get worse.

However, a breakthrough that normalizes relations between the two countries is unlikely to occur. Tokyo is gradually dropping its constraints, which were imposed as a result of defeat in World War II. Japan has embarked on the creation of full-fledged armed forces with offensive weapons, the development of the military-industrial complex, military cooperation with other countries (India, Turkey, France and the United Kingdom). It is obvious that Japan will soon become a full-fledged military power. And taking into account its economic power - and one of the leading military powers.

Signs that Japan no longer intends to experience an inferiority complex about its participation in World War II, are becoming more and more. So, at the end of December, the “militarist” Yasukuni temple in Tokyo was visited by Japanese Prime Minister Shinzo Abe. In the spring, the 2013 deputies of the Japanese parliament visited the temple. Most are from the ruling Liberal Democratic Party and the Japan Renaissance Party. Earlier, the temple, where the souls of all warriors who sacrificed their lives for “the emperor and great Japan,” is worshiped, was visited by the deputy head of the government and the minister of finance. At the beginning of 169, the Minister of Internal Affairs and Communications of Japan Yoshitaka Shindo honored the memory of the defenders of Japan.

In general, the Japanese can understand. You can not repent forever for the mistakes of ancestors. The Japanese, like the Germans, were appointed the main culprits of the Second World War, although the real instigators of the war — the United Kingdom, the United States and partly France represented by the “financial international” —had remained in the shadows or even enrolled in the camp of winners and “innocent victims” of aggression. The Japanese nation has every right to be proud of its history. For centuries, Japanese warriors have shown themselves to be a skillful and strong adversary that commands respect.

The formation of the Japanese defense strategy and the military budget of Japan directly depends on the development of China and the situation on the Korean Peninsula. Do not forget to follow the situation in Russia in Tokyo. Japan is opposed to the development of the DPRK nuclear and missile programs. Tensions on the Korean Peninsula and the Pyongyang test of a ballistic missile led to the active participation of Japan in the US missile defense program.

Japan's self-defense air force to replace the outdated third-generation multi-role fighter F-4EJ, a modification of the American F-4 Phantom II bought the F-35A fighter. Japan plans to get an 42 aircraft. In the summer of 2012, the Japanese government entered into a contract with Lockheed Martin, a US company, to supply the first four X-NUMX-generation fighters of the F-5A Lightning II. At the same time, the Japanese stepped up a program to develop a fifth-generation ATD-X Shinshin national advanced fighter. On 35 year, the first flight of the prototype fighter is scheduled. In 2014, the prototype for testing should get the Japanese Air Force. In the future, this aircraft should replace the Mitsubishi F-2015 (the Japanese version of the American F-2 combat aircraft).

Japan is also increasing naval shock forces. Japan’s naval self-defense forces in 2012 put the lead ship of the 22 DDH project (they plan to build two helicopter carriers). In August, 2013, the ship was launched. This is the largest warship built in the shipyards of Japan in the postwar years. Many experts call the Izumo a light aircraft carrier, since with a slight modernization it can accommodate vertical take-off and landing fighters. In addition, Japan in the 2009-2011 years received two squadron destroyers of the "Hyuga" type. It is possible that two more such ships will be built. 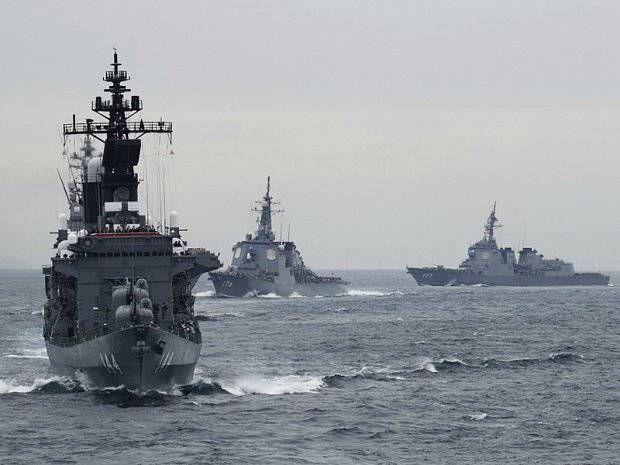 Japan continues its Soryu-class submarine construction program. The Navy received five submarines in 2009-2013. At the end of October 2013, the sixth submarine was launched. She will be part of fleet in 2015. Two more Soryu-class submarines are being built. The plans for the construction of several more submarines. The Ministry of Defense of Japan also plans to build two new destroyers with the Aegis system. Currently, Japan has six destroyers equipped with the Aegis system and SM-3 long-range anti-aircraft missiles.

At the same time, Japan decided to review the ban on the sale of military products to other states and intensified military-technical cooperation with other states. In 2012, Japan and the United Kingdom signed a cooperation agreement on joint arms development. This was the first such agreement that Tokyo concluded outside its allied relations with the United States. In the fall of 2013, Japan began negotiations with Turkey on joint work in the military field. In particular, we are talking about creating a joint venture to develop and manufacture engines for the main combat tanks. In early 2014, military-technical cooperation between Japan and India intensified. The Indian military has expressed willingness to purchase Japanese seaplanes. On January 9, Japan and France agreed to strengthen military ties and increase military-technical cooperation. Key priorities: aviation unmanned systems, helicopter engineering and submarines. 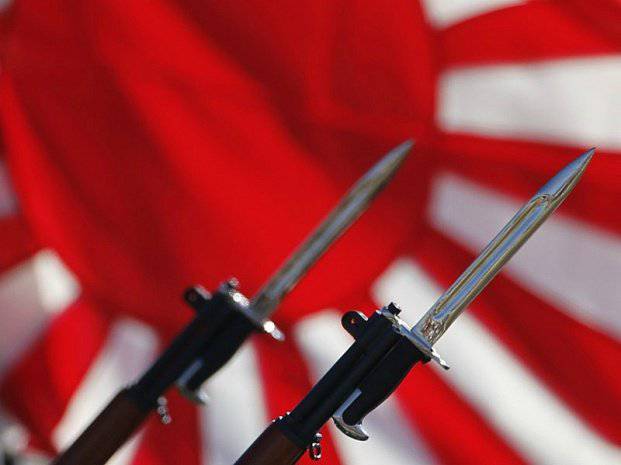 Dispute over the islands

The Japanese-Chinese conflict over the Senkaku Islands continues. A few days ago, Japan held exercises. During the “Defense of the Islands” maneuvers, the Japanese airborne units dislodged the enemy from their land. Defense Minister Itunori Onodar said that Japan was ready to reliably protect its territory and the waters around the Senkaku Islands. At the same time, Japan announced a decision to nationalize another 280 of islands - in order to determine the boundaries of territorial waters.

In turn, China has unilaterally imposed restrictions on fishing in the South China Sea. New rules entered into force on January 1, 2014. According to these rules, a foreign fishing vessel, intending to enter the waters that China considers its own, must first obtain permission from the Chinese authorities. The Japanese secretary of defense called Beijing’s actions a threat to the “existing world order,” and Washington described Beijing’s actions as “provocative and potentially dangerous.” Tokyo and Washington want to involve other APR countries in the anti-China “front”, including Vietnam and the Philippines, which have territorial disputes with the PRC.

Having no hope of gaining a concession to Japan in the dispute over the Senkaku Islands, China decided to change tactics and get the support of the world community. Beijing complained to the UN and called on Japan to be condemned for the visit of the head of government, Shinzo Abe, to the Yasukuni temple. At the same time, China suspended three exchange programs with Japan. Beijing is trying to draw the attention of international organizations to the problem and to involve the world community in the discussion of the conflict. 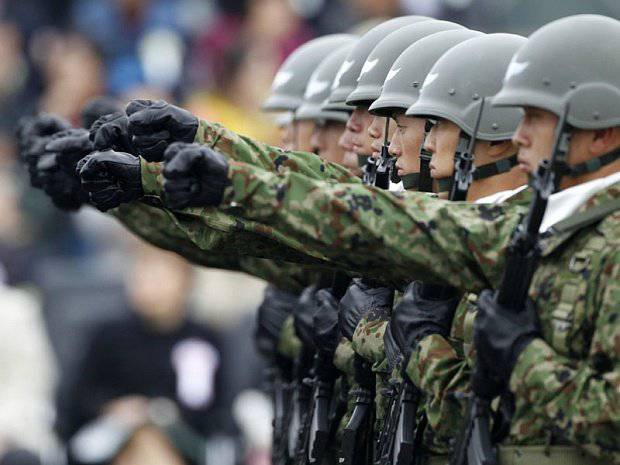 James E. Lyons, the highest military representative of the United States at the United Nations, former commander-in-chief of the Pacific Fleet, and Richard D. Fisher, Jr., senior fellow at the International Center for Evaluation and Strategy, published an article in the American edition of The Washington Times to create an analogue of NATO in Asia . In the article, the authors expressed concern about the growing aggressive policy of China, which increasingly challenges the US leadership in the region and the Asian allies of America.

Lyons and Fisher Jr. believe that if the US wants to maintain its leading position in the region, then “NATO in Asia” would be an ideal option. True, they immediately note that so far this is an unrealistic option, given the contradictions between a number of APR countries. So, strong contradictions exist between two allies of the USA - Japan and South Korea.

More realistic, according to the authors of the article, is another scenario. Many APR countries prefer informal cooperation in the defense sphere, and this allows the US to play the role of a stabilizer of the situation. The United States can broaden and deepen the already existing bilateral defense treaties. However, such a strategy should be supported by the modernization of military forces and means of deterrence, the cessation of the process of reducing nuclear disarmament, work on new types weapons, including tactical missiles and energy weapons.

It should be noted that in the West more than once raised the issue of creating an "Asian NATO". Back in 2007, Republican Rudolf Giuliani, being a presidential candidate, proposed expanding the North Atlantic Treaty Organization to include Israel, India, Australia, Singapore, and Japan. It should also be noted that American troops are already in Japan, South Korea and Australia. The US is creating a naval base in Singapore, actively cooperating with the Philippines. Recently, the United States has been actively increasing its military presence in South Korea. The US military contingent in South Korea will reinforce with another infantry battalion with tanks and infantry fighting vehicles, it will receive the 1-I brigade of the 2-th Infantry Division. In 2013, the 23 battalion of chemical troops and a squadron of OH-58D combat reconnaissance helicopters were returned to Korea. In addition, recently the NATO countries have been actively seeking an alliance with India.

In general, the likelihood of creating an "Asian NATO" exists. The security problem may push many Asian countries into the ranks of the anti-Chinese coalition being created by Washington. In addition, some APR states are de facto under American occupation (Japan, South Korea), and even more states are in informational, ideological, and financial and economic dependence on the United States. The United States will either be able to find "cannon fodder" in the fight against China, or they will be ousted from the region. I must say that in the role of "cannon fodder" in the fight with China they want to use Russia as well.