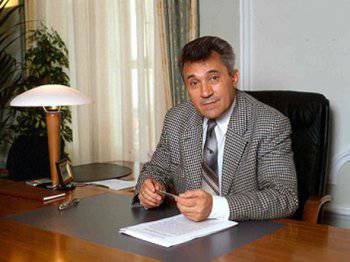 Common expression: there is a lie, there is a big lie and there is statistics. But people who have to keep an honest record of everything in the state are akin to intelligence officers. It is they who give the leadership of any country information on how and where to direct their efforts in order not to get surrounded, not to lose the battle, not to lose personnel - the population.


Unfortunately, the Russian statistics is sick with a known disease - fraud. Why and how is state reporting formed? This is the main issue of the meeting of the Academy of Sciences with the most famous Russian scientist in this field, the ex-director of the Scientific Research Institute of Statistics, Doctor of Economics, Professor Vasily SIMCHERA.

- Vasily Mikhailovich, let's summarize some of the results of last year ...

- For example, the prime minister in December, 2013, declared that our GDP grew by 1,4 – 1,5%. This is within the margin of error. Further. According to Rosstat, inflation was 6,5% versus 6,6% last year. This is four times higher than in the crowded US with fictitious money, and almost three times higher than in the declining Europe, as in war. Agriculture grew by 6,8% against its decline in 2012 by 5%. Total - 1,7%. Again within the margin of error. The trade surplus in our reporting year will be 146,8 billion dollars. In 2012, it was off the list for 200 billions. Fall - 44 billion dollars. The answer to the question "why?" - no.

- But the prime minister relies on the reports of your former colleagues.

- Rather, businessmen from statistics. In their reports, everything positive is overstated, they try to hide the negative. Do not tell the truth - it does not mean to lie - this is the bible of the current schemers. What for? In order not to upset the master.

- That is, the country's leadership receives false information from Rosstat?

- Unfortunately yes. In many ways incomplete, distorted and opaque information, fabricated under pre-asked questions with previously known answers. The reason is that people who serve custom purposes will serve only the customer. Therefore, state statistics organizations must be independent, not serving. I had a serious conflict with the Ministry of Economic Development, when he was headed by the current head of the Central Bank Elvira Nabiullina. I refused to give false data on GDP growth. He was no longer in 2010, but Rosstat was subordinate to the Minister. And how can you check the work of your superiors with numbers ?! Later, the president reassigned our department directly to the government. Dependencies diminished.

- Is it possible to manage the state if you do not have accurate statistical data?

- You can manage, but it will not be long and with a sad outcome.

How much is a house to build and sell the plant

- Some officials call you a traitor for criticizing the significantly underestimated assessment of Russia's national wealth. Official data - 4 trillion rubles. You count - 40 trillions.

- Four trillion are the most modest estimates of the residual book value of fixed assets and tangible assets. Without intellectual and financial assets. But the latter are now estimated in the world much more expensive than the value of tangible assets and natural resources. And the 40 estimate of trillions of dollars includes them in the price.

Secondly, everyone knows that the book value of any apartment is several times less than its market price. This also applies to industrial enterprises. Authorities profitable to lower the real price. After all, the side that buys any state assets is power intertwined with oligarchy. They are appraisers, and they are buyers. But if the state needs to buy something back, then the price will be completely different.

- The share of foreign capital in the Russian industry, according to the declared data, is 20%, and in fact, 75%. That is, 75% of the Russian economy belongs to foreigners?

- Nominally, almost all of our enterprises are registered for residents with Russian passports. The substitution scheme is simple. The Chairman of the Pound takes over, a company with a share capital of 10 thousand rubles is registered for it. Shares of enterprises are bought up. But in fact, Western players are behind his “Horns and Hooves”.

So if you distribute ownership of Russian assets according to the form of ownership and by owners, then not even 75%, but all 80% belong to foreign owners. But this does not fix the official reports. They report only on the first level of owners, as in the kingdom of curved mirrors. But then the question arises - in the interests of whose economy decisions are made in the name of the government?

- Can you talk about specific enterprises?

- No, I operate insider information and must receive permission to use it in the open press. Under current legislation, all information about individual legal entities and individuals is considered confidential and is not subject to public disclosure. Meanwhile, this kind of information should belong to everyone. And she made a secret from society. It is necessary at the legislative level to resolve the issue of opening information about all the ultimate founders of companies. Including foreign founders of the largest state corporations. Then a lot of curious will pop up. After that - an inventory of the assets of all enterprises and organizations. Then we will understand how much our assets really cost and to whom they belong.

By the way, the Bank of Russia is doing this. There is a law initiated by V. Gerashchenko and T. Paramonova, according to which foreign capital in Russian banks should not exceed 12%. The current reporting of the Central Bank in the office provides for the disclosure of information on all generations of the founders.

- Does the Ministry of Economic Development have the right to such actions?

- Not. Therefore, I argue about the need for the same law for all enterprises. And above all, for companies with a predominant share of foreign capital, positioning themselves as a national treasure. I think that it will eventually appear. We must know who is the master of the house.

- While we are not home?

- International laws prevail over Russian ones. This is a sign of a colony. If really I am right and 80% of our economy belongs to foreigners, it means that we have lost control over the domestic economy. This is the second colonial sign. And it is monstrous.

Wallet Wallet What is wallet?

- According to statistics, the average salary in Russia reached almost 30 thousand rubles. Do you agree?

- Of course not. Really two times less. If we “clean out” our wages, exclude the multimillion-dollar “wages” of our oligarchs and other richest segments of the population and dividends of foreign beneficiaries and at the same time add the income that people receive as a result of intensive labor and processing, wages in envelopes and a number of other positions, then 14 – 15 thousand per person. It would be much more honest to consider average salaries separately from incomes of the rich. But then the numbers would have killed the whole myth of the rising standard of living. Except the richest, of course.

Take the indexation of incomes of the population. It seems that every year the same pensions and benefits are officially increased to the level of inflation. But consumer prices for the cheapest goods that pensioners and other poor segments of the population buy only, are growing at the highest rates. Annual inflation for the poor is not 6,5%, but 18%. That is, pensions do not increase, but actually decrease. The increase in real labor pensions in general was a tiny amount - in general, over the past year, 1,3%. The real monthly increase of the whole 334 ruble, not 952, about which the authorities are constantly talking.

- This is the index of consumer inflation for the poorest. Price index calculated on the range of goods and services that people buy. And not because of the “set” that fixes the cost of living and official inflation. For example, penalties have increased 10 times. It will not be included in the official statistics. Funeral services on 20% are also not taken into account. And so on a variety of positions. A statistical tool has been created that does not take into account real differences in needs and the standard of living of different segments of the population. I estimate the total real inflation for the well-to-do class of the population at 9 – 10% per year. For the middle class - 12 – 15%.

- We are talking about fictitious real wages. But official and unofficial figures do not agree with the unemployed either ...

- There is a level that is recorded as the number of registered unemployed - 1,2 million people. This is the minimum and inadequate assessment. Even more 7 – 8 millions are looking for work for a long time - more than a year. Already we get 8 – 10 millions. It also does not take into account that more than three million jobs were occupied by migrants, while displacing local residents who remained unemployed. Already 11 – 13 millions actually unemployed. This is 20% of the total working population of Russia. Therefore, the words of Prime Minister Medvedev - the more migrants we have, the lower the unemployment rate is complete nonsense. The indigenous population is simply replaced by migrants.

- In the budget for 2013, the year reduced all non-core expenses of the state: medicine, education, culture. How much does our officials actually invest in native human capital compared to other countries?

- On average, four times less than the EU countries invest. And these numbers go down all the time. When the Soviet Union invested a total of 30 – 33% of the total budget. Now less than 10%. Besides education, medicine is also a science and a sport. The state has thrown all its duties on the person himself.

- Is it true that you left the Scientific-Research Institute of Statistics with the phrase: “Tired of lying”?

- Not. For 11 years, when I worked as an institute director, I fought liars. So I said: “I’m tired of fighting those who are lying.”