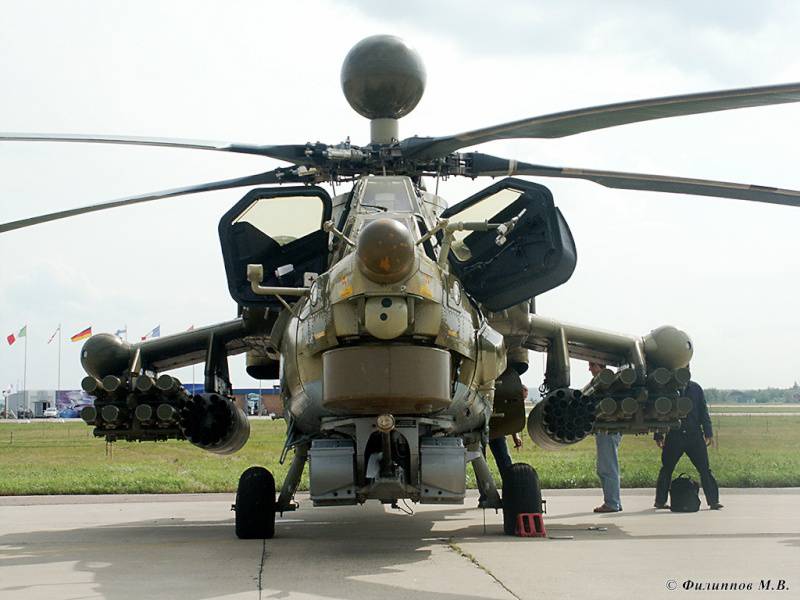 In the Russian army, everything changes: from life of soldiers and ending with the development of modern weapons. Already, outsourcing companies perform an enormous amount of work that recruits used to do. Sergei Shoigu, the Minister of Defense of our country, is doing a lot to really increase the level of our defense capability. Huge funds are allocated for this and, of course, this brings its results.

The other day on armament of the Russian army Another development was officially adopted - the modern modification of the Mi-28 helicopter - the Night hunter Mi-28H. this was announced by the press center of the holding "Russian helicopters". According to the information agency RIA News This is the most terrible domestic weapon.

Mi 28 - combat attack helicopter designed to search for and active fire destruction of armored vehicles, manpower, slow air targets. From the name it is obvious that this model was created for hitting targets in the conditions of the night.

The soldiers are already prepared for the use and management of this sample: before the official commissioning, the helicopter was used in military units for several years and was tested in a variety of conditions.

What is so good night hunter?

All military pilots know how difficult it is to solve combat missions in the dark. Obviously, development at the level of night vision devices, cameras and locators will not solve the problem.

For a real advantage over the enemy, more intelligent and modern technologies are needed. Doctor of Technical Sciences, chief designer of the instrument-making bureau Givi Dzhangdzhava, started creating a highly intelligent machine. For this, the complete integration of all onboard equipment was implemented. The control of the machine, control, indication and preparation of the Night Hunter for flight became a single complex. Software with an open architecture allows you to constantly increase the functions and adapt new tasks to the mortgaged programs. All communications are implemented on high-level multiplexed channels of information exchange. This makes it possible to connect any equipment and equipment.

The inertial system of the helicopter during any maneuvers determines the coordinates of the helicopter in space and reports the information to the pilot. The relief of high-resolution fighting is displayed in three-dimensional graphics.

A modern set of indicators works without active radiation.

Works fine and automatic control mode. Information about obstacles immediately issued to the pilot. This makes it possible to even fly at night at an altitude of 5-15 meters in difficult weather conditions. It is also very convenient to perform hostilities while in the folds of the terrain.

The thermal station gives an image in any direction indicated by the turn of the pilot's head.

Each part of the system can operate autonomously. In case of an accident, each crew member has a group of backup devices.

The accuracy of the gun is not enough, but it is possible to develop a more advanced model. Missile armament includes supersonic SD Needle, Sturm missiles and guided Attack-V. They are completely autonomous after release.

The national military-industrial complex pleased us with such a magnificent model of modern weapons. Changes in the Russian army do occur, conditions of service have improved, improvements have occurred life of soldiers technical equipment.