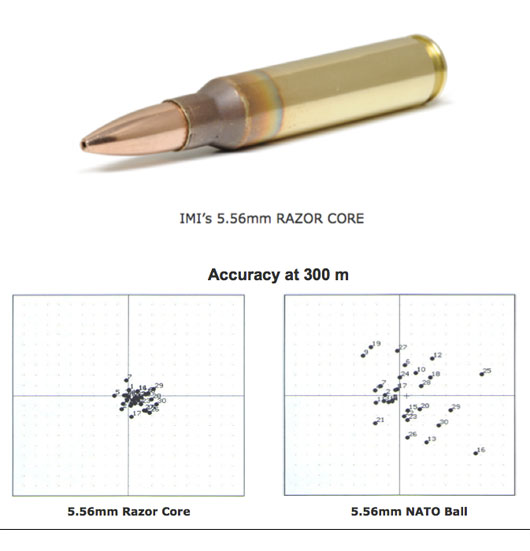 The Israeli military industry (Israel Military Industries, IMI) has announced the release of a new 5,56-mm cartridge, which has increased performance and is called the Razor Core (core shaver). According to the vice-president and managing director of the IMI small-caliber ammunition department, Yitzhak Shmilovich, the new cartridge provides higher accuracy and an effective stopping effect at an increased distance to 600 meters.

Shmilovich said that these characteristics of Razor Core make it attractive for use in special operations. “Razor Core provides excellent performance at a very competitive price.”

Shmilovich confirmed that the new cartridge is already in production and was successfully tested in battle by an unnamed client. The cartridge with 77 grains is intended for use in weapons with a barrel with a standard 1: 7 rifle, both with a shortened and a long barrel, such as on the M4 and M16. The bullet trajectory almost corresponds to standard ammunition, and, therefore, there is no need for gun sighting when switching from one type of ammunition to another. According to IMI, the Razor Core cartridge was originally intended for use by the military and law enforcement agencies, but its accuracy and accessibility make it also suitable for the commercial market and sports shooting.