January 17 2014
94
Earlier this week, the chairman of this club, Academician of the Russian Academy of Sciences Yevgeny Primakov spoke at the meeting of the Mercury Club, an institution for the formation of active interaction between business and government. Evgeny Maksimovich from September 1998 to May 1999 headed the government of the Russian Federation. He headed, having received it "in the inheritance" after the monstrous economic crisis, in which Russia hit 1998 in August. Primakov’s speech came out very sharp, and the main critical arrows of the former prime minister were addressed, as he himself called them, to the neoliberals - people who today pretend to know how to manage the Russian economy. 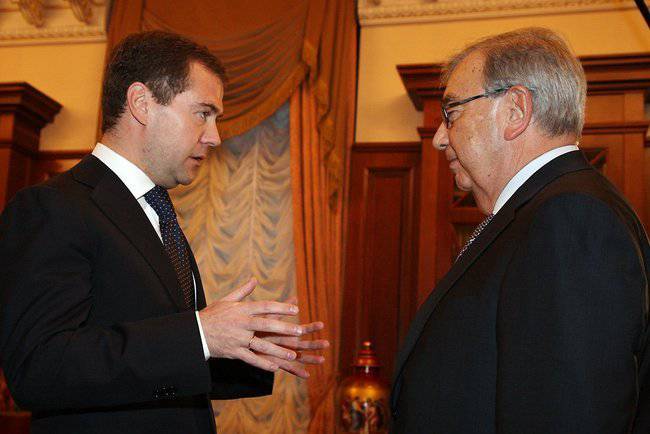 Yevgeny Primakov connected his speech with the December message of President Vladimir Putin to the Federal Assembly and, in particular, with the economic problems that the country faces. The main thesis of the chairman of the "Mercury Club" is, quote: the need to counter the policy of neoliberals in Russia ". At the same time, Primakov unambiguously makes it clear who he defines with such a term: these are representatives of the current Russian government with rare exceptions (among those whose views Primakov does not see neoliberal, the Deputy Minister of Economic Development Andrei Klepach is named, for example) and some non-governmental economists with specific views.

What exactly is the former chairman of the Russian cabinet of ministers accusing those people who are trying to steer the domestic economy? These are several positions at once that look like this:

At firstPrimakov is depressed by the fact that most modern economists who are in power continue to drive the economy along ultra-liberal rails, insisting on continuing full-scale privatization and, as a result, continuing the transition of many strategically important companies exclusively into private hands.

Secondly, the former head of government, frankly wonders why economic authorities instead of the much-needed support of the real economy (modernization and expansion of production capacity, training of qualified specialists) today take the position of activating the work, in fact, of accounting organizations - numerous banks - banks, which, by crediting production enterprises, expose prohibitively high interest rates, leading to the complete ruin of production.

Thirdly, Yevgeny Primakov makes it clear that today's neoliberal economic policy leads to an artificially faster growth of tariffs, which ultimately hits both producers and consumers of certain goods and services.

Fourthly, criticism is aimed at unintelligible management activities and the inept control over the expenditure of funds and the quality of work performed.

If Primakov had been evaluating, then his assessment of the work of today's government economists would be unequivocal - a fat "bad". The former prime minister makes it clear that the state of the Russian economy today is such that it leads to the neoliberal rails described by the Austrian economist Friedrich Hayek (the state’s complete exit from the economy to ensure healthy competition and related growth). government, just stupid. Primakov gives a concrete example, which shows that even the countries of the developed free market after the economic crisis of 2008-2010 came to the idea of ​​revising the interaction between government and business. In a number of Western countries, the state has allowed itself direct investments in those projects that for a long time have been positioned as purely private. These direct investments have helped keep entire sectors of the economy afloat and level the situation. Our economists, for some unknown reason, continue to follow exactly the path that led the Western economy (and the Russian economy is strung on it today), to a serious crisis - to a crisis that many economies in the world cannot recover from to this day.

Primakov actually calls for more full participation of the state in the economy, the introduction of certain norms of strategic planning, without which the Russian financial system will operate in the Russian roulette mode - while the “shots” are not lethal, but the psychological state of them is close to shock. Is it possible to achieve significant results in such a state? Obviously, no, and Primakov, academician of the Russian Academy of Sciences, speaks directly about this in his report, which is more like not a usual “club” performance, but a message addressed to people holding the reins of economic governance in their hands. The message is actually based on the main thesis: Stop and think again!

Primakov, and not only him, is well aware of the consequences of the unlimited liberalization of the economy, which (liberalization) was actively promoted by the “young reformers” in 90's, in effect shifting the fading economic model to Russian soil. All those liberal economic efforts led to a default, impoverishment of the country, the collapse of the industrial sector and social tensions. Obviously, if the scenario is neoliberals (this is what Primakov himself calls these people), if the market is again turned into an uncontrolled "Russian field of experimentation" (and is it a Russian? ..), then Russia will again be in spite of years.

In his report, Yevgeny Maksimovich mentions data from the Global Wealth Report analytical center for the 2013 year, which indicate that today, more than a third of all Russian assets are in the hands of a narrow circle of Russian oligarchs. 110 billionaires with a Russian passport (and often not only a Russian one) manage to make 35% of the domestic economy work solely in their own interests. And it is unlikely that one of the prime oligarchs is seriously worried about whether the all-Russian economy is growing, marking time, or rushing down, if the financial affairs of the “money bags” themselves go uphill. Which one of them will come to his head to invest in major infrastructure projects, which can begin to bring tangible income no earlier than through 10, or even more, in years. So people need everything at once, here and now.

I wonder what conclusions from the speech of Primakov did the people to whom he actually turned? It is very likely that those who actively preach the "religion" of economic neoliberalism (and in the economic bloc of our government today, apparently, the majority) will do everything so that the theses of Yevgeny Primakov not be noticed by themselves, and that’s all so that others would not pay attention to these theses. They say, what you take from Primakov, a conservative, is an elderly man, a man with a socialist understanding of economic development - is it worth paying attention to his today's speech ...

Yes, socialist notes in the economy - this is the main poisonous pill for all those who are part of a narrow circle of the Russian oligarchy. How can these people allow the economic model to be built not on the principle “grab, how much you will carry”, but on the principles of rational planning and healthy competition? They have done their utmost to avoid the possibility of implementing such a model, hanging noodles on the ears of the people that this is the only way to build a “bright capitalist future”. The main goal of the neoliberals is to remove all strategically important enterprises from under state control with the help of new steps of old privatization, squeeze out all the juices from these enterprises, and then either just crush and leave to fend for themselves, or expect new budget investments for self-rescue under the slogan salvation Russian production.

Is it possible today the transition of the Russian economy to the model in which the state plays a weighty, but not overwhelming, role, stimulating the most important infrastructure and production projects, based on a strategic planning system? Is it possible today to achieve real competitiveness and the effective development of small and medium-sized private enterprises? All this is quite possible, but only when performing an important component: an unambiguous approach to the economic neoliberals in power and authority - free your chairs and cabinets and look for work in the local accounting department! Another question: is there a real power in Russia today that can so smartly wave a “broom”, especially considering the presence of billionaires mentioned by 110 with 35% of assets that (billionaires) hold the entire bureaucratic apparatus, sorry, for the soft spot ...