Two parables that make you think 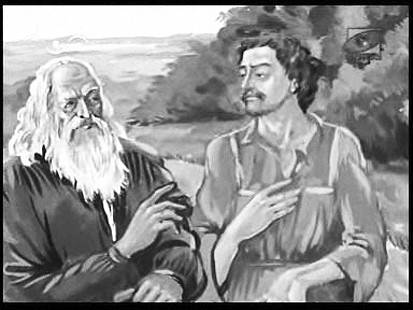 Sometimes important things are easier to tell in the form of a fairy tale. All the nations of the world did so. After some time, another interesting form arose - parables.


The author of the parables is unknown to me.

In the meadow, in the middle of a huge forest, there lived a wizard who had a large flock of sheep. Every day he ate one sheep from the flock. The sheep caused the wizard a lot of anxiety - they scattered through the forest, and he had to spend a lot of time catching one sheep and gathering the others into a herd. Of course, the sheep he was going to kill felt this and began to desperately resist, and her cries frightened others.

And then the wizard decided to come up with such a trick - he spoke to each sheep in private, and inspired something to each. One he said: “You are not a sheep, you are the same person as me. You have nothing to fear, because I kill and eat only sheep, but you are the only person in this flock and that means my best friend. ”

The second he said: “Why do you run away from me like other sheep? You're a lioness and you have nothing to fear. I only kill sheep, and you are my friend. ”

Third he inspired: “Listen, you are not a sheep, you are a she-wolf. Wolf, which I respect. I, as before, will continue to kill every day one sheep from the flock, but the she-wolf, the best friend of the wizard, has nothing to fear. ”

Thus, he spoke with each of the sheep and inspired each of them that she was not a sheep, but a completely different animal, which is different from all the other sheep in the herd. After this conversation, the behavior of the sheep completely changed - they grazed quite calmly and never ran into the forest again. And when the wizard killed another sheep, they thought: “Well, they killed another sheep, and I, the lion, the wolf, the man, the best friend of the wizard, have nothing to fear.”

And even the sheep that he killed, stopped resisting. He simply approached one of them and said: “Oh, my best friend, we have not communicated for a long time. Come to my yard. I need to consult with you about the flock of sheep. ” And the sheep proudly followed the wizard to the yard. And there he did ask his best friend how things were going in the herd. The victim gladly told him everything, and then the magician killed her. Since death came instantly, the sheep did not have time to understand anything.

The wizard was very pleased - he highly raised the self-esteem of each of the sheep, in the end they stopped bothering about inevitable death, became less neurotic, enjoyed life and quietly pinched the grass, as a result of which their meat became much tastier. Over the years, the wizard was easy to manage with a huge herd, and the most interesting thing is that the other sheep began to help him - if any too clever sheep began to guess about the true state of things, then the other sheep .. well, that is, lions, people, wolves - The best friends of the wizard told him about the strange behavior of this sheep, and the next day the wizard ate it with pleasure.

One day, three of his children came to Master Van, and everyone wanted something strange.

“Father,” said the eldest son, blushing and blushing, “I think I love men more than women.” And among men, I love Sun Ahui from a neighboring village more than anyone. He is so ... so! he is like Byakui from Bleach! I understand that you wanted to see in me a support in the future, a continuer of the clan and heir to your skills, but ... I'm sorry, I want otherwise. Nothing, if I bring Sun Akhui into the house, and we will sleep in the same bed and sit by the fire, holding hands?

“Dad,” said the middle son, looking down, “I think I’m a pacifist and I can’t even look at weapon, meat food and other people's suffering. I understand that you would like to see in me a strong warrior, a winner and a defender who will become famous throughout the Middle Kingdom, but ... sorry, I want to be different. Nothing, if you otmazhesh me from the army, and we take to the house of our pig, whom we feed for the Lantern Festival? I will call him Pikachu, I will bathe in warm water, tie a blue bow around my neck, and we will eat only vegetable food with Pikachu!

- Dad! - said Master's beloved daughter Wang, Ma Xian, leading a graceful foot on the clay floor - You know, I am a young, beautiful and intelligent girl. Therefore, I want to realize myself and live for myself. I understand that you would like to see in me a loving wife, a skilful mistress and a caring mother of her many grandchildren, but ... sorry, you will not have grandchildren. Nothing, if I leave the city, become an office worker there, make a career and become childfree? And on weekends I will come to your nursing home on my “Mathis” and buy you a wonderful rocking chair ...

Master Van had already opened his mouth to loudly tell the children everything he thought about them, but he never made a sound. “Is it necessary? - he thought suddenly. - Yes, what right do I have to decide for my children, how they should live, with whom to sleep, what to eat, what to believe? They are independent individuals! So what if the oldest is only seventeen? Just think, I do not like! Nothing, I suffer, but my children will be happy! In the end, the more civilized a person is, the more tolerant he is, so will I really behave like a savage ?! ”
“Well,” he said wearily, “live as you wish.”

... ten years have passed. The children lived as they wanted, and Master Wan was unbearably poisoned and tormented.

He came to a neighbor to share his misfortune and saw that Master Zhang was sitting in the gazebo in front of a rock garden, drinking plum wine and smoking his favorite crooked pipe.
- How are you, neighbor? - asked Master Van.
- Is everything alright? What are the kids?

Master Zhang slowly took a sip from the cup and replied:
- The eldest son married the daughter of a county judge. They live in perfect harmony, the son earns well, they have a big house in the city.

The middle son serves in the imperial cavalry on the southern frontiers of the Middle Kingdom. He is the head of the “long hundred” equestrians. Enemies fear him like fire, friends love him, subordinates respect him, and bosses appreciate him.

And the daughter — well, my beautiful daughter, her beloved husband, and my five grandchildren ...

- Incredible! - cried Master Van. - But didn’t ten years ago, your children, being young, hot and stupid, came to you, wanting something strange ?!
Master Zhang nodded gravely.

- How did you manage to raise such glorious children?

“I just told them that if they didn't stop fooling around, I would interrupt them with a shovel!”

Ctrl Enter
Noticed oshЫbku Highlight text and press. Ctrl + Enter
We are
What you didn't want to know about EnglandSaratov club "Patriot": not to be afraid of the enemy and love the Motherland
Military Reviewin Yandex News
Military Reviewin Google News
6 comments
Information
Dear reader, to leave comments on the publication, you must sign in.