Bandits fired on a humanitarian convoy 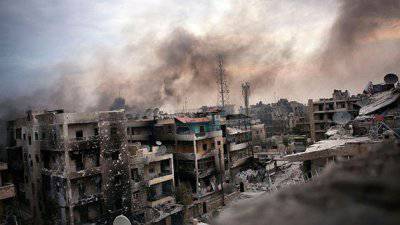 At the end of last year, the propagandists of the “Syrian opposition” spread rumors that people in Damascus had nothing to eat, and the townspeople eat cats. There was even a fatwa issued by one of the Saudi Wahhabi sheikhs that cat meat could be eaten. "Message" then, surprisingly, picked up by many media. The inhabitants of Damascus were perplexed: yes, of course, living conditions are very modest, but bread, rice, cereals, vegetables, fruits, beans - everything that is needed is more than enough. At the same time, the price of bread, if you buy it in state bakeries, has not changed and still amounts to 15 Syrian pounds (3 rubles per kilogram), sugar and rice to most families in general are given out practically free of charge for special coupons, although they have to stand in lines .


So where did the cats eat? The media then gave absolutely unverified information. The Wahhabi sheikh's fatwa dealt with only one place in Damascus - the Yarmuk Palestinian refugee camp. However, this is not even a refugee camp in its usual sense - with tents and field kitchens. This is a fully-fledged residential quarter, with stone houses. It was inhabited mainly by Palestinians, to whom Syria provided shelter. But at the end of 2012, the terrorists burst into it, expelled many, and left the remaining inhabitants in the blockade. On the other hand, the terrorist nest was forced to block the Syrian army. It is not surprising that hunger arose there - and not only among those who remained, but also among the bandits themselves. Then there was a rumor that the people of all Damascus "eat cats", allegedly with hunger. Even appeared in the social networks photo in which a bearded fighter poses with a cat's head in one hand, a little body in the other. In principle, the bandits like him have repeatedly posed with human heads, so they don’t care who to commit such a crime ...

The issue of the humanitarian situation in the Yarmuk camp was discussed at the international level. The patrons of the terrorists did not want to understand that the problem does not come from the leadership of Syria, but from the militants who captured the camp and terrorize its remaining residents.

Many Palestinian public organizations have repeatedly raised the issue of the situation in Yarmuk in Damascus itself. They called on the militants of the so-called “opposition” to leave the camp, leave its inhabitants alone and give an opportunity to all who had to leave their homes to return to them. It was emphasized that Palestinian refugees should not be dragged into a crisis. But, naturally, no rhetoric has acted and does not act on bandits.

During intensive negotiations between the Syrian government, representatives of Palestinian refugees, as well as militants who captured Yarmuk, an agreement was reached on the delivery of a humanitarian aid convoy there. This was considered a “goodwill gesture”.

The United Nations Relief and Works Agency for Palestine Refugees in the Near East (UNRWA) organized the collection and delivery of aid.

But when a convoy with medicines and food approached the camp, he was greeted by ... shots. Terrorist group snipers opened fire on humanitarian aid workers who had to flee.

According to Palestinian Authority Labor Minister Ahmad Majdalani, who is in Damascus, "the Syrian authorities took all necessary measures to send trucks with food and medicine. However, as the convoy approached, the militants who had captured the camp opened fire and prevented its passage."

Majdalani blamed the breakdown of the agreements reached on the militants, for whom “human lives are not dear”, adding that the threat of famine for the residents of Yarmuk remains a reality.

Will international organizations this time - those who shouted about “the guilt of the Syrian government in a difficult humanitarian situation” - face the latest offense of terrorists against people who wanted to deliver food and medicine?

Ctrl Enter
Noticed oshЫbku Highlight text and press. Ctrl + Enter
We are
The UN is waiting for the beginning of the resettlement of families of militants DAISH from Yarmuk camp to the city of Ar-RaqqahSyria: clash of refugees and Islamists began in camp Yarmuk
Military Reviewin Yandex News
Military Reviewin Google News
12 comments
Information
Dear reader, to leave comments on the publication, you must sign in.