Do we need allies in Gastarbeiterstan? 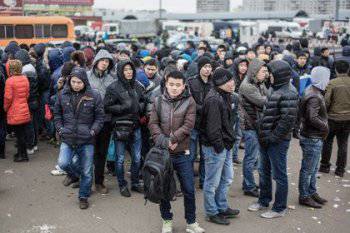 The reason for writing this article was a note I read on "Lenta.ru": "The guest workers offered to unite Central Asia." In short, the essence of the note is that the aforementioned chairman of the Russian movement “Tajik labor migrants”, Karomat Sharipov, has repeatedly initiated the unification of all the countries of the Central Asian region into a single political entity. Well, this comrade sent the corresponding statement to the heads of Tajikistan, Kyrgyzstan, Uzbekistan, Turkmenistan and Kazakhstan.


Actually, there is nothing reprehensible in the idea of ​​unification - who, if not us, is not aware of this. But it was precisely the language used by Mr. Sharipov that strained me. I will give a few quotes.

"Central Asia has long been" the object of the claims of the world powers "and that fragmentation among the peoples inhabiting this region"allowed foreigners to devastate our grace-filled lands and dominate the Central Asian people "".

As for the claims, of course, it is true - Central Asia has long been a place where the interests of the powerful are intermingled. But it seems to me alone that lengthy arguments about aliens are directed exclusively against Russia? After all, only we were able to gain a foothold in this region for a long time - and also to develop it for a long time. But in response, we receive only claims ...

Therefore, in order for the peoples of Central Asia not to be burned in the hellfire of the “cauldron of ethnic contradictions,” I believe that the time has come implement the idea of ​​the nationalists 20-ies of XX century "about the unification of different peoples of Central Asia into a single political unit," the leader of the movement sums up. - In this case, there will be a common regional interest and the Central Asian peoples will become less vulnerable.

"The appeal also notes that the mobilizing factor for unification is the common religion - Islam."

So, taking as an example “the 20 nationalists of the 20th century” - that is, all those Basmachs, Beks and Khans, whom the Red Banner of the Cheka long drove through the dunes, Mr. Sharipov proposes to unite on the basis of Islam. And here I have a question - which one Islam? Against the background of the flowering of all radical movements - from Wahhabis to Salafis - something tells me: not at all traditional.

And now, actually, why I started all this scribbling. Like any normal Russian person, I want my country to be strong. And protected. Both in terms of military and economic. So, the idea of ​​the Eurasian Union is, to a certain extent, positive.

But ... Hand on heart, without any thoughts about xenophobia, I don’t want to live in the same state with people like Sharipov who follow the path of the Baltic states: claims, hatred, demands.

But there are a lot of them, if not most. The parochial nationalism there blooms and smells - even from Gorbachev, who gave him the "green light". And sooner or later, these people will come to power - after all, the Soviet generation, those with whom you can still deal, leaves. And what will happen when the Nazis with a taste of "true" Islam on their lips will stand at the helm?

And here I am again at a dead end. Central Asia is a strategic region for us. Like Ukraine. If you go away from there, others will immediately come - the States (they are already there, but on a temporary basis), China (he is already "squeezing" the land of Tajikistan), Iran. And there is a crowd of armed bearded men in Afghanistan ...

So I want to ask - what do you think, gentlemen-comrades? It turned out, of course, somewhat messy, but as it is.