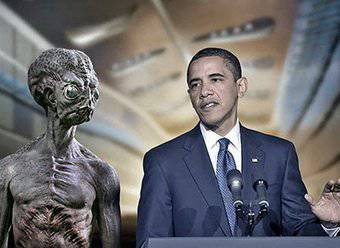 Recently, the former Minister of Defense of Canada made a sensational statement. It turns out that aliens, whose arrival from the stars of humanity has been waiting since time immemorial, have long been here. If people would change their way of life, treat the planet more responsibly and more carefully, stop arranging dumps everywhere, fight, kill and rape, help the poor and send all the military to resign, aliens would bestow fantastic technologies on them.


Paul Hellieur knocked 90. He served as Minister of Defense from 1963 to 1967 years. Not wanting to take the secret of aliens to his grave, he decided to tell it to the world. And since there is only a free press in Russia, Comrade Hellier turned to the Russia Today channel.

He told a huge audience of the TV channel that there are eighty kinds of aliens. “Some of them“ look just like us - they can walk down the street, and you won't notice, ”he said in the SophieCo program.

Hellier described several types of aliens. Among them are "high whites" (they even cooperate with the US Air Force in Nevada). Another group of aliens - "gray shorty." Another one is “Nordic Blondes”, these look like Danes.

Comrade ex-minister did not specify where he got such awareness. However, journalists quickly dug out the sources.

Recently in the press flashed information that Edward Snowden stole about 1,7 million secret documents relating not only to the activities of American intelligence services, but also operations of all types of US forces: ground forces, air forces, navy, marines. According to other data, there were at least two million documents. No, this is not a rally of a journalist chasing a sensation, but a statement by Pentagon experts. This they all more or less accurately counted.

The report of the experts, as usual, was closed, and was intended for the ears and eyes of congressmen. In short, in Russia he would be given at least the “DSP” vulture - “For official use”, and all copies would be numbered and handed over for painting, and in the evenings would be collected back to the secret room. But congressmen in the US are pretty talkative types. For the sake of their own popularity, they constantly have to promote themselves, not the voters will forget about them.

The talkative head of the intelligence committee of the US House of Representatives Mike Rogers made his way to the journalists the very first. He told everything into the microphones, even said that the secret information from the Snowden materials had delighted not only the enemies of the Statue of Liberty, who were ready to carefully study the lists of special services, the generals, officers, intelligence officers, counterintelligence agents and ... But others said for him.

And the media learned that the United States has long been controlled by aliens. Documents Snowden - the best proof of that.

Known for sensational journalistic investigations of Sorch Faal from the site whatdoesitmean.com referring to Snowden, Glenn Greenwald and the FSB indicates that the information is irrefutable evidence that extraterrestrial intelligence is the driving force of US domestic and foreign policy from at least 1945 onwards.

A special FSB report on Snowden, built on his documents, noted that back in December 2012, Edward had contacted the distinguished columnist and blogger Glenn Greenwald by email. It was about an incredible topic - about some "other things" that Comrade Greenwald would "be interested in".

According to Snowden himself, the FSB report is devoted, among other things, to secret information that the United States is actually governed by two governments: one is elected and the other is shadow.

The confirmation of this information has now been received: Hellier (mentioned above) not only gained access to all of Snowden’s documents transferred to the Russian special services, but also stated that they correspond to reality. By the way, the same Hellier recognized that the aliens "have visited our planet for thousands of years."

“High whites” play a special role in the alien groups. This extraterrestrial civilization not only collaborates with the US Air Force in the state of Nevada, but also played a significant role in the geopolitics of the mid-20th century.

According to whatdoesitmean.com, the following is the “explosive revelation” in the FSB report. Snowden's documents confirmed that the “tall whites” are the same alien race that stands behind the stunning rise of Nazi Germany in the 1930s.

Here is an example from the report of the FSB.

It was with “alien assistance” that Nazi Germany, which possessed 1930 submarines of the entire 57-s, during the four years of the Second World War managed to build 1163 technologically advanced submarines in its shipyards and even exploit them!

And here is another example.

According to Snowden's documents, in 1954, the “high whites” came into contact with US President Dwight Eisenhower. At that time, this group was created the "secret mode" that today controls the United States.

The most disturbing thing, Sorcha Faal writes, is that the report of the FSB warns: on the agenda of the “high whites” is the question of implementing such a “secret regime” of the US government that would allow creating a global electronic system, designed to hide true information about the presence of aliens on Earth. After the introduction of such a system, the final stage of the plan of an extraterrestrial civilization will come, namely, the complete assimilation of earthlings and world domination of the “high” ones.

Russian intelligence experts point out that the catastrophic power struggle underway in Washington can be judged without error. On the one hand - Obama, on the other - "secret mode". Who will be stronger? ..

Observed and translated by Oleg Chuvakin
- especially for topwar.ru
Ctrl Enter
Noticed oshЫbku Highlight text and press. Ctrl + Enter
We are
The attacks continue to claim the lives of the Syrians, and the Belt of the Virgin Mary returned to HomsResults of the week. “In our cooperative, the board is always agreed”
Military Reviewin Yandex News
Military Reviewin Google News
254 comments
Information
Dear reader, to leave comments on the publication, you must sign in.