The global crisis and the “yellow threat” led to the arms race of the countries of the Asia-Pacific Region. Part of 2


The territory, population (fourth place in the world - about 250 million people), the level of economic and political development make Indonesia one of the key countries in the Asia-Pacific region. The foreign policy line allowed Jakarta to strengthen its position in the international arena, raise its status in the region and in the Islamic world. Indonesia is a secular state, while the absolute majority of the population - more than 88% - practice Islam, which makes the country the largest Muslim state in the world.

When considering the war effort of Jakarta, it must be borne in mind that the Indonesian leadership seeks to have such armed forces that can preserve the territorial integrity of the state located on the 17500 large and small islands of the Malacca archipelago. Sea expanses, the broad length of the border, colorful ethnic composition (in the country lives around 300 peoples), the global trend towards strengthening the Islamist underground become the main sources of problems in Indonesia.

For a long time, the main problem in Indonesia was East Timor. With the support of the United States and Australia, the Indonesian army occupied East Timor in 1975. From that moment until the 2002, the confrontation between the Indonesian government and supporters of the independence of the former Portuguese colony lasted. Only in 2002, East Timor regained its independence.

In 2005, the problem of Aceh province was solved. There has been a civil war for three decades. The Free Aceh movement advocated the independence of this area. Separatists, relying on historical the heritage in the form of the Aceh Sultanate (a Muslim sultanate that has been prominent in the history of the region since the 1904th century and conquered by the Netherlands in XNUMX), the special Islamic traditions of the region, which since the XNUMXth century has become the center of the spread of Islam in this region, opposed the secular course of Muhammad Suharto. The separatists were unhappy with the centralization policies pursued by Jakarta. Moreover, they wanted to control the local economy, refusing to “feed the center” (the province has rich gas and oil fields). After a long confrontation, the conflict was resolved. The province received the status of “special autonomy”, local authorities got the opportunity to control the region’s natural resources (natural gas, oil, wood and coffee). The government withdrew troops and police forces, and released the rebels in Indonesian prisons. Separatists controlled by international observers weapon and abandoned the idea of ​​complete province independence.

Another center of separatism exists in the territory of Western New Guinea (Irian-Jaya). Indonesia annexed this territory in 1969 year. In 2003, Jakarta decided to divide the territory of Irian Jaya into three provinces, which caused protests of the local population. The movement for free Papua, created in 1965, fights for independence from Indonesia, restricts the influx of non-indigenous population and the development of the economy that violates the life of Aboriginal people without the consent of local residents.

In addition, the government faces inter-ethnic and inter-religious problems. In 2000, there was a sharp rise in radical Islamism. A number of Islamist movements like Jemaah Islamia (“Islamic Society”) set as its goal the creation of a single “Islamic state” in Southeast Asia, which will unite a significant part of the region. The Indonesian authorities were able to bring down the first wave of Islamism, driving it into the deep underground, but the situation remains quite tense. Significantly aggravated and the criminal situation in Indonesia. The number of pirate attacks is constantly increasing. The most dangerous area is the Strait of Malacca and its adjacent waters.

In recent years, Indonesia’s strategic ties with Australia continue to strengthen. Indonesia for a long time was viewed by Australia as the main potential adversary. However, taking into account the great importance of the lines of sea and air communications passing through the Malay Archipelago, its economic and military-strategic importance, now Indonesia is one of the key partners for Australia. In 2012, an agreement on defense cooperation was concluded between the two powers. Australia and Indonesia are cooperating in the fight against international terrorism, piracy, exchanging intelligence, etc. Jakarta and Canberra take into account the fact that the growth of China’s influence upsets the previous balance of power. The two Pacific powers are strengthening military cooperation and creating the basis for joint defense-industrial projects. In 2012, Australia delivered the X-NUMX transporter C-4H Hercules from the Australian Air Force to Indonesia for free. Indonesia paid only for their restoration and repair. In 130, Australia sold 2013 used C-5H military transport aircraft to Indonesia.

Indonesia's military budget for 2013 year amounted to 8,3 billion dollars. Compared with the previous period, there is a significant increase in military spending (in 2004 year - 1,3 billion dollars, 2010 year - 4,7 billion dollars). This volume is about 0,8% of GDP, that is, there is an opportunity to significantly increase military spending (2% of GDP is considered to be the average level). Indonesia is one of the least militarized countries in the world. However, in recent years, Indonesia has placed a number of large contracts for the purchase of air, sea and land weapons. The state plans to increase the military budget by 20% annually. By 2015, it will reach 10 billion dollars. In addition, Indonesia’s economy is the largest in Southeast Asia. According to analysts, while maintaining growth rates at the level of 6-6,8% per year by 2030, the Indonesian economy can take the 6-8 place in the world (in the 2012, took the 18 place).

In general, despite a number of statements by the Indonesian military who talk about a large-scale rearmament of the Armed Forces, so far the purchase of weapons, especially against the background of such giants as India, is not impressive. At the same time, the process of increasing naval and air weapons is visible to the naked eye. In 2013, Indonesia received the 6 Su-30MK2 (2011 contract of the year). Now Indonesia has 16 Su-27 and Su-30. In the future, new supplies of Russian heavy fighters are possible. In 2011, Indonesia bought 16 training aircraft T-50 from South Korea. Most of the aircraft have already been delivered. In addition, Indonesia has become a partner of South Korea in the program to create a promising 5 generation fighter, the KF-X. Jakarta must pay the 20% program. Seoul at the end of 2013, announced the revitalization of the project to create a national fighter. 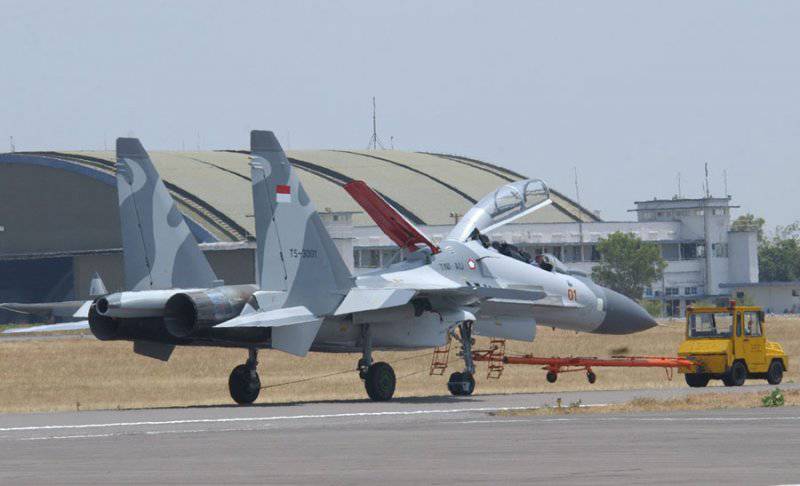 It can be said that South Korea is Indonesia’s second key partner in the APR. Tens of thousands of Koreans live in Indonesia, most of whom are engaged in business. Virtually no such area of ​​the economy of Indonesia, where representatives of South Korea would not be involved.

In 2011, the Indonesian Ministry of Defense signed a contract with Embraer, a Brazilian company, to supply 8 combat training aircraft to EMB-314 Super Tucano. In 2012, the Indonesian Air Force received the first 4 aircraft. In the same year, Indonesia signed a contract for the supply of a second squadron of 8 UBS EMB-314. The aircraft will serve not only training aircraft, but also light attack aircraft, reconnaissance aircraft in the fight against illegal armed groups. In 2014, Indonesia plans to purchase the F-24 fighter 16 from the USA. In 2012, Indonesia entered into a contract with the European aircraft manufacturing concern Airbus for the supply of X-NUMX military transport aircraft C-9. 295 attack helicopters Apache are also expected. In addition, Indonesia wants under license to collect another batch of attack helicopters AH-8 "Apache". In the spring of 64, Indonesia received six Bell 2013EP multi-purpose helicopters. The launch of assembly lines for Bell helicopters is expected, which will increase the helicopter component of the Indonesian aircraft.

Quite a good pace is the development of the Navy. The most important program is the strengthening of the underwater fleet... In 2011, the Indonesian Ministry of Defense bought three submarines from the South Korean shipbuilding company Daewoo Shipbuilding & Marine Engineering (DSME). The deal amounted to $ 1,1 billion. Apparently, there will be new orders. The Ministry of Defense wants to have 2024 new submarines in the Navy by 12. Taking into account the island position of Indonesia and the strengthening of the submarine fleets of Australia, Malaysia, Vietnam and China, such a decision looks quite logical. At the same time, it is obvious that in the APR there is a race of naval, including submarine, arms.

In 2011-2012. The Ministry of Defense of Indonesia bought two frigates of the Sigma 10514 project from Holland. The first ship will be handed over to the Indonesian Navy in 2016. The construction of ships is carried out using modular technology in Western Europe with the final docking of blocks in Indonesia. In 2013, Indonesia bought various ship systems from France, including sonar, radar and communications. They will be installed on frigates of the Sigma project and submarines of the Type 209 project. In total, the Indonesian military plans to receive up to 20 frigates of the Sigma type. In the summer of 2013, Jakarta bought three corvettes built in the UK for the Royal Navy of Brunei. The Sultanate of Brunei abandoned these ships. In addition, Indonesia is independently building small, inconspicuous X3K rocket trimarans with carbon fiber hulls. Lundin Industry Invest received an order for 4 ships. The contract for the construction of the lead ship was signed in 2010. The trimarans will be armed with four anti-ship missiles and the 76 mm OTO Melara Super Rapid universal automatic artillery system. PT Pal Company (Surabaya) is constructing a Makassar-type landing helicopter docking ship for the Navy with a total displacement of more than 11 thousand tons. Landing capacity of the ship: 500 people, 13 tanks2 landing boats. Aviation group - 2 helicopters. Indonesia already has two such ships. The fleet received them in 2007. They were built at the shipyard of the South Korean company “Tesun Shipbuilding” (Busan). In total, Jakarta plans to have 4 Makassar-type dock ships.

Airborne helicopter ships-docks such as "Makassar."

In 2012, Indonesia entered into an agreement with China for the supply of C-705 anti-ship missiles. Jakarta plans to equip the marine corps with Russian BMP-3F. Under the 2007 contract of the year, Indonesia received 2010 machines in the 17 year. In 2012, the Indonesian Marine Corps ordered a batch of 37 BMP-3F. In 2013, the Indonesian Ministry of Defense signed a contract with the Rheinmetall Group to purchase 103 Leopard 2A4, 43 tracked infantry fighting vehicles Marder 1A3. Delivery Times 2014-2016 The first tanks and infantry fighting vehicles were delivered in September 2013. Prior to that, Indonesia was not armed with heavy tanks. In 2012, the Ministry of Defense ordered thirty-seven 155-mm self-propelled Caesar self-propelled guns for the ground forces.

A strong army is necessary for Indonesia in the first place to maintain internal stability. At any moment, an internal threat may arise: from the emergence of new foci of separatism to a new wave of the Islamist movement or an outsider-inspired virus of the “struggle for democracy”. The army is a powerful factor of stability in a country that is extremely diverse in cultural, ethnic and religious terms. Indonesia has already lost East Timor, so Jakarta is extremely sensitive to any threats of separatism. The factor of external threat is also taken into account. So, more and more attention is being given to the fast-growing military power of China. The rapid development of the economy, industrial and technological growth allow Indonesia to pay more attention to the modernization of the armed forces. 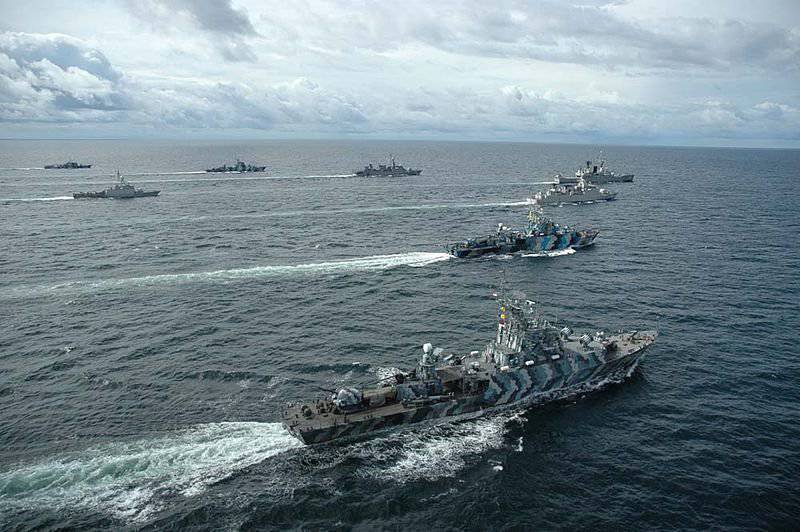