January 15 2014
24
The first battles of the Second World War allowed the German military to test their strategies in practice and adjust them in accordance with the results of real battles. One of the results of the Polish campaign was the requirement to create a self-propelled artillery installation with a caliber of at least 100 mm. It was assumed that such an assault weapon would be able to effectively destroy enemy fortifications. The German command was already preparing to attack France, and an ACS with powerful weapons could be useful in overcoming the fortifications of the Maginot Line. 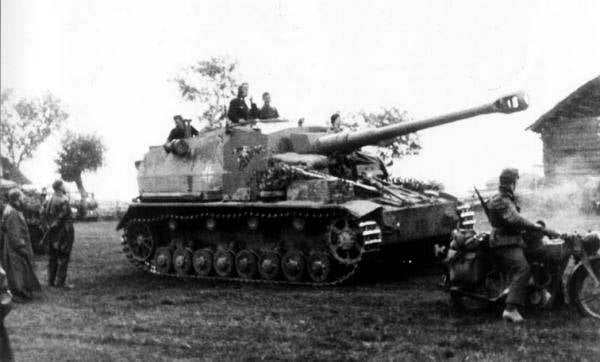 Without losing time, already in September 1939, the German military ordered the Krupp company to develop and build a self-propelled artillery installation that meets the existing requirements. Within a few weeks after signing the contract for the design of the ACS, the military and the project implementers decided on its main weapons. To effectively destroy various types of fortifications, she had to use an 105-mm 10.5 cannon Kanone 18 L / 52 (K18 L / 52) cannon. In accordance with the classification of military equipment adopted at that time, the self-propelled gun was designated 10.5 cm K gepanzerte Schartenbrecher.

In the course of developing a new self-propelled gun, Krupp engineers and related enterprises were constantly harassed by various troubles. Because of this, the creation of the project lasted about a year. The construction of prototypes of self-propelled guns 10.5 cm K gepanzerte Schartenbrecher began only in the last months of 1940. By this time, hostilities in France had ended, because of which the military had to look for a promising self-propelled gun a new application. Now it was proposed to use it not so much to fight against fortifications as to defeat enemy armored vehicles and manpower. The characteristics of the 105-mm Kanone 18 L / 52 gun were sufficient to defeat all existing and promising tanks Of Europe. Together with the new purpose, the self-propelled gun received a new name: 10.5 cm K gepanzerte Selbstfahrlafette IV.

The basis of the new self-propelled gun was the medium tank PzKpfw IV Ausf.A. Tracked chassis with engine Maybach HL66P power 180 hp should provide 22-ton SAU mobility, sufficient for equipment of this class. According to calculations, on a highway, the 10.5 cm K gepanzerte Selbstfahrlafette IV self-propelled gun could reach speeds up to 27 km / h. In the light of the tactical tasks of self-propelled guns designed to combat enemy tanks, such characteristics were sufficient. Chassis base tank has not changed. 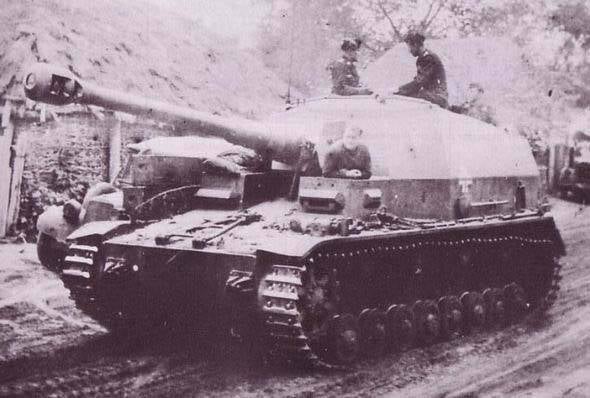 The hull of the base tank remained the same: it had a frontal sheet with a thickness of 50 mm and 20 mm boards. Instead of a tank tower, a promising self-propelled gun received a large armored felling, which occupied the entire middle and aft parts of the hull. It was proposed to assemble the cabin from armor plates with a thickness from 50 mm (forehead) to 10 mm (feed). The roof of the cabin was missing. The wheelhouse housed four crew members out of five.

The breech of the K18 L / 52 gun was quite large and did not allow targeting in wide sectors. Therefore, horizontally, the gun was induced only within 8 ° to the left and to the right from the axis of the vehicle, vertically - from -10 ° to + 10 °. At the sides of the logging stationed laying of ammunition. ACS 10.5 cm K gepanzerte Selbstfahrlafette IV could carry up to 26 shells caliber 105 mm. The weapon used was powerful for its time. From a distance of two kilometers, the Kanone 18 L / 52 cannon punched over 100 mm of armor. Thus, the new self-propelled gun could destroy the tanks of the late thirties and early forties from a safe distance. Its own booking, combined with firing characteristics, reliably protected enemy anti-tank artillery from fire.

Longer effective firing range has reduced the defensive armament of the new ACS. There were three MP-40 submachine guns with ammunition in the fighting compartment. 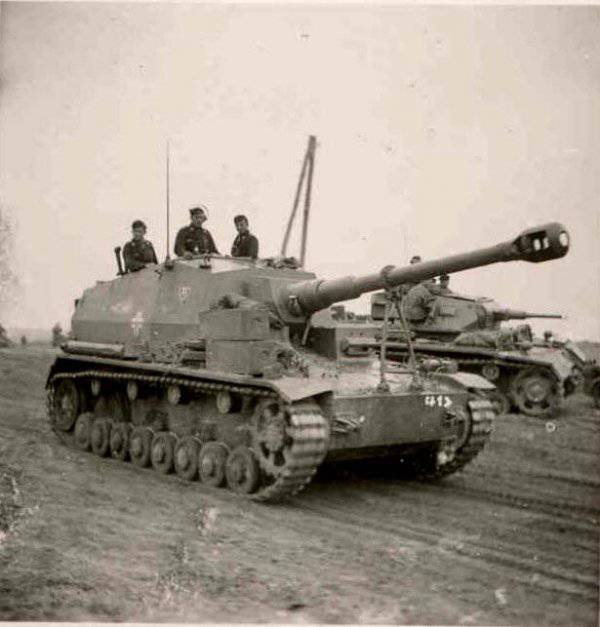 During the design of the self-propelled gun 10.5 cm K gepanzerte Selbstfahrlafette IV received the unofficial nickname Dicker Max ("Thick Max"). The “overweight” and characteristics of the 105-mm guns led to a number of specific consequences. In the later stages of the design, it became clear that the self-propelled artillery installation needed a new suspension of the road wheels. In order to maintain permeability at the existing level, but at the same time to increase the survivability of the units, it was necessary to develop a new undercarriage based on the corresponding units of the PzKpfw III and PzKpfw IV tanks. The reinforced design withstood the return of a powerful weapon, but was not without flaws.

Two prototypes of the 10.5 ACS cm K gepanzerte Selbstfahrlafette IV were completed in January 1941. The first tests demonstrated both high firepower and flaws. Most of all complaints were tracked chassis. Even after improvement, it did not provide the required characteristics. In the future, for self-propelled Dicker Max was supposed to create a new design of tracked propulsion.

Despite the problems with the undercarriage, the new self-propelled artillery mount generally suited the customer. Without waiting for the end of the tests, the Wehrmacht command and the management of the Krupp company discussed the start date for the construction of serial self-propelled guns. In the spring of 41, it was believed that such combat vehicles would go into series at the very beginning of next year. By that time, it was planned to complete the development of the ACS and eliminate all problems, including the creation of a new undercarriage. 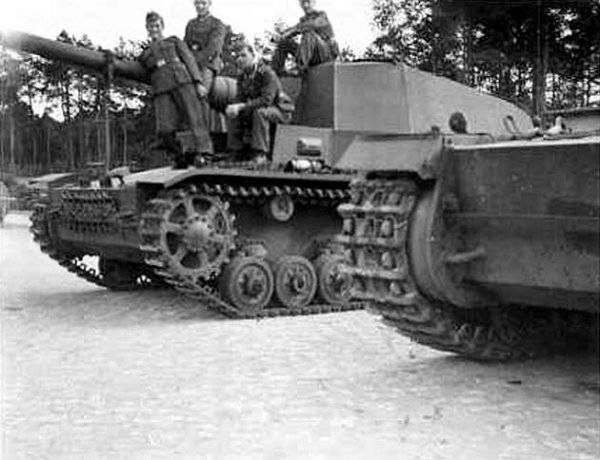 In mid-June 41-th two prototypes ACS 10.5 cm K gepanzerte Selbstfahrlafette IV were sent to the anti-battalion Panzerjager Abteilung 521 for trial operation. During the first few fights, "Fat Max" showed its best side: caliber gun 105 mm for the destruction of Soviet tanks and allowed to deal effectively with various types of fortifications. Due to their high firepower, two new self-propelled guns have earned a good military attitude.

It should be noted that during the trial operation of self-propelled Dicker Max self-propelled guns managed to show themselves not only from the positive but also from the negative side. First of all, the claims caused a weak engine. Combat vehicles with a 150-strong engine could not move in the same order with the tanks. In addition, there were several cases where the ACS of the new model risked falling behind other vehicles on the march. When driving on rough terrain self-propelled gun could get stuck, not being able to independently get out of the mud.

The powerful gun was equipped with a muzzle brake, which adversely affected the convenience of direct fire. Gases escaping from the holes of the brake, raised a huge cloud of dust, which is why pointing the gun to a new target became a very difficult task. In some cases, for its solution it was necessary to attract additional gunners, who were located away from the ACS. Finally, just two 10.5 cm K gepanzerte Selbstfahrlafette IV combat vehicles were not enough for even one anti-tank battalion. The need for the German army in such a technique was estimated at least a few hundred units.

In the middle of summer 1941, the German military lost one of two prototypes of a promising self-propelled gun. As a result of the accident, a fire occurred in the fighting compartment, which provoked an explosion of ammunition. Repair the destroyed car was considered impractical. In a number of sources it is mentioned that the wreckage of this “Fat Max” soon became the trophy of the Soviet military and scientists. According to other sources, Soviet gunners hit the self-propelled gun, and its fragments soon became a trophy. Regardless of the specific reasons for the loss of one of the machines, in the future, only one prototype was in trial operation. 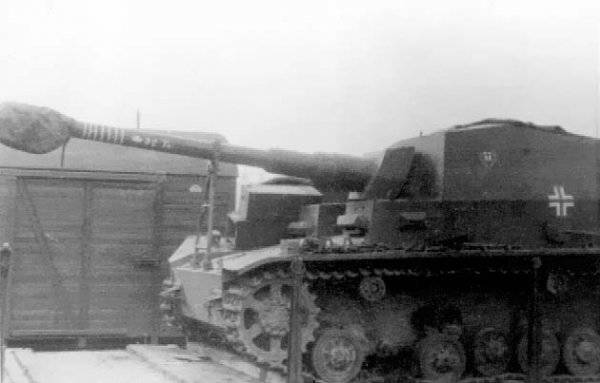 The second self-propelled gun remained in service until the fall of 41. During this time she received several minor damage, but, nevertheless, was used in battles. In October of the same year, the remaining prototype ACS Dicker Max was sent to the Krupp factory, where it was repaired and upgraded. During the repair, the self-propelled gun received a Maybach HL120TRM engine with 300 horsepower. and a new transmission. The use of the new power plant has increased the maximum speed on the highway to 40 km / h. In addition, the nomenclature of defensive weapons has expanded. The latest machine "Fat Max" was equipped with a MG34 machine gun with 600 ammunition. Interestingly, the regular place of the machine gun was one of the boxes inside the fighting compartment, and no systems for fastening it to the wheelhouse were envisaged.

The last 10.5 cm K gepanzerte Selbstfahrlafette IV self-propelled gun returned to the front by the summer of 1942. Its trial operation continued until the end of the year. At the same time, there were active disputes in Berlin concerning the start of mass production of such equipment. In support of its start talking high firepower 105-mm guns, the ability to fight the Soviet tanks T-34-1 and HF from a safe distance, and the relative simplicity of the production. On the other hand, in some situations firepower "Tolstoy Max" was redundant, the firm "Krupp" plants were loaded production of other vehicles, and troops were in need of a large number of self-propelled howitzers, and not in the tank destroyer.

Ultimately, numerous cons ACS 10.5 cm K gepanzerte Selbstfahrlafette IV, including the absence of any particular success in finishing problematic units, outweigh the benefits. At the end of 1942, the talk about the possible start of serial production of a promising SPG completely stopped. During the project, only two prototypes were built, one of which was lost in the battles. The second at the end of 42 was sent back to the enterprise that built it, after which its traces are lost. It was probably dismantled or destroyed during the bombing or the battle for the plant.

The 10.5 cm K gepanzerte Selbstfahrlafette IV self-propelled artillery mount was an interesting but ambiguous combat vehicle. A powerful and effective weapon was installed on a relatively weak chassis with a low-powered engine, which led to a number of problems with mobility and running gear life. In the end, these shortcomings were partially corrected, but their practical results did not give any practical results. Were built only two instances of self-propelled guns, which, of course, could not influence the course of the war. 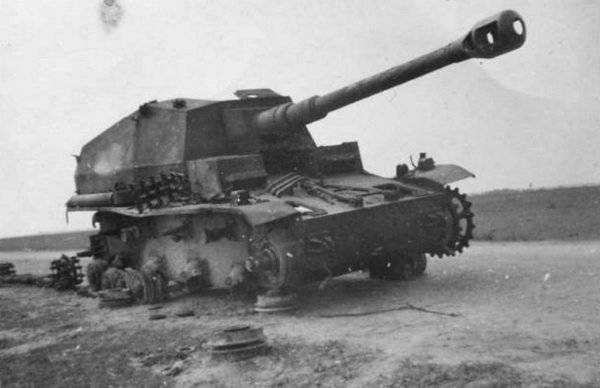 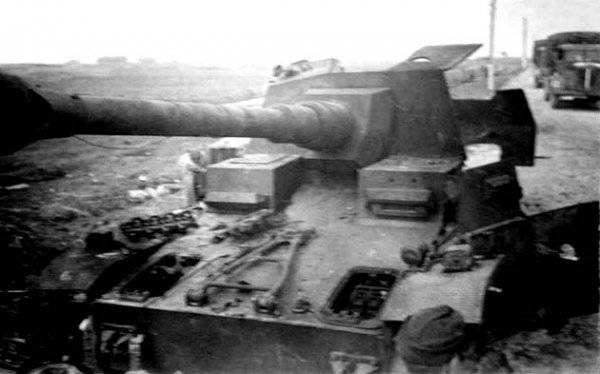 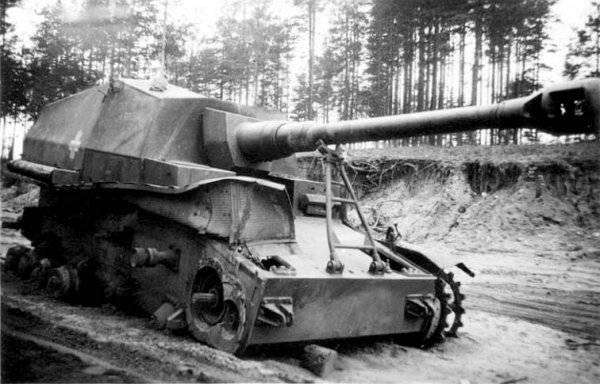