Hot frontier. Armed conflict between the border guards of Kyrgyzstan and Tajikistan - the CSTO member states

January 15 2014
58
11 January 2014 of the year. Kyrgyz-Tajik border. Not far from the Kyrgyz village of Ak-Sai and the Tajik Vorukh, a battle broke out between border guards of neighboring states. As a result of the skirmish that lasted for about an hour, according to the latest data, 11 people were received, among whom there are also severely injured people. The wounded were sent to local medical facilities. 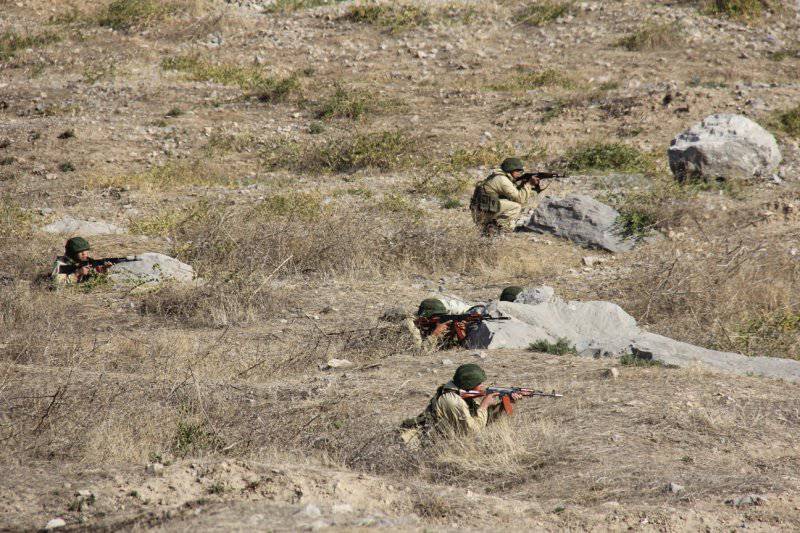 The reason for the outbreak of the conflict is that Kyrgyz road services attempted to start building the Koktash-Tamdyk road, which was supposed to pass through the above-mentioned Ak-Sai. In this regard, you can ask the question: Is the construction of a civilian facility by a neighboring state can provoke the real fighting with all the consequences? In the Kyrgyz-Tajik case may. The fact is that the same road under the project must pass through the territories, the administrative status of which has not yet been determined. These are the plots between the enclaves of Kyrgyzstan - lands surrounded by the territory of Tajikistan, and the enclaves of Tajikistan - lands surrounded by the territory of Kyrgyzstan. Territorial units are so intricately located on the map of Central Asia that today it is extremely difficult to understand which state exactly this or that area belongs to. Immediately after the collapse of the USSR, these border areas turned into an apple of discord between Tajikistan and Kyrgyzstan. It should also be noted that from almost 1000 kilometers of the Kyrgyz-Tajik border, delimitation (the establishment of a border line) concerns only 570-ti.

The Tajik border guards, considering that the Kyrgyz services of the motorway entered the territory of Tajikistan (Vorukh enclave), decided to show those who is the owner. Official Dushanbe argues that the Kyrgyz were warned “diplomatically” - without shots and gunfire, and that it was the Kyrgyz border guards who responded to the demands to stop construction by fire from firearms. weapons. Official Bishkek has a diametrically opposite version of what happened. According to this version, the Tajik border guards, without any warning, opened fire on the Kyrgyz "colleagues", and using not only automatic weapons for this, but mortars as well. The Kirghiz counted six mortar craters and one unexploded mine.

Note that similar incidents for this section of the Kyrgyz-Tajik border (which by and large is very conditional over more than 400 kilometers) are not uncommon. The last bloody incident occurred here last spring. Then the road that the Kyrgyz workers can’t finish building was an apple of contention. At that time, the conflict was due to the fact that residents of the Tajik enclave vigorously opposed the Kyrgyz road running through it. They connected their fears with the fact that if today the road from one Kyrgyz village to another goes through the enclave territory, then tomorrow Bishkek may officially “stake out” the right to this site. It came to real hand-to-hand combat, several people even became hostages. The situation then managed to resolve the intervention of the central authorities of Tajikistan and Kyrgyzstan.

This time, too, there was no such intervention. After the exchange of diplomatic notes in which Bishkek lays the blame for what happened on Dushanbe and Dushanbe - on Bishkek, and after the ambassadors' comments, it was first decided to completely close the border by pulling additional border patrols there. Then the emotions subsided somewhat, and Bishkek, like Dushanbe, decided to withdraw additional border reinforcement from the scene of the conflict. However, it should be noted here that if the military situation of the confrontation is currently exhausted, then in the diplomatic sense a special negotiation advance is imperceptible. The Tajik states that Bishkek should take the blame for what happened, the Kyrgyz authorities say that the fault lies entirely on the Tajik side. Bishkek does not intend to abandon the construction of the road, and Dushanbe does not intend to enter into a dialogue to resolve such construction. At the moment, construction work for obvious reasons, suspended.

At the moment, it is known that agreements have been reached between the authorities of neighboring states in Batken, Kyrgyzstan. In particular, an agreement was born that, with 14 in January, patrols from law enforcement officers from both Kyrgyzstan and Tajikistan will appear on the disputed parts of the border. The main feature of these patrols is that they are joint. In addition, agreements were reached on opening several checkpoints at the border to ensure the movement of civilians, and the parties were able to agree on joint measures to counter the occurrence of such conflicts in the future. The Tajik negotiation delegation in Batken was led by the commander of the border troops of Tajikistan, General Rahmonali, and the deputy minister of internal affairs of the republic, General Radjabov. The heads of the Kyrgyz delegation were Deputy Interior Minister General Asanov and Deputy Chairman of the Frontier Service of Kyrgyzstan, Colonel Mambetaliev.

It would seem that this is an ordinary short-term regional conflict, to which one should not pay much attention. In fact, any conflict, and even more so armed, and even with the active counteraction of each other by the border guards of the neighboring states of the CSTO on the territory of Central Asia, is a very negative phenomenon. If the military personnel of the countries of the Collective Security Treaty Organization can already afford to shoot at each other with automatic firearms and mortars, guided by rather artificial reasons, it’s time to ask the question: are they ready to support each other if necessary? countering external aggression (if such, God forbid, happen)?

In this regard, it should be noted that the leadership of both the republics that have unleashed the conflict and the leadership of the CSTO should immediately carry out, let's say, work on the mistakes, and draw the right conclusions from what happened.

Ctrl Enter
Noticed oshЫbku Highlight text and press. Ctrl + Enter
We are
The southern frontier is under threat. Will Central Asia protect itself?Why Uzbeks and Tajiks do not take the world
Military Reviewin Yandex News
Military Reviewin Google News
58 comments
Information
Dear reader, to leave comments on the publication, you must sign in.