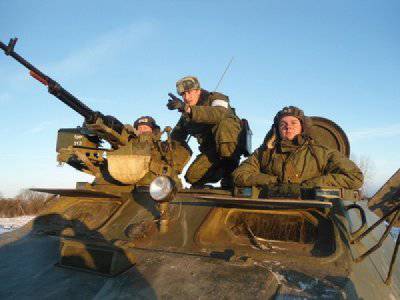 A separate motorized rifle brigade (mountain) was formed in June 2006 of the year, initially located in Botlikh (Dagestan), where in August Shamil Basayev’s gangs were stopped. In the summer of 1999, it was relocated to the territory of the Republic of Adygea. The commander of the brigade, Colonel Igor Timofeev, spoke about his current affairs and concerns of the “Red Star” about how the special forces' mountain specialization (as the compound is called) proceeded in a new place.

Colonel Igor Timofeev was born in Novosibirsk in 1968 year. After the end of the Ryazan VVDKU consistently went through all the stages of official growth from the platoon commander to the battalion commander in the airborne units. After graduating from the Combined Arms Academy of the Ministry of Defense of the Russian Federation, he commanded a regiment, an airborne assault brigade. He performed combat missions in “hot spots”: in Nagorno-Karabakh, in Armenia and Azerbaijan, in Abkhazia. A participant of the 1 and 2 of the Chechen campaigns. Awarded two Orders of Courage and the Order of Merit for the Fatherland (with swords), IV degree. In 2012, he was appointed commander of a separate motorized rifle brigade (mountain).

- Igor Borisovich, the unit that you command is one of the youngest in our Armed Forces. However, in the assets of your team a lot of glorious things ...

- Indeed, the connection is young, in the summer of 2013, it celebrated its seven-year anniversary. The combat banner of the unit was handed over to the brigade at the former point of its deployment in Botlikh in December 2007 by general Alexander Baranov, at that time commander of the troops of the North Caucasus Military District. In February, President of the Russian Federation Vladimir Putin visited 2008 of the year. He was interested in how the arrangement of the new compound, the construction of the military camp, and was satisfied with what he saw.

The newly created compound received the most modern educational and material base. It is not surprising that the team immediately after completing its recruitment was already able to perform the most difficult tasks at the highest peaks. So, in the summer of 2007 of the year (in accordance with the order of the Supreme Commander of the Armed Forces of the Russian Federation Vladimir Putin) before the 1 motorized rifle company (mountain) a separate motorized rifle battalion, reinforced by a mortar platoon, the task was set: to make the ascent to Elbrus.

Preparation for the ascent was carried out on an individual program under the guidance of instructors of the Federation of Mountaineering of the Russian Federation. Over the course of the month, training was conducted at the Daryal training range and in the Karmadon Gorge, where the soldiers learned to live in the mountains. And in the middle of August, 2007, the 1-i motorized rifle company, for the first time in stories The Armed Forces of the Russian Federation successfully completed a unique combat training task, having climbed the highest peak of the North Caucasus! Simultaneously with this climb at a height above 5.000 meters above sea level, this unit took part in the exercises with live firing. After the exercise, our part was informally called the "mountain special forces"!

Of course, the fact that the mountain compound already in its formation could show such high samples of combat and special training for its intended purpose is the merit of the first kombriga Vladimir Sokolov, his deputy, Colonel Rudolf Kalgashkin, the chief of staff of the brigade Dmitry Polyansky and other officers of the first composition brigade.

The units of the compound also took part in the military operation to force Georgia to peace in August 2008. Yes, our brigade is young, but it has undergone excellent hardening in the course of systematic combat training in the conditions of the mountains and in the performance of suddenly arising service-combat tasks.

Since the summer of 2010, Colonel Alexander Zybkin was appointed as its commander. Here, on the shoulders of Alexander Leonidovich, lay all the concerns for the implementation of the redeployment of the brigade from Botlikh to the capital of Adygea, Maikop.

- Relocation for any connection is a serious challenge ...

- Our military brother is no stranger to nomadic life. In the summer of 2011, the brigade redeployed to Maikop, where it was re-formed into a separate motorized rifle brigade (mountain) and transferred to the combined army of the Southern Military District. In the shortest possible time, the subunits of the brigade carried out all the arrangements for arranging the personnel in the winter quarters in the Maykop garrison, in deploying military equipment and property, and proceeded to planned combat training.

I would like to note that the connection was not relocated to an empty place. As you know, the famous 131-I separate motorized rifle brigade, which showed samples of courage and heroism during the battles in Grozny during the first Chechen campaign, was located in Maykop. In 2009, the brigade was redeployed to Abkhazia, where, on its basis, the 7-i Krasnodar Red Banner, the Kutuzov Order and the Red Star military base were formed in Gudauta. And in Maikop, an artillery brigade was stationed at the location of the former 131 brigade, which was later relocated to Ingushetia. So, after the transfer from Botlikh to Maikop, our team inherited from its predecessors the inhabited military town on the outskirts of Maikop with 2-floor barracks, service buildings, warehouse premises and a united park, with a rifle-artillery range, a circuit. We also have our own training ground - the Maikop training center with an area of ​​230 ha, which is adapted for company tactical exercises.

The leadership of the republic greeted with great warmth the representatives of the command of our unit, who had arrived at the new place of deployment. During a working meeting with the former commander of a separate motorized rifle brigade, Colonel Alexander Zybkin, the head of Adygea Aslan Tkhakushinov said: “In Adygea, they always had a warm attitude towards the military profession. The long-term stay of military brigades on the territory of the republic — a separate motorized rifle, then artillery — strengthened the foundations of military traditions and the patriotic education of the population. ”

The head of Adygea stressed that the leadership of the republic always helped and intends to help the servicemen and their families in solving social issues in the future.

- When in July 2012 of the year in Krymsk there was a destructive flood, then one of the parts of the Ministry of Defense, the first to arrive in the emergency zone, was your brigade ...

- Indeed, having arrived on the night of 15 on 16 July in Krymsk, the personnel of our brigade immediately began to assist the local population. During those critical days, more than 700 servicemen searched for missing people, dismantled debris, participated in cleaning households and courtyards, loading and taking out garbage. During the rescue work, I myself had to organize interaction with the leadership of the administration of the Yeisk district of the city of Krymsk, where our servicemen had a defined scope of work. The personnel under the leadership of the commanders of the divisions Majors A.S. Bugria, M.V. Cherkas, captain A.L. Shnyrkova and other officers acted selflessly, with full dedication. Over the course of several days, 350 households were cleared, 8 km of streets were put in order, more than 1.500 tons of various garbage were removed.

The involvement of military personnel in the performance of the suddenly arisen task did not affect the quality of the implementation of the 2012 combat training plan of the year, which was fully completed. The personnel of the brigade showed high combat and special training, participating in the Kavkaz-2012 SKSHU.

- With what results in combat training did your 2013 team finish the school year?

- The combat training plan in 2013 was completed by the compound. On landfills held 52 shooting weapons and 18 artillery firing. In the winter and summer periods, training sessions were held with representatives of all specialties (one in each period) - with gunners and mortar gunners, snipers and drivers, grenade launchers and scouts, demining groups, RCBZ. To this end, we fully use our landfill. In addition, the intelligence units final stage of the collections are held in the training centers of the Southern Military District - Daryal (in North Ossetia) and Terskol (in Kabardino-Balkaria). Artillery units carry out their training during the camp artillery gathering association at a training center in the village Molkino Krasnodar Territory. There in Molkino we usually conduct company and battalion tactical exercises. Last year, 3 RTU and one BTU were held. During the past school year, the 45 grade skills of the officers and 32 percent of the contract military personnel were raised. For the better among the officers, I note the commander of the 1 battalion, Lieutenant Colonel Roman Shkrob, and the Chief of Staff of the artillery division, Major Vitaly Bobyr.