Disasters are not private. Why Fukushima still poisons the world 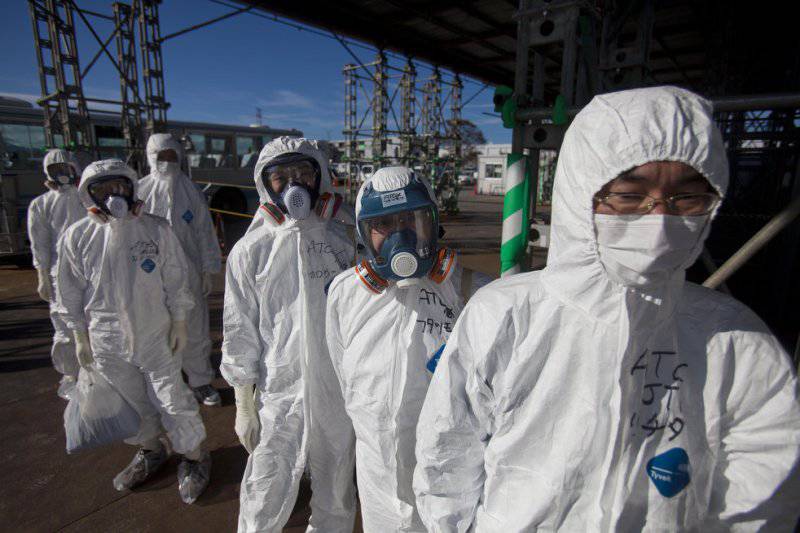 Rospotrebnadzor began 2014 year with blocking on the border of a whole batch of radioactive Japanese cars. Detained 132 foreign cars and 33 parts of them. This can be considered a bad sign, because for the whole of last year, the Far Eastern border guards caught the order of 80 radioactive machines and 30 parts of spare parts, plus exotic things like a sludge pumping machine or an asphalt paver.


In principle, история as old as the world - after every major flood in Europe, the left-hand drive drowned, washed to shine, but still unsuitable for drowned vehicles, traditionally tried to leak into the Russian market, and after the tsunami in Japan, the same thing started with the right-hand drive. However, if a car clogged with sludge just gets on the track, then the radioactive kill the owner, his family, and neighbors, here the stakes are much higher. At the same time, the growth in the supply of firing iron to Russia is not a result of the activities of some malicious Japanese business, which for some reason now decided to send us more poisoned cars. It is not business that grows, the source of the problem grows.

In October, "However," covered a small fraction of the problems that the Japanese themselves experience from the neighborhood with the destroyed Fukushima-1 nuclear power plant. In December, a new message arrived - in less than a month, the level of beta radiation in technical wells on the station’s territory more than doubled and reached a new record in 1,9 million becquerels per liter of liquid. Calling it water is no longer turning the tongue. Moreover, TEPCO Corporation experts found radionuclides where previously the samples were clean - in groundwater at a depth of 25 meters under the station. In total, a liter of liquid had 95,7 Becquerels.

All this is happening because the Fukushima-1 NPP is still a half-controlled catastrophe. The construction of a facility similar to the Shelter at the Chernobyl Nuclear Power Plant is still inaccessible to the Japanese, and the measures to mitigate the consequences of the accident more resemble a tragicomedy — water is pumped into the reactor to cool the fuel lying there, after which it is possible to scoop out part of it storage, and the other part goes into the ground and from there straight into the ocean. In addition to this water, there is also groundwater, a thousand tons of which passes daily under the station. Of these, seven hundred tons are polluted - four hundred flow straight through the basements of the destroyed reactor, three hundred are poisoned from contaminated soil. All this translates again into the ocean. But even that water that was collected in barrels and pools continues to flow away - only five major leaks have occurred. In August, during the last of them, 300 tons of water containing 80 million radionuclides per million liters of radionuclides went into the soil.

Note that in 1986, there was a similar danger of radiation entering the groundwater and the Pripyat River if the Chernobyl NPP overlaps did not withstand the temperature of nuclear fuel and the weight of sand and reagents discharged to the station. However, it was possible in few days to pour a concrete pad under the station, which worked both as a cork and as a refrigerator - pipes for pumping water were laid in it, only that water did not enter the environment.

Constant parallels with Chernobyl arise by themselves, they do not even need to look for.

Each time another radiation leak occurs, TEPCO states that it is a wind, or a hurricane, or a typhoon smashed radioactive dust from the station. After the accident, Chernobyl and the surrounding area were filled with helicopters around the clock with synthetic bourgeois, which bound the dust and covered everything around with foil, and the 20-centimeter layer of the most poisoned soils was quickly removed and locked up in burial grounds.

In Chernobyl, people rushed out on the roof of the destroyed power unit, christening themselves “biorobots” - dressed in gas masks and protective suits available at that time, they threw one nuclear fuel spade back into the opened reactor and ran away, receiving an enormous dose of radiation. This story is often used in anti-Russian propaganda immediately after the accident - supposedly modern Japanese technologies will eliminate contamination without endangering people, as the USSR did.

Today we already know that a number of Fukushima "volunteers" did not even receive dosimeters from TEPCO, not to mention the means of protection, the latest maps indicating the sources of infection and other support enjoyed by all Soviet liquidators. Moreover, some of them even went to clean up the soil around the station not on their own, but on the orders of the mafia Yakuza, which were owed large sums - this was found out by a Japanese journalist who made his way along with the “volunteers” to the station and took everything on a hidden camera. He argues that the hands are so lacking that they are already taking on not just unskilled average people, but generally everyone, starting with the homeless and ending with the mentally retarded. This is indirectly confirmed by the data of the Japanese authorities, according to which at least a quarter of the vacancies at Fukushima cannot be closed. At the same time, many liquidators did not receive the money promised for the dangerous work, and some did not pay at all, although they honestly received their radiation dose. About medical insurance at the expense of the company is meaningless.

The latter is not surprising, since TEPCO itself lost the lion’s share of its profits after the closure of Japanese NPPs, and its thermal power plants are very worn out and require investments themselves. As a result, the corporation this year goes to a reduction in assets and the actual sale of part of power plants, which have nothing to repair, and more than a thousand of its employees retired on New Year.

And all this, we recall, occurs almost three years after the accident. Not so long ago, it became known that the deadline for the final excavation around Fukushima-1 was officially postponed for another three years. And there either the donkey will die, or the padish, or everything around.

Here it is important to draw one conclusion that cannot be overestimated. Large industrial and energy facilities in the hands of private corporations are an unacceptable risk for the state and the people. The platform in the Gulf of Mexico is burning - BP conceals the scale of the accident, it misses time, eventually it fills the ocean with tons of chemical reagents, forcing the cloud of oil to simply go deep and disappear from the eyes of the press. The environment is still polluted. An earthquake breaks nuclear power plants in Japan - TEPCO Corporation hides the scale of the accident, misses time, as a result still can not cope with radioactive dust and water, poisoning Japan and the Pacific Ocean from Japan to Panama.

It’s not just a matter of not wanting a large business to make the right choice between its own existence as a legal entity and the lives of hundreds of thousands of individuals. Japan is a country inhabited by extremely nationalistic people. They are so reliable in supporting their country that even rating agencies take this into account and do not lower Japan's rating, despite the rather serious debts - after all, the debts are in the form of bonds in the pockets of the local population.

And even if the Japanese corporation still continues to poison its own country and its own fellow citizens, then the force that can make capital effectively take care of people does not exist at all in nature. This is not unwillingness, it is a complete, total inability to accomplish something that can lower the stock price - and any crisis situation requires tough, unpopular, but effective and saving measures. What we didn’t see in the history of Fukushima-1.

Thus, we purely empirically come to the conclusion that any large-scale production owned by a private corporation is a potential disaster zone, regardless of whether it is managed by the notorious “effective owners” or even quite sensible people. The system as a whole will not give them maneuver in case of an accident. It is not necessary for this to own a nuclear power plant - the poison from any cold storage plant or polymer production is no better.

The population in Russia, by the way, understands this quite clearly, and the ratings of Prime Minister Medvedev show historical minimums, not least because of the stubborn policy of his government to privatize 2.0 and introduce market relations to places where they don’t belong.