Euromaidan threatens 1400 thousand people with violence, and the east of Ukraine is stuck in a crisis of self-identity 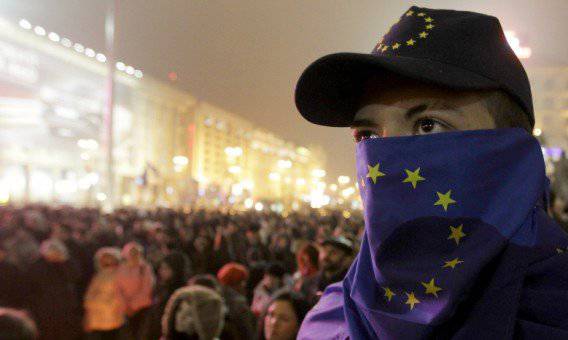 Euromaidan in Ukraine headed for the full radicalization of the protest. It is clear that one sitting on Independence will not do anything. Therefore, some citizens of Ukraine, stupefied by liberalism and the spirit of “free” Europe, began attacking prison auto-bazards, in which prisoners were transported by court order, and not “ordinary” hooligans from the Maidan, who were momentarily detained. They beat off "political bombers" not only from the executive service, but also from the "Berkut" subdivision, then began to humiliate the unit itself, forcing them to go through the "people's" (maydanuty) corridor of shame, after removing the masks. All this was made possible by the betrayal in power. But this is not enough…

Maidan activists threaten reprisals to the families of soldiers of the “Golden Eagle” unit, some sites, for example, http://bandosam.net/berkut_list.html, threatening to start publishing personal data ... But this news Yesterday and flowers, not berries ...

“Today, an action“ All-Ukrainian picketing of the Regionals ”was announced on Independence. The main highlight of the action is the following:
• crowded trip to Mezhyhirya;
• pickets of official tuples;
• All-Ukrainian strike.

In addition, "the protesters intend picket houses and offices of members of the Party of Regions ”. But this is serious! Because the life of more than 1400000 people (so many, according to Wikipedia, in Ukraine, members of this political force) can turn into hell.

Massive persecution of people will begin. And just for their beliefs. But what about the Constitution, in which a person has the right to belief, not prohibited by law? And finally, what about the “European values ​​of freedom”? Perhaps they also will create "three"?

This is evidenced by another statement made recently: "We will" split "dozens of regionals, because they, too, are afraid for their home and family." And how to understand this statement? Perhaps as a threat? In this scenario, I won’t be surprised, the second “People” may appear.. Source.

Who will stop the coming chaos? Yanukovych chose a wait-and-see tactic. I am not his supporter, but I partially agreed with such tactics, as I expected that the protest would dry out after the New Year holidays, by analogy with the Swamp. But firewoods throw everything up and throw up, so there is a limit to everything! Is counterrevolution possible from the east of Ukraine? Yanukovych is not popular right now, and this is even putting it mildly. I have never liked Donetsk either. But the fact is a fact - "Russian World" in Ukraine was left without a general. Unfortunately, the falling flag from the Russian and Russian-speaking Ukrainians has no one to catch. Viktor Medvedchuk, with all due respect, does not pull on the role of leader. Eh, now, after years, you understand that death Evgeniya Kushnareva It was definitely not accidental, I recommend to look to the end:

Every year in Ukraine "maydanutyh" will be more and more. This phenomenon does not contribute to population growth in Western Ukraine or even the deterioration of the economy, although it also affects. Simply, Ukrainian universities and schools increasingly produce people with a washed liberal consciousness and with faith in fabulous Europe, where she is waiting for fair competition with Ukrainian goods, as well as donating Anglo-Saxon law, which will even regulate the preparation of the notorious barbecue in the backyard without harming its neighbors and the right to write to men sitting. In the meantime, the Soviet generation, unfortunately, is leaving. I remember very well how the liberals in the 2000s complained to each other that the older generation was hindering their rise to power and in all seriousness discussed the possible limitation of the right to vote for the elderly. Today there is no need for this. Do not forget that the monopoly on social and political protests is left to the liberals and nationalists. Unlike Russia, in Ukraine there are no civil-political organizations "from below" that advocate purely conservative values, such as "The Essence of Time", "Trade Union of Citizens of Russia" etc., but there are many neoliberal and nationalistic movements. You can not hesitate. Literally in 10 years, monuments to Lenin will be demolished in Donetsk, and Pushkin will begin there. It’s not about communism, but about Russian.

Here is the level of "cultural" communication in the Russian-language newspaper of the Russian city of Berdyansk (Ukraine) about the events in the country. Already dominate Russian russophobes, Ivana, not remembering their kinship, come, admire:

Russian in Russia, quickly bring order to yourself, and sit down at the chess table of geopolitics, otherwise Russophobic Poland No. XXUMX from Lviv to Donetsk will be near you.

We are a severed hand and occupied by 100%, you are the rest of the body, and you still have a chance, and not a bad one.

During 2013, I wrote on the site "Military Review"that Eastern Ukraine is losing the "Russian spirit". It got to the point that in Krivoy Rog supporters are not even just the UPA, but the SS divisions “Galicia” held a parade in broad daylight! Read: Supporters of the SS Division "Galicia" are already preparing to cross the Dnieper. I am equally sick of the problems of Russia and Ukraine. It is unpleasant to read that we are losing the Stavropol Territory and are not rearming too quickly.

PS I know that now they will write to me in the comments, they say, they bring order to themselves, they insult us (Russia), and now ask for help. And I will answer: my city Berdyansk is no different from Taganrog, but the latter was lucky, he is in the Rostov region of the Russian Federation. What about the town Yeisk He founded Count Vorontsov, as did Berdyansk on the Sea of ​​Azov, but Yeisk was also lucky, he is in the Krasnodar Territory of the Russian Federation !! Thinking about it yourself or have to chew? Give me Pskov and 20 years of “independence” with the right to determine education policy, and you will be marched by the UPA in Pskov. After the collapse of the USSR, by inertia we all submit to power, because "the giraffe is big, he knows better." However, examples are enough: Siberian people, Pomeranian people. But here it is strange, representatives of these peoples, like Ukrainian, too, name is Ivanami, Sergey, Maxim, Natasha. Liberals will say that they Russified! But where are so many Russians to take then in order to Russify all and rank them among the Russian peoples? Are we African tribes that divide us as they like and give names? It's a shame! Why are you so easily deceived, oh great Russian ethnos of the great Russian plain, holding it for at least 1000 years?

Do you think the photo is a monument to Count Vorontsov in the town of Yeisk, Krasnodar Territory of the Russian Federation? No, this is a monument in the city of Berdyansk (Ukraine). 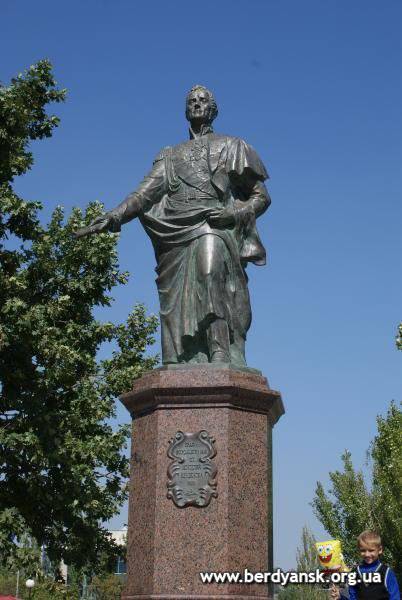 Ctrl Enter
Noticed oshЫbku Highlight text and press. Ctrl + Enter
We are
American Gulag as the newest form of capitalism"In Kiev, we fought with werewolves." "Golden eagle" told about secrets of the Maidan: snipers, capture of a mortuary, underground smithy
Military Reviewin Yandex News
Military Reviewin Google News
161 comment
Information
Dear reader, to leave comments on the publication, you must sign in.