Mujahideen will move closer to Ukraine? 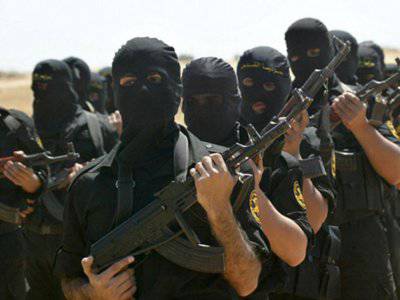 The organization of the Mujahideen of the Iranian people (OMIN), created in 1965, is an Iranian left-radical organization, whose initial goals of the struggle were to create a socialist republic in Iran and build a society without any forms of dictatorship and human exploitation. In 1970's there was an ideological split in the organization. The MEKE greeted the 1979 Islamic Revolution of the year, but then came under severe pressure from the Ayatollah regime. The consequence was the transition of the OMIN to the irreconcilable opposition to the new government and the continuation of the armed struggle in the form of terrorism. Today, both Iran and Iraq recognize the MOMIN as a terrorist organization. Previously recognized its terrorist and the West. However, at the beginning of 2009, the organization removed the EU from the list of terrorists, and more than three years later, the United States deleted it from their lists by the hand of H. Clinton.


In 1981, the explosion in the office of the Prime Minister killed Iran’s President Mohammed Rajai and Prime Minister Mohammed Bahonar. The attack was carried out by members of the Momin.

The Ayatollah regime mercilessly cracked down on terrorists. From open sources it is known that only in the period from 1981 to 1984. more than 20000 members of the organization were executed and killed. Many in prisons were tortured.

In the 1980s, OMIN “migrated” to Iraq, using the factor of the Iran-Iraq war. The militants built fortified military bases in the border areas, where they acquired heavy armored vehicles, artillery, tanksby helicopters. Of course, Saddam Hussein supported the OMIN. During the Iran-Iraq war, organization militants raided the Iranian territory, which was facilitated by the Iraqi authorities, right up to the support of OMIN detachments by powerful army forces. However, in the operation "Mersad", conducted by the Iranian army, the "Ominovites" were defeated. Then, tens of thousands of members of the organization were executed in Iranian prisons.

In 2003, US-British troops invaded Iraq. MMI groupings were disarmed, members of the organization were arrested. In Tehran, they hoped that they would be hanged or would be hanged by the Iranians, but for some reason this did not happen.

Experts believe that now the remnants of the rush feel in Iraq is not so bad. Militants continue to pose a threat to Iran. It is quite common among analysts that Americans, after the fall of Hussein, connive, if not patronize, some members of the OMIN, and the decree of the Interim Governing Council of Iraq on the expulsion of Ominites from the territory of the country simply did not work. Tehran accused the United States of double standards, proving that by the strange illogical nature of the White House’s fight against international terrorism: after all, the OMIN are terrorists. It turns out that the US administration divides the terrorists into “bad” and “good”. The decisions of Americans from 2003 year regarding the MKIN were more formal than effective. Secretary of State Powell ordered the closure of the offices of the so-called “National Council of Resistance of Iran” in the United States (this is the political wing of the OMIN). The decision was connected with the recognition of the council as a terrorist organization. On this, in fact, everything is over. Well, the money in the accounts of the organization is still frozen, as is customary in the United States.

The Bush administration, as the media wrote, used members of the organization in secret sabotage operations against Iran. The MEK participants were “imported” from Iraq to the USA, where they were seriously trained by espionage by military experts. There are no details, it is only known that the program was developed by the Bush specialists and was unlikely to be continued by the B. Obama administration. In addition, Obama is now trying his best to make peace with Tehran. There are also rumors that POMIN militants are periodically hired by Israeli intelligence services for operations against Iran. In particular, the press wrote that the killings of the Iranian nuclear scientists was an operation “Mossad”, carried out by the hands of the “Ominites”. Evidence, of course, no, some guesses and expressive charges.

At the turn of the decade, the OMIN ceased to be considered dangerous in the enlightened West. At the beginning of 2009, the organization removed the EU from the list of terrorists, and more than three years later, the United States also deleted it from their lists. It was 21 of September of 2012 of the year and is proved by the stroke of the pen of Hillary Clinton: she excluded the “Ominites” from the list of international terrorist organizations, which leads and corrects the US Department of State.

In the spring of 2013, the media reported that the Americans allegedly decided to make a new “stronghold” of the OMIN ... from Azerbaijan.

Mr. Sanai clearly identified the enemies, whose activities are aimed at creating tension in the Iranian-Azerbaijani relations. As a tool for damage to relationships, other enemies use the MEK. Here are the words of Sanai:

“I am convinced that the groups that are striving to create tension in the Iranian-Azerbaijani relations are focused on two levels. In international relations, the main opponents of establishing friendly relations between the two countries are the United States and Israel. They are making every effort to ensure that the public opinion of Azerbaijan has an idea of ​​the threat posed by Iran, and under imaginary pretexts create an atmosphere of Iran-phobia in the region. Sometimes it comes to the fact that Azerbaijan is trying to make a stronghold of the enemies of the Islamic Republic, in particular, members of the Organization of the Mujahideen of the Iranian people, who have been declared official Tehran terrorists, or to deploy military bases on its territory that pose a potential threat to Iran. Some even declare that Azerbaijan can become the place where the military attack on Iran will begin, and rumors about this are constantly being supported. ”

5 January 2014, the new information about the "movement" of members of the MKIN - this time in the direction of ... Ukraine.

In a note by Anna Mikhaylenko (IA "REGNUM") called "The US will place 3000 terrorists near Ukraine?" tells about the US attempts (with UN support) to resettle the former OMIN from Iraq. America has been doing this for two years now, but without much success.

And where are the militants "migrating" this time?

It turns out that the United States is considering the territory of Romania - the city of Craiova, located near the border with Bulgaria, as a promising new settlement site for three thousand "former" militants.

According to the former high-ranking OMIN leader, Masud Khodabandeh, the issue of resettlement was discussed during a meeting between US Secretary of State John Kerry and Romanian Foreign Minister Titus Corlatean in Brussels. It was recently in early December. At the same time, Mr. Khodabandeh wrote on his own website that he broke with the MEK several years ago, and now he is busy exposing their bad activities.

The author of the news agency REGNUM notes other interesting details. At the beginning of 2013, Albania and Germany declared their readiness to quarter several hundred of the 3000 militants. But the thing is this: the OMIN insists on resettlement of the whole group in one place, and the Germans and Albanians were not ready for such a radical step.

Currently, according to A. Mikhaylenko, militants from the OMIN live in the territory of the former American military base near Baghdad. In recent months, their camp has been attacked several times. The former militants blame the Iraqi authorities for attacks against them, but they, of course, deny their involvement.

What "shines" of Romania? Western bloggers, the journalist notes, draw parallels between the deployment of a NATO base and the possible emergence of US-controlled militants on Romanian territory. However, there is another aspect. The resettlement of several thousand OMIN militants under the side of Ukraine, which Euromaidan is reeling in, opens up opportunities for the implementation of power scenarios for a change of power. As the author believes, militants can become a destabilizing factor for Transnistria.

The Ukrainian theme of the “Ominovites” interested the historian Lev Vershinin. The expert spoke on the site IA "REX".

According to L. Vershinin, the OMIN and its war wing, “The Iranian National Liberation Army,” are not the same. The left-wing forces of the army defeated the war with the ayatollahs, and the Mojahedin (Marxists with a shade of "Islamic justice") survived and turned into a closed group, the meaning of which is to eliminate the ayatollah regime. All the unconscious cast off the ranks, expelled or killed, and recruiting from the youth is done according to the principle of full submission and full refusal of reasoning.

The White House is really minesting. Omin seems to be the lucerne

But what about Ukraine?

The historian also points to the notorious “Euromaidan”, whose leaders wind the people into a “permanent revolution”. The stage of cheating is already such that every ratio is turned off, says Vershinin. This, alas, is confirmed by the activation of totalitarian sects leading in the “revolutive” tabeur propaganda.

“Therefore, on a special occasion, on the occasion of the to dislocate this beautifully prepared, fanatical and 100% controlled by the United States force in Romania, right next to the borders of Ukraine, on the eve of imminently future events, not speaking about the issue of the Transnistrian Union of Martial Arts, because of the process of marching

So anyway, we note in conclusion, it is still difficult to judge. But one thing is clear: the militants are still an effective force, with which the West has removed the label of terrorism in advance. The decision of the members of the OMIN to settle in the new country of residence by one community embarrassed even the Albanians. The very hardness of this decision suggests that behind the backs of the “Ominites” there are powerful patrons — overseas, of course. The inscription of Hillary Clinton's pen from 2012 shows that the White House has planned something for “former” extremists ...