January 14 2014
25
Currently, 3D printing technology is developing at a very fast pace. In just a 2-3 of the year, an 3D printer will become in our world as much an ordinary thing as a personal computer, laser printer or scanner today. For this reason, people today are increasingly concerned about the problem that will arise when distributing these printers and related technologies. This is a "printout" of various rifle weapons - from compact pistols to full-size assault rifles.


It is no secret to anyone that humanity always seeks to use new, only emerging technologies not only for the good, but also to the detriment of itself. In this regard, 3D printers are no exception. Not everyone is ready to use these devices in advertising, toy manufacturing, medicine, or just for their everyday hobbies. For someone will become a fad production of weapons. Today, any owner of an 3D printer, if desired, can make a plastic “samopal” at home, which can be quite used as a small arms.

How is cream drawing applied to an ordinary biscuit cake? A confectioner from a special cooking syringe or rolled bag squeezes the cream onto the surface of the cake. Changing the nozzles, you can change the pattern or font on the cake. Imagine that the pastry chef is suddenly replaced by a robot, and the pastryer's hand is replaced by a mechanical one, which works in accordance with the program laid down. This is exactly what is happening today in large culinary factories. By the same principle, you can make a variety of chocolate figures. At the same time, cream or chocolate can be replaced with a special powder of quickly hardening plastic, with which you can create various toys, cups, plates, chess pieces, as well as other small things. In just a few years, these technologies will become available to the masses, and in the worldwide network it will be possible to find a huge number of pirated (and not only) digitized models of everything and everyone. 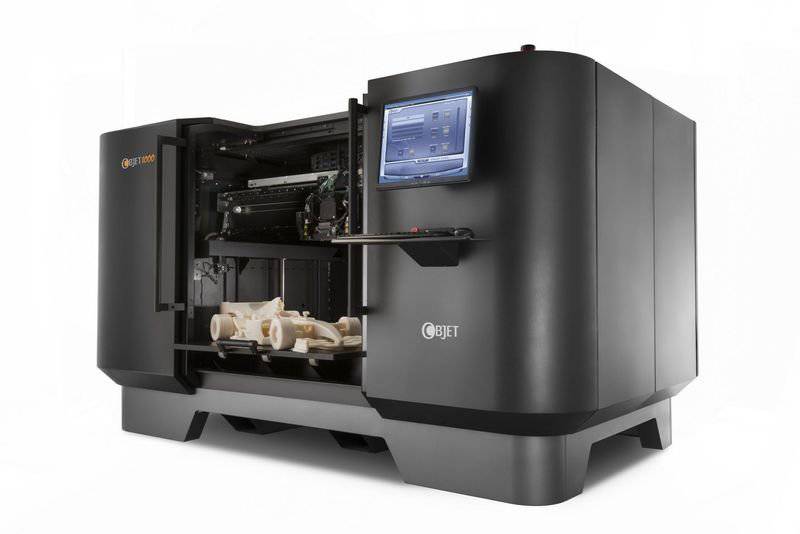 In the near future, McDonald’s fast-food chain expects to purchase 3D printers in order to print toys on them. Currently, the price of consumer 3D printers ranges from 1,5 to 8 thousands of dollars, which makes them expensive “toys”, but at the same time quite affordable. At the same time on the Internet you can find materials that allow you to make such a printer at home; drawings of printers, as well as all the necessary software for their work today can be found on the Internet. Not so long ago, in Russia, a group of enthusiastic developers from Novosibirsk published on the network information about the SibRap 3D printer they collected independently. To print on this printer three-dimensional objects used molten thread from ABS plastic. The developers of the Russian printer estimated the cost of the parts that are necessary for its creation, all in 20 thousand rubles.

Currently, Gartner - one of the largest research firms in the field of information technology - predicts an increase in the volume of industrial production of these devices. Supplies of 3D printers worth up to 100 thousand dollars increased by 2013% up to 43, the market volume was 412 million dollars. At the same time, individuals account for 87 million dollars, for companies - 325 million dollars. According to analysts, in 2014, the supply of 3D printers will increase by 62%, and the total amount of sales will be already 669 million dollars, in unit terms, the growth in supply of printers will be near the mark in 50%, it is planned to sell up to 56,5 thousands of similar devices. In 2015, the doubling of the number of 3D printers delivered to the end consumer is predicted, this will be due to the appearance of new players on the market and increased competition between them, which will lead to lower prices.

The greatest interest in the new product was shown in the USA, where in 2013, the 3D printer was first used to make weapons. It is worth noting that the second of the 10 amendments, which form the so-called “Bill of Rights”, allows all American citizens to keep and carry firearms. In this case, the weapon could be made at home, in the event that such a hobby did not imply a commercial background. This right did not fail to take advantage of the enterprising 24-year-old American law student Cody Wilson, who decided to independently test the nerves of the American authorities for strength. Wilson became the founder of the company called Defense Distributed, its main purpose was the creation, accumulation and dissemination of information about the development and manufacture of firearms using the 3D printing method. 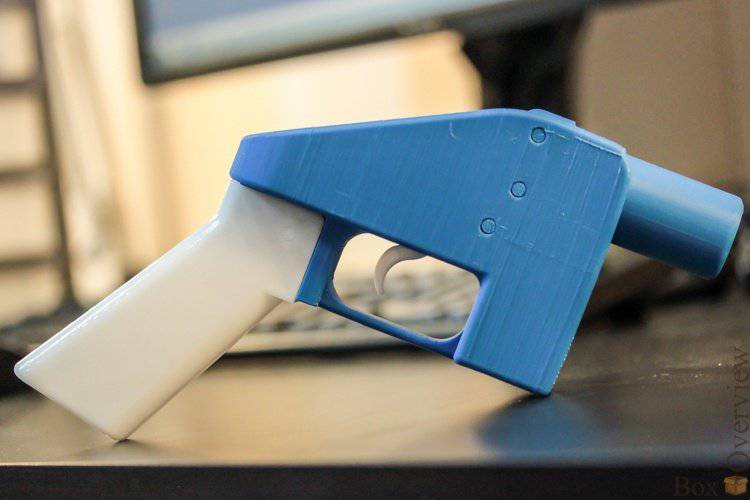 Gun "Liberator"
Cody Wilson decided to personally check how the American government would behave if, at one fine moment, the production of weapons ceases to be the prerogative of the state and becomes the property of the masses. Agree that far from everyone could make a full-fledged firearm on their own at home, but the use of 3D printing makes this process accessible to the layman. In the US, a young man very quickly found a large number of supporters who helped him raise the necessary amount of 20 thousand dollars. With this money, Wilson leased a 3D printer owned by Stratasys.

Soon the printer was delivered, but Wilson could not even unpack it. Stratasys unilaterally terminated the agreement concluded with the student, citing the fact that Defense Distributed did not have a license to manufacture small arms. As a result, 3D printer was taken away, and Cody Wilson had to deal with registration of the appropriate license. As a result, drawings of various weapon parts and the first samples of small arms, which can be made with an 3D printer, began to appear on the worldwide network.

Wilson proved that it is possible to manufacture small arms at home with the help of modern technology. In the network, he laid out the drawings of a pistol of his own design, which received the designation "Liberator" (from English - "Liberator"). According to the model presented by Wilson, it is possible with the help of a three-dimensional printer to make quite combat-ready weapons. Not surprisingly, representatives of the Bureau for the Control of Alcoholic Drinks, Tobacco Products and Small Arms, who had tested the Liberator, printed their two copies on their own quickly enough. The first sample immediately exploded while attempting to shoot with live ammunition, while the second sample of the pistol was able to withstand a series of 8 shots. 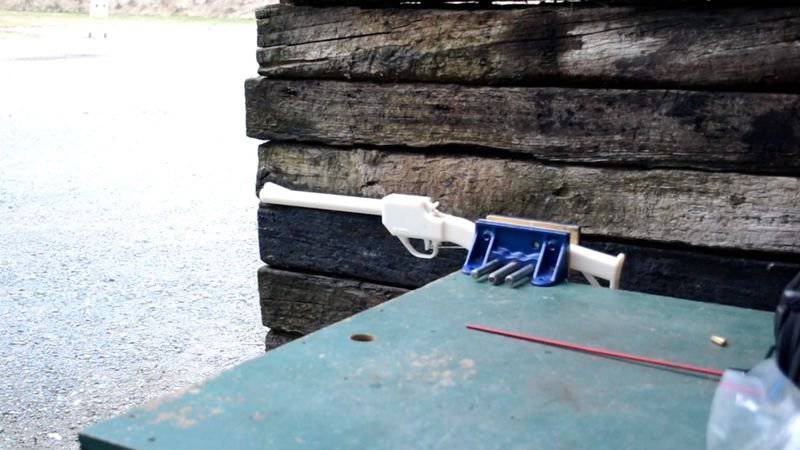 The first rifle, made on 3D-printer
Therefore, there is nothing surprising in the fact that the tests have caused serious concern to the US administration. Every year in the States about 200 thousands of people become victims of the violent use of firearms, and almost every year there are mass murders of people by some regular psychopath. Against this background, the US authorities are pursuing a policy of introducing stricter norms for the circulation of small arms in the country and imposing restrictions on its sale. For example, US Secretary of Justice Eric Holder called on congressmen to extend the current US ban on the manufacture of pistols and rifles, which cannot be detected with the help of modern metal detectors, by 25 years. This alarm is understandable, because plastic weapons can be easily carried to crowded places or on board an aircraft.

As a result, Cody Wilson had to remove the drawings of the Liberator pistol from the Internet. He went for it at the request of the US Department of State. However, by the time the drawings were deleted, at least 100 of thousands of users already managed to download them, later they appeared again on file sharing sites and on torrents. In addition, not so long ago, information appeared on the Internet that Wilson did not stop at what had been accomplished and produced on the 3D printer a model of an assault rifle M-4, which could withstand 6 shots from the expected 20. It is worth noting that the result did not impress Wilson, but one should not discount the fact that this is only the beginning. Who knows where this technology will lead humanity ...

Anyway, the US Congress in December 2013 of the year extended the existing ban on the production of small arms in the country by 10 for years, which could not be detected by metal detectors. The Senate approved the adopted document. To such steps, the US authorities are pushing fears that, in the near future, everyone will be able to manufacture an all-plastic pistol using a home 3D printer, which, due to combat capabilities, will have little to do with combat analogues. 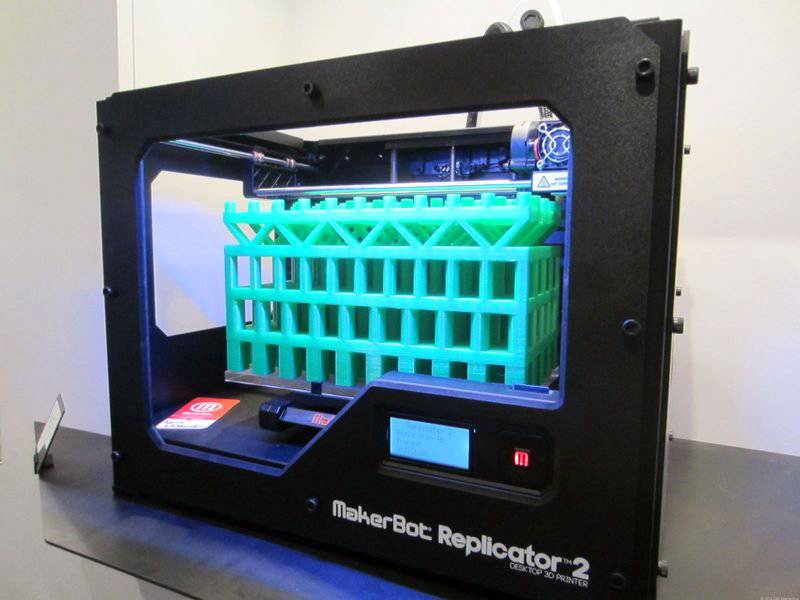 If we talk about printing at home with the help of a household 3D printer of the legendary Kalashnikov assault rifle, then he, perhaps, has a quiet life for many years without 3D copying. You can print it, but only in the role of a model, theatrical props. The AK model, made of ordinary plastic, will be deprived of its main advantages, for which it is appreciated and its tremendous reliability and unpretentiousness.