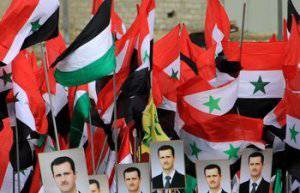 How do you want the West to somehow legitimize their actions in support of outspoken terrorists! Focusing on the most brutal crimes of the Syrian "opposition", such as the massacre in the city of Adra, Damascus province, mortar shelling of residential areas, attacks against schools and their students - some countries are trying to condemn every counter-terrorist step of the Syrian government.


For the second time, these countries are trying to push through the UN Security Council a statement condemning the "bombing" of the city of Aleppo, allegedly carried out by the Syrian army in December last year. But information about this episode was provided only by the “opposition”, there is no other evidence that it actually took place, no investigation was conducted.

For the first time in late December, a draft statement on this subject was submitted to the United States. Russia proposed to amend the document so that it does not look one-sided. As a result, Washington refused to change at least the letter in its document and removed it from voting altogether. Apparently, the US authorities themselves are not fully convinced that the bombing episode was, and can not provide any convincing evidence of what they tried to accuse Syria.

But the West did not calm down on this. And a similar draft statement to the Security Council was submitted by Britain.

History repeated Russia once again proposed to make the document more balanced and to condemn the brutal crimes of the Syrian "opposition" against civilians. As a result, the British draft was also removed from the vote.

These two demarches are difficult to explain with anything other than a new information attack against Syria, as well as against Russia on the eve of the international conference on Syria, Geneva-2, which is scheduled for January 22.

Firstly, the West does not want to condemn the crimes of the “oppositionists” terrorists, despite the fact that there is all the evidence of these atrocities. Secondly, the West needs to throw a stone in the garden of Russia: they say, Moscow is blocking the second statement of the UN Security Council. Although Moscow does not block them at all, it proposes amendments, after which the project is immediately removed altogether. It turns out that this is not Russia that is taking an unconstructive approach, namely Washington and London refuse to somehow condemn the terrible terrorist attacks of the “opposition”. There is only one explanation for this: according to the well-known saying “the cat knows whose meat has eaten”, Western intelligence agencies realize that they are complicit with barbaric crimes, supporting those who commit them. Of course, both London and Washington, as well as any other country supporting the bandits, will prevent indirect condemnation of their own actions.

But in the world there are still sober forces that oppose such an approach. Thus, the United Nations Children's Fund (UNICEF) strongly condemned one of the latest atrocities of the “opposition” - an explosion of a mined car near a school building in the village of Al-Kafat in Hama province, which killed 17 people, mostly children and teachers. This explosion thundered when the children ran out of exams, and they were going home.

UNICEF Representative Yousef Abdel-Jalil pointed out the need to respect international law, especially its provisions relating to the protection of children.

But the UN Security Council did not even raise the issue of condemning this atrocity of terrorists.

Taking advantage of this impunity, the bandits continue their heinous atrocities. 12 December residents of the city of Homs became victims of a double crime. In the residential quarter of Karm Ash-Shami, the bandits fired two rocket projectiles. Four citizens died, many were injured.

From the village of Telbis, bandits fired a passenger minibus from a mortar in the town of Homs in the Az-Zahra district. His driver died, two others suffered.

Unfortunately, such episodes occur too often, but they and their victims are completely ignored by the UN Security Council and others - those who immediately respond to any complaint of the "opposition" with angry statements.

Meanwhile, Foreign Minister Sergei Lavrov went to Paris to discuss issues related to the holding of the Geneva-2 conference. He held consultations with representatives of the external "opposition", in particular, the leader of the so-called "National Coalition" Ahmad Jarboy, as well as the leader of the Lebanese "March 14 Coalition" Saad Hariri, who is known for his complicity with the terrorists in Syria. Lavrov is making efforts so that the “opposition” will finally form a delegation to participate in the “Geneva-2”. But, in violation of all the agreements, these forces continue to set obviously impossible conditions, trying to predetermine the course and outcome of the conference. Jarba, like a parrot, reiterated after his masters that, they say, "For Assad there is no place in the future of Syria." Thus, this puppet of the West is once again trying to speak on behalf of the Syrian people, who must have their say at Geneva-2, and at the upcoming presidential election. All over the world, such issues are solved through ballot boxes, and Syria is no exception.

Today, another important issue must be resolved regarding the holding of the conference - the participation of Iran in it.

Iranian authorities have repeatedly declared their readiness to participate in the event. Syria, Russia, Germany and many UN member states are also speaking in favor of this. Only two countries oppose Saudi Arabia and the United States. But remaining in the minority, Washington places unacceptable conditions. Secretary Kerry proposed this option: that the Iranian representatives will not participate in the main meetings, but will be present on the sidelines. Tehran rejected such a humiliating "proposal."

The states explain their position by saying that the Syrian "opposition" is against the participation of Iran in the forum. But, according to the agreements, the preconditions for the conference are unacceptable. The Syrian leadership, for example, could oppose the participation in Saudi Arabia and even the United States in the Geneva 2. But Syria complies with all the agreements, while Washington prefers to openly cheat. This is the whole essence of US foreign policy, which are actually trying to thwart the conference.

Ctrl Enter
Noticed oshЫbku Highlight text and press. Ctrl + Enter
We are
Situational analysis of the death of the MH17 flight (Malaysian Boeing 777), made on the basis of engineering analysis from 15.08.2014Damascus: mortar rains
Military Reviewin Yandex News
Military Reviewin Google News
13 comments
Information
Dear reader, to leave comments on the publication, you must sign in.