January 14 2014
17
Great influence on accuracy weapons giving returns. An impulse directed back and up shifts the barrel away from the aiming line, because of which the bullet can be fired with a deviation from the desired trajectory, and the shooter has to constantly adjust the position of the weapon. Over the past decades, attempts have been made repeatedly to get rid of this unpleasant phenomenon. In the past decade, the American company KRISS USA, Inc. took up the problem of redemption. In the middle of the two thousandth, she created a Vector submachine gun with balanced automatics capable of fending off recoil. In the future, the designers of the company continued their work in this direction and by the middle of 2009, they prepared documentation on the new project. This time the purpose of the engineering work was to create a high-precision pistol. 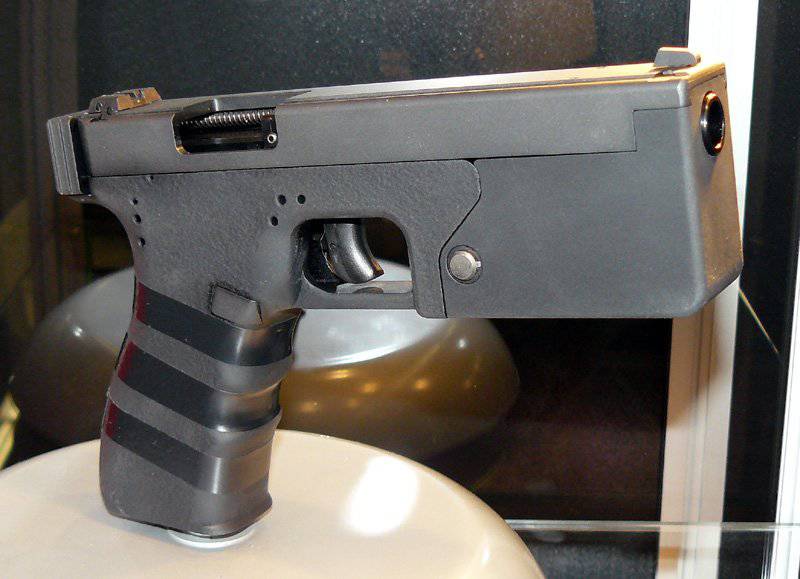 At the beginning of 2010, the designers of the company KRISS USA Renault Kerbra and Antoine Robert received US Patent No. 20100031812 on the original design of the pistol with the “shutter rollback stretched in time and mechanisms to control the recoil and toss the barrel”. In the future, the project of such a gun was called KARD. The design of the KARD pistol used the idea that appeared in the previous draft of the submachine gun. To improve the accuracy of shooting, it was proposed to equip the weapon with a special balance bar. When firing, the balancer, which is mechanically connected with the bolt, should move downwards and thereby compensate for the recoil momentum, as well as the vertical toss of the barrel.

Most of the external parts of the KRISS KARD pistol are made of impact-resistant plastic. Early prototypes of this pistol had a characteristic “box-like” appearance, in which a peculiar influence of Glock brand weapons was felt. However, the internal mechanisms, as well as the principle of their work, are significantly different from those used on other modern pistols.

The KRISS KARD pistol is designed to use .45 ACP cartridges. With some modifications automatic weapons allows you to use other ammunition. The power supply is carried out using a box magazine placed inside the pistol grip. Due to the possibility of using various compatible stores, the stock of cartridges can vary within fairly wide limits.

The casing of the KRISS KARD pistol shutter is fixed. Inside it is rigidly fixed trunk. Such an attachment of the barrel to the frame is actually one of the methods to improve the accuracy of shooting. The shutter of the gun is lightened and not connected to the casing. For cocking weapons on the back of the bolt provides a rectangular block with notches on the sides. The pistol is cocked in the same way as other weapons of this class: the bolt is retracted and, returning to its place, it sends the cartridge to the chamber. Automatic pistol made according to the scheme with a semi-free shutter: the shutter is connected with a special balancer, affecting the speed of its movement. 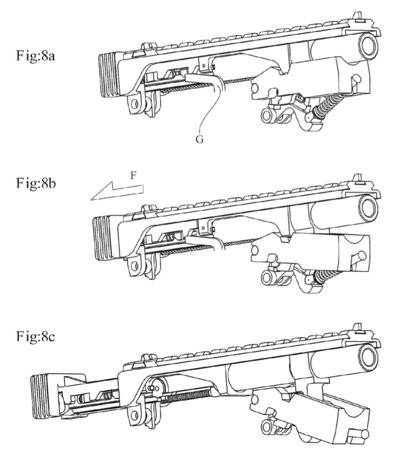 In front of the gun, under the barrel, there is a part that distinguishes it from other small arms. On the special system of brackets and springs a balancer of complex shape is installed. During the shot, the pistol bolt under the influence of recoil begins to move backwards. With the help of a system of springs and the bolt is connected to the balance bar. Moving backward, the shutter shifts it. Being fixed to the rear end, the balancer abruptly turns a small angle down and back.

The additional mass in the form of a balancer slows down the movement of the bolt, which is why the recoil impulse affects the weapon for a longer time. This means that the arrow becomes easier to control the weapon. Moving down, the balancer also partially solves the problem of tossing the barrel. Under the effect of recoil, the barrel tends to rise upwards, but a relatively heavy balancer creates a moment of force directed in the opposite direction. By selecting the weight of the balancer, the KRISS KARD pistol design can be adapted to the use of any ammo.

The use of a moving balancer led to the formation of the characteristic appearance of the pistol. Early prototypes of the KARD model had a large front end casing. The box-shaped casing, the bottom surface of which was flush with the trigger guard, gave the pistol a futuristic appearance, but increased the total weight and could adversely affect the usability. Later the body shape of the KRISS KARD pistol was refined. The contours of the upper part of the casing of the barrel have changed, and the casing of the balancer has acquired a new triangular shape. In addition, on the bottom of the latter appeared Picatinny rail for installing the necessary equipment.

Automatic pistol, proposed by KRISS USA, has several advantages over existing schemes. First of all, it is the increased accuracy of firing. The recoil component, directed backward, is partially compensated by the movement of the balancer. In the same way parry toss the trunk up. In addition, the applied system stretches the effect of recoil in time, which helps the shooter to hold the weapon in the desired position during the shot.

The presented KRISS KARD pistol specimens had a Picatinny rail only in front of the balancer body. The design of this gun, in which the casing of the bolt is rigidly fixed on the frame, allows you to place the bar for the sight and on the upper surface of the gun. Thus, the shooter, if necessary, will be able to use not only a standard open sight, consisting of a front sight and a rear sight, but also other equipment, including a laser designator. A fixed barrel in addition to performing its direct function, which is to improve the accuracy of shooting, can facilitate the installation of flame arresters or silent shooting devices.

It is quite clear that the KRISS KARD pistol, like many other bold projects of promising weapon systems, is not without flaws. Perhaps the most notable of them is the large casing of the balance weight, because of which the shooter will need a holster of a new design. Another disadvantage is directly related to the architecture of internal mechanisms and is a congenital problem of all small arms with balanced automation. The massive balancer increases the overall weight of the weapon, and its relief will not allow to achieve the required characteristics.

Almost four years have passed since the first information about the KARD pistol appeared. During this time, no new information about the future of the project has appeared. Probably, tests of prototypes showed not only the advantages, but also the disadvantages of the new gun, after which its refinement began. The revision of the gun is not yet complete. Moreover, there is every reason to assume that the project was closed. This version is supported by the fact that KRISS USA, Inc. is currently producing only the Vector submachine gun and several modifications of it, and the KARD project is not even mentioned on its official website.