Europe as the second CIS?

January 15 2014
23
After the Belovezhsk agreements the gloomy December 1991, the mighty USSR died and the bastard CIS was born instead of it. The European Union, into which some countries still strive (for example, Serbia or Ukraine), is now reeling from the wave of separatism, which other analysts and economists believe can lead to the collapse of the EU’s political and economic system, the destruction of the supranational government sovereigns ”- yes, about the one that once caused the decision of three politicians in Belovezhskaya Pushcha. 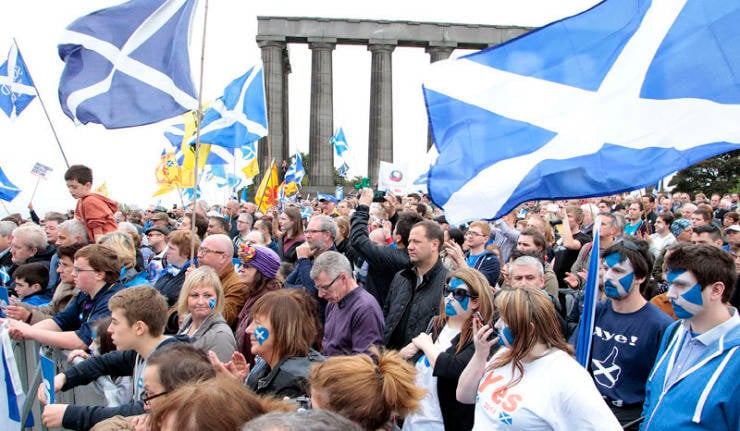 At the hearing of the European public in the first place, Spain and the UK. The Basque Country is going to separate from the first, Scotland may fall away from the second in September (along with oil).

Bilbao, the administrative center of the Spanish province of Biscay, has recently withstood the one hundred thousandth march of the Basque separatist organization ETA (ETA, Euskadi Ta Askatasuna, Basque Country and Freedom). The marchers demanded a mitigation of the prison regime for their activists on camera. More than two years ago, ETA ceased tactics of systematic explosions and murders of officials and policemen, which lasted for forty years (Euskadi Ta Askatasuna was created in 1959-1962). This organization, which seeks the separation of the Basque Country from Spain and the creation of the state of Euskadi, is responsible for the death of more than eight hundred people, not to mention material damage.

Despite the fact that since the time of Franco, who banned the Basque language, the latter received the status of the state, and the province - the status of autonomy, local radicals demand secession from Spain.

The country and the Catalans are torn apart - they also have autonomy, but this is not enough for them.

They speak for independence in Andalusia, Valencia, Galicia, but not as actively as in the Basque Country or Catalonia.

What will be left of Spain if the local parade of sovereignties takes place? A rhetorical question. Madrid is very afraid that the first minister of Scotland, Alex Salmond, who speaks for the independence of his homeland, will give a bad prime to the Basques and Catalans, and therefore the Spanish authorities have officially announced that they will block the way of the independent Scotland in the EU.

Scotland is confidently walking along the curve (or straight, this is someone like) the path to independence in the forefront. You will not be frightened by Salmond with red tape when joining the EU and NATO, mobile banking roaming from Britain, failure of the Kingdom's mail to serve the Scots, or, finally, difficulties in ensuring security and creating your own regular army. Scotland has offshore oil, in the event of popping poles into wheels, Edinburgh will easily forgive the British for part of the joint public debt, and simply refuse the Scottish people from the Trident nuclear submarine base: they don’t need nuclear weapon. In the event of a victory in the referendum, Salmond intends to remove nuclear weapons from an independent territory and prohibit them constitutionally. Scotland will be declared a nuclear-free zone.

Six months ago, the first minister lucidly explained to the Scots, British and the whole world community that when independence was achieved his country would deviate 95% from UK oil and gas reserves - while observing the current practice of equidistance from the middle line (talking about the North Sea shelves).

The background of the Scottish independence speeches is not only national, but also economic. Every year a real gold stream flows into the London treasury - almost twenty billion pounds, and all this is just taxes from the sale of Scottish oil. Not Edinburgh, but London decides how to spend this money. Therefore, Salmond knows how to scare British politicians. And those, yes, are afraid.

It came to the point that D. Cameron began to seek help from ... Putin. Something quite extraordinary.

In the article "Cameron asked Putin to help him curb Salmond" ("Herald Scotland", UK; source of translation - "InoSMI") David Lisk and Paul Hatchen said that the government of David Cameron hopes for the support of the President of Russia in a dispute with Scotland about its withdrawal from the United Kingdom.

The authors recall that, according to ITAR-TASS, Britain is “extremely interested” in supporting Russia at the referendum on the independence of Scotland: after all, Moscow has taken the post of chairman of the Big Eight this year.

In response to reports of Cameron’s desire to enlist Russia's support, the first minister of Scotland, Alex Salmond, said: “These reports from Russia raise serious questions about the backstage games of the British government. If these messages correspond to reality, then it turns out that Westminster was caught red-handed, trying to stir up hostility towards Scotland, instead of representing the interests of the Scottish people. ”

Recently, journalists say, Cameron, apparently trying to improve relations with Putin. The author of the ITAR-TASS report focused on this very moment. London hopes to establish “special relations” with Moscow on the eve of the summit in Sochi. “We look forward to Russia's consultations at the G8 summit,” ITAR-TASS quoted the words of Cameron’s cabinet representative.

This summit will be attended by the leaders of France, the United States, Canada and Russia. All of them, correspondents write, have a negative attitude towards the independence of Scotland.

And after Scotland, independence will be talked about in Northern Ireland and in Wales. However, they have been talking about this for a long time.

The political positions of the former “Great Britain” in the world will be seriously shaken.

And what about other EU countries? Well, for the time being no one except Cameron is asking for Putin’s help, but after all, no referendums have been appointed, except in Scotland. The Spanish government, arguing its position by the Constitution, is blocking questions about the independence of the Basques, the Catalans and anyone else. (By the way, in the last elections in the Basque Country, the Basque Nationalist Party won the majority of votes).

But in Belgium, the Flemish nationalists, after winning local elections in Flanders (autumn 2012), issued a natural ultimatum to the government, demanding that the country be turned into a confederation. The leader of the New Flemish Alliance party, Bart de Wever, who received an 38% vote in Antwerp and actually took control of the country's second largest economic center, said that the party "became the largest party in Flanders after the Second World War", which "received a vote of confidence Flemish to overcome the economic and political crisis. " The Flemish politician stressed that with French-speaking Wallonia as part of Belgium, he was not on the path: "We have two cultures and two democracies ... Our nationalism is not a goal, but a means of moving towards our own democracy in Flanders."

Bretons live in France in Brittany, and not the French at all. In Alsace, the party of the local “regionals” called “First of all, Alsace” advocates healthy nationalism, from which it is close to separatism. Even in relatively poor Corsica - and that is separatism.

But the real French blow to the EU will, of course, not Corsica. The knife has already brought the Marine Le Pen - that opposes the existence of the European Union, but goes with this slogan ... to the European Parliament.

Her parties - the “National Front” - are predicting a victory in the elections to the European Parliament this year. The rating of nationalists is higher than that of the French socialists. Against the background of the low rating of Hollande and his unpopular decisions, as well as against the background of the economic crisis, the National Front Party is confidently moving towards a political victory.

In the appendage, you can add that in Italy the north is traditionally dissatisfied with the south: there, they say, new Corleone is born and trades through racket, banditry and drug trafficking (by the way, Mario Puzo made up his character), and therefore Italy is better divided approximately in half. Sicily can even become an independent island, where the mafia will simply become a government, and much more efficient than the current one in Rome.

There are national separatist movements in other European countries. But what to say: dissatisfied are found even in Greenland.

Already a term has appeared: the Balkanization of Europe. Pointing some woe-politicians to historical An example of the split of Yugoslavia. This "Balkanization", according to the forecasts of some analysts, can start after the collapse of the specific principalities of Britain.

From all this it is clear that the EU may not fall into the countries of which it was formed, like a puzzle, initially. After a few years, the nationalist acceleration attributed to the processes of disintegration, for example, Scotland and the Spanish provinces, can lead to an amazing redrawing of the map of Western Europe. I remember the recent forecast of Patrick Buchanan, which we have already written about in “VO”: the European civilization is barely left to live until the end of this century. And indeed: even if we forget about the parade of sovereignties, then tolerance plus Islamization plus homosexuality plus an aging population threaten to inevitably turn the European Union and its state into pshik. That’s why ultra right parties that are against all of the above are popular in the EU.