Passion around the outflow of capital from Russia. Fights for statistics

January 14 2014
42
The first couple weeks of 2014 of the year passed, the long weekend ended - and economic experts got the first in the new year on the dynamics of capital outflows following the results of 2013. The figures presented by different economic departments vary by about 10-12%. The average indicators of the scale of the output of their economies in Russia once again make us think about the need to build effective barriers to such a large-scale outflow.


Guided by the calculations of the Ministry of Economic Development (MED), the net outflow of capital from the Russian economy over the past year amounted to about 57 billion dollars. This turned out to be lower than the forecast presented by the same agency at the beginning of last year, by about 15%.

It should be noted here that the data provided by Russian economic experts differ significantly from those given by foreign experts. For example, in 2011, the outflow of capital from Russia, estimated by specialists of the Russian Central Bank, differed from the calculations made by World Bank economists by $ 48,2 billion dollars. The Central Bank presented the results on the 80,5-billion-dollar capital outflow from Russia abroad, the World Bank issued a value of 32,3 billion dollars. If we compare the figures of the crisis period, then the difference is even more significant. So, following the results of 2008, the Russian Central Bank reported a huge capital outflow in the amount of 133,7 billion, the World Bank recorded an outflow of $ 16 billion. As they say, feel the difference ... 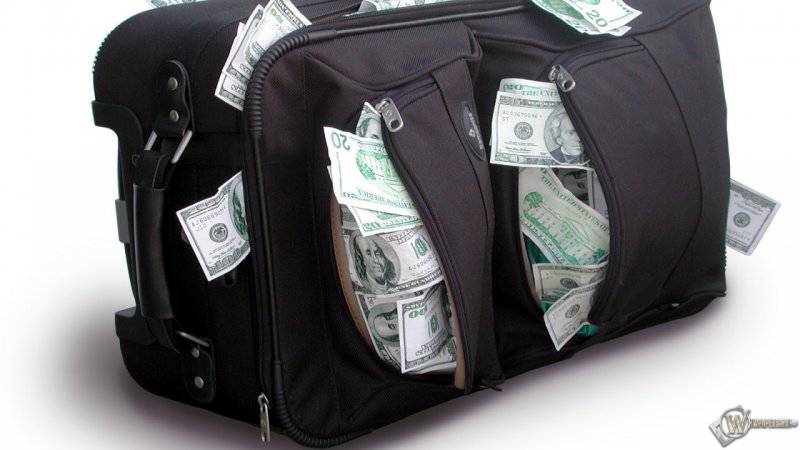 Where does such a difference come from, and which experts in this situation can they trust - Russian or international? It is immediately worth saying that the data on the volume of capital outflows abroad are not just “bare” numbers, which even can be obtained on the basis of the use of very sophisticated economic and statistical formulas. These are the values ​​that can have an impact - the influence is not only economic, but also political. For example, the rate of national currency and, accordingly, the competitiveness of the economy depends on the rate of outflow of capital abroad. As a result, manipulations with figures may cause one or another scale of exchange tectonics, which, in the end, is quite capable of hitting the political situation in the country.

According to Andrei Klepach (Deputy Minister of Economic Development), if the outflow is sufficiently high, it can affect the rate of the Russian ruble, and this will affect that the rate will gradually decline in relation to the leading world currencies. In principle, this is what we see today - the ruble rate over the past few months has been falling both in relation to the US dollar and in relation to the single European currency. Andrei Klepach calls such dynamics for the Russian ruble negative. However, is it negative on the scale of the entire Russian economy? Strangely enough, but a controlled process of weakening the Russian ruble can stimulate the competitiveness of domestic production. In other words, a rather weak (but, if I may say so, controllable weak) ruble makes it possible to make Russian goods cheaper in comparison with foreign-made goods both inside Russia and beyond its observable limits.

By the way, roughly the same scenario has recently been developing the Chinese economy, which Western economists and politicians (primarily, of course, the US) criticize for relying on artificially (according to American "partners") the undervalued yuan against the dollar. True, we must admit that the volumes of Russian production and Russian exports are far from the corresponding Chinese volumes, and therefore the relatively low rate of the national currency still needs to be able to properly dispose of.

It turns out that the same to the West (and the headquarters of the World Bank is located in the United States, the president of the World Bank is an American citizen) it is advantageous that the ruble exchange rate be high enough against the dollar (first of all against the dollar). How to achieve this without any technical effort? As an option - to publish data that the volume of capital outflows from Russia are very small (in the scale of the entire economy). As a result, the following logical chain appears: publication of data on low rates of capital outflow abroad - strengthening of the ruble against the same US dollar - rise in the cost of Russian goods relative to foreign goods - reducing the competitiveness of the Russian manufacturing sector - new subsidence of the economy.

Interestingly, just over a year ago, Forbes issued material under the heading “Myths about capital outflow: how much money is really being withdrawn from Russia”, in which the idea that no one in Russia is able to correctly calculate the scale of the outflow is actively promoted, everyone operates with some kind of wrong formulas, forcing the situation - they say, you need to trust foreign data (especially the World Bank) - and you (that is, us) will be happy ...

But if the substantial scale of the outflow of capital from the country can weaken the national currency, adding to the competitiveness of the Russian economy, then maybe in that case we should not be so active in reflecting on the multi-digit numbers of the outflow in dollars? No, not in vain. Figures of capital outflow are only one of the components that affect the competitiveness of the Russian economy. Therefore, trying to build on this kind of positive economic base is simply naive. The fact is that “runaway capital” is also a kind of diagnosis of the effectiveness of regulatory bodies - some equivalent of the scale of internal corruption and the ability to fight it. But if so, then it turns out that the same Western experts, artificially lowering the scale of capital outflow from Russia, for some reason, hide the true scale of corruption in our country. These experts, of course, would not like to hide anything in the information plan, but it does not come out ...

Is this possible? It turns out, even as you can. After all, if the same World Bank gives out real figures of the volumes of “runaway capital” from Russia, then this is another reason to talk about the need to return money to Russia. - To return funds laundered in foreign financial structures acquired by Russian “businessmen” in dirty ways and brought out of the Russian economic and criminal jurisdiction. Will Western economic and law enforcement institutions want to do this? Of course not. As a proof: these very institutions did not shy away from pocketing the Russian “dirty” billions placed in Cypriot banks — in fact, having once again laundered the laundered money — in their own, of course, in favor ...

In this regard, it is interesting to know what the Russian structures are doing in order to return the funds leaked from the Russian economy, obtained by certain individuals and legal entities, to put it mildly, not in the most transparent way. On this occasion, a few days ago, the Prosecutor General of the Russian Federation Yuri Chaika spoke in his interview Rossiyskaya Gazeta journalists, telling about how the process of asset recovery is going.

Yuri Chaika said that the Prosecutor General of the Russian Federation is taking a series of measures aimed at ensuring that finances return to the Russian economy. In particular, we are talking about submitting requests to different countries of the world and territorial associations (Cyprus, the Bahamas, France, Latvia, Ukraine, Serbia, and the United Kingdom), according to which Russia can recover a substantial amount of funds withdrawn by certain individuals. In particular, we are talking about the assets of Ashot Egiazaryan (ex-deputy of the State Duma), Alexei Kuznetsov (ex-finance minister of the government of the Moscow region), Andrey Borodin (ex-head of the Bank of Moscow), Boris Berezovsky and other fairly well-known people.

According to Chaika, Ukraine immediately after a request from the Russian Prosecutor General’s Office seized Berezovsky’s property, as well as stakes in Ukrainian enterprises owned by the oligarch’s family (inherited by the family). Latvia has arrested Borodin’s elite housing, a case is being heard in a Serbian court arresting the arrest of all the same Berezovsky’s 8 companies. There are precedents for the return of funds that left Russia.

The main problem so far is that far from all countries are ready to sign agreements with Russia on joint work on the return of laundered money. Not all countries are willing to part with the fact that Russian embezzlers have withdrawn from the Russian economy, leading to quiet financial havens. If the borders of Russian contacts at the law enforcement level could be expanded, the return of capital obtained in Russia by criminal and semi-criminal means and taken abroad would be a technical matter.

Ctrl Enter
Noticed oshЫbku Highlight text and press. Ctrl + Enter
We are
Or maybe just the way it should? A couple of words about the "Immortal shelf"Situational analysis of the death of the MH17 flight (Malaysian Boeing 777), made on the basis of engineering analysis from 15.08.2014
Military Reviewin Yandex News
Military Reviewin Google News
42 comments
Information
Dear reader, to leave comments on the publication, you must sign in.