Indonesia to build amphibious transport docks for the Philippines

January 13 2014
3
According to Philippine media reports, the Indonesian state shipbuilding association PT PAL Indonesia (Persero) was recognized as the winner in the tender for the construction of two amphibious transport-docks for the Philippine Navy under the Strategic Sealift Vessel (SSV) program. An official notice was given to the Indonesian company at the end of December 2013, as announced on January 9, 2014 by the Deputy Minister of Defense of the Philippines Fernando Manyalo. Both ships should be included in the Philippine fleet in 2016 year.


PT PAL Indonesia (Persero) offered for a Philippine tender a ship project, which is essentially a reduced modification of the Makassar-type DTD under construction for the Indonesian Navy under the project of the South Korean corporation Daewoo Shipbuilding & Marine Engineering (DSME). The Indonesian proposal is worth PLP 3,864 billion (about $ 87 million). The winning design of the ship has a total displacement of about 7000 tons, a maximum length of 123 m and a width of 21,8 m. The power plant includes two B&W 9L38 / 32A medium-speed diesel engines with a capacity of 3000 hp each, providing a speed of up to 16 knots. The ship has a dock chamber for basing two LCU-23M landing boats, a cargo hold and is capable of carrying up to 520 airborne troops and 2800 tons of cargo. The flight deck has two landing pads for Sikorsky UH-60 class helicopters, and one such helicopter is located in the hangar in the superstructure. The armament of the ship, according to the requirements of the Philippine Navy, should include one medium-caliber universal artillery mount and two 30-mm artillery mounts.

Initially, according to the proposals of 2009, the Philippine Navy planned to acquire one large (MRV) and two smaller (SSV) landing craft docks, but for financial reasons by the end of 2011 the program was "shrunk" to two SSV ships. At the same time, and in the subsequent, the funds planned for the allocation of the program were reduced from 5 to 4 billion Philippine pesos. In total, nine companies presented their proposals in the Philippine tender for the construction of two DTD SSVs - the Philippine Propmech Corp. and Stone of David Tactical Equipment, a consortium of Filipino companies Astartez Defense and Rescue Solution and Coastal Industries Pse, Keppel Philippines Marine Inc, a Keppel Marine in Singapore, South Korean STX Offshore Shipbuilding and DSME, Indonesian PT PAL Indonesia (Persero) and PT Citra Shipyard, and Indian Larsen & Toubro. The final shortlist included DSME and PT PAL Indonesia (Persero) - that is, the choice was essentially made between two variations of the same basic South Korean project. 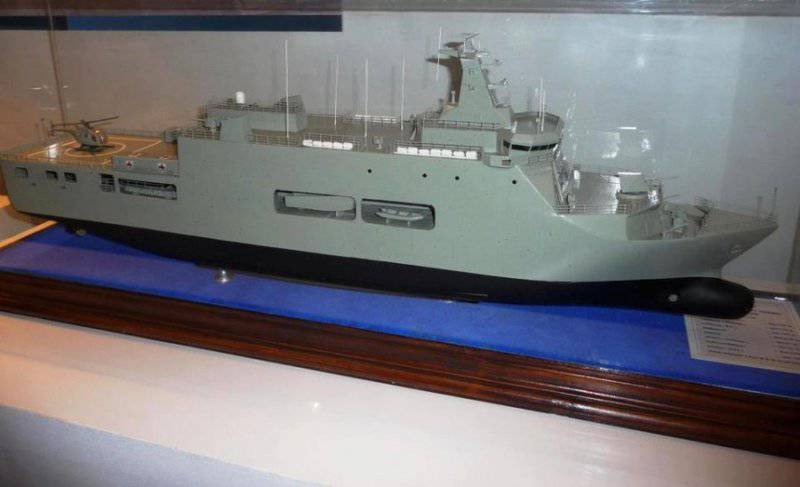 The project of the amphibious transport dock of the Indonesian state shipbuilding association PT PAL Indonesia (Persero), selected in the tender for the construction of two ships for the Philippine Navy under the program Strategic Sealift Vessel. 2012 image of the year (SSV) (c) www.facebook.com

Ctrl Enter
Noticed oshЫbku Highlight text and press. Ctrl + Enter
We are
In Indonesia for the Philippine Navy a dock ship was launchedThe global crisis and the “yellow threat” led to the arms race of the countries of the Asia-Pacific Region. Part of 2
Military Reviewin Yandex News
Military Reviewin Google News
3 comments
Information
Dear reader, to leave comments on the publication, you must sign in.