Before his death, Kalashnikov wrote a penitential letter to the patriarch 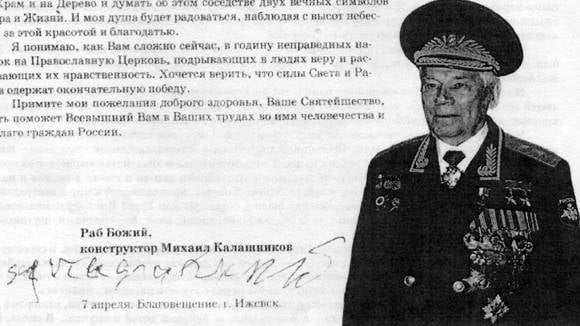 Legendary weapons the designer and creator of the AK-47 assault rifle, Mikhail Timofeevich Kalashnikov, who died on December 23, 2013, six months before his death wrote to the Patriarch of Moscow and All Russia Kirill a penitent letter (available to Izvestia). In it, the designer shares with the head of the Russian Orthodox Church spiritual feelings and doubts about his responsibility for the deaths of people killed from the machine gun that he created.

“My heartache is unbearable, one and the same unsolvable question: if my machine gun deprived people of life, so I, Mikhail Kalashnikov, ninety-three years old, the son of a peasant, a Christian and an Orthodox believer, is guilty of people’s death, let even an enemy? ”Kalashnikov asks the patriarch.

Also in the letter he shares his thoughts about the fate of the country and humanity.

“Yes, the number of temples and monasteries in our land is increasing, but evil does not diminish anyway! .. Good and evil live, coexist, fight and, what is most terrible, humble themselves in people's souls - that's what I came to at sunset his earthly life. It turns out some kind of perpetual motion machine, which I wanted to invent when I was young. Light and shadow, good and evil - the two opposites of a single whole, not able to exist without each other? And did the Almighty really arrange it all? And mankind to live forever in this ratio? ”- asks the designer.

Kalashnikov assigns a special role in improving the affairs of the Russian Orthodox Church, which, according to him, “brings to the world the sacred values ​​of kindness and mercy”:

“And the Lord has advised me to approach in the declining years with the help of my friends to the holy sacraments of Christ, to confess and to partake of the Body and Blood of Christ.”

Kalashnikov also reminds that instead of the museum named after him in Izhevsk was built St. Michael's Cathedral.

“When in 91 a year ago I crossed the threshold of the Temple, there was excitement and feeling in my soul ... it was as if I was already here ... Such a feeling is given, probably, only to a baptized person. How well, the thought flashed through my mind that I refused to build a museum of my name at this place, ”Kalashnikov shares his impressions.

Kalashnikov recalls with special warmth that he planted a sapling of Siberian cedar near this temple, brought from his homeland - from the village of Kurya, Altai Territory.

“People will look at the Temple and the Tree and think about this neighborhood of two eternal symbols of Goodness and Life. And my soul will rejoice, watching from the heights of the heavens for this beauty and grace, ”wrote Kalashnikov.

He wishes the Patriarch “good health” and the help of the Most High “in his writings in the name of mankind and for the good of the citizens of Russia.”

“I trust in your sinful thoughts, on your pastoral word and your shrewd wisdom. I look and listen to your sermons and answers to the letters of the laity, whose souls are in everyday turmoil. You help the Word of God to many people, people really need spiritual support, ”Kalashnikov said in a letter.

A spokesman for Patriarch Kirill, Alexander Volkov, told Izvestia that the Patriarch received a letter from Kalashnikov, and even wrote a reply.

- This letter was very relevant during attacks on the Church. The patriarch thanked the legendary designer for his attention and position and replied that Mikhail Timofeevich was an example of patriotism and the right attitude to the country, - said Volkov.

He added that regarding the responsibility of the machine gun designer for the deaths of the Church, the Church has a very definite position: when weapons serve to protect the Fatherland, the Church supports both its creators and the military who use it.

“He invented this automat to protect his country, and not to be used by the terrorists of Saudi Arabia,” Volkov explained.

The document, dated April 7, a copy of which is at the disposal of Izvestia, contains two pages of typewritten text and a handwritten signature of the designer himself.

The daughter of the designer, Elena Kalashnikova, believes that her father could write such a large and responsible text with the help of Father Victor, the priest of the Mikhailovsky Cathedral, mentioned in the letter.

“Last years I was preparing his letters, but I have no relation to this letter,” Elena Mikhailovna explained to Izvestia.

She also urged not to relate to the change of belief of Mikhail Timofeevich too categorically.

- Of course, one cannot say that he went to the services and lived strictly according to the commandments. You have to understand what generation it was. After all, you can talk about faith in God, but not to believe. And you can believe and never say so. Mikhail Timofeevich never laid out what he felt. I remember, in 1999, I brought him a cross, put on, I could say, made him wear, and I said: “Cross over”, and he: “I can't, the hand does not rise,” I just put my hand to my heart, ”Kalashnikov’s daughter recalls.

In addition to the description of spiritual experiences, the letter of the AK-47 creator contains thoughts about the domestic weapons complex, which Kalashnikov himself experienced in 1941 year for weakness.

“How is it that such a power, such a powerful defense industry, such a strong design school, so many wonderful models of weapons were in the reserve, and once on the battlefield, I and my front-line comrades could not defend themselves. We did not have machine guns and machine guns, but the legendary Mosin rifle is one for three, ”Kalashnikov recalls in a letter to the patriarch.

It is noteworthy that Kalashnikov calls his AK-47 machine gun a “miracle weapon” and “the main rival the Americans” as “friends”.

“We always kept up with the times, we were ahead in some ways of our main rival - Americans and at the same time were friends at the human level, although we served different social systems that were irreconcilable in those years,” the designer writes.

The designers and scientists who created the weapon, quite often by the end of life were disappointed in their creations. The creator of the atomic bomb, Robert Oppenheimer, was shocked by the destructive force of the weapons created by him after the bombings of Hiroshima and Nagasaki. He felt guilty and since then actively fought against the use and development of such weapons. In 1954, for opposing the creation of a hydrogen bomb and for using atomic energy only for peaceful purposes, Oppenheimer was removed from all posts related to secret work.

However, not all creators of weapons experienced remorse. The father of the hydrogen bomb, Andrei Sakharov, until the end of his life considered his work to create it right and useful.

“Sakharov, until the end of his days, believed that a situation in which a super-weapon was concentrated in one hand was fraught with great danger. And in this statement, regardless of whether it is right or wrong, there is not a grain of anti-Americanism or xenophobia, but only scientific analysis, free from any ideological or national prejudices ... - wrote Sergey Kovalev - I don’t think he was afraid of the unprovoked nuclear aggression by the US; but he believed that in the absence of a nuclear equilibrium, the danger of the emergence of an “ordinary” war, which inevitably escalates into the Third World War, increases many times over. That is, he considered his work on the hydrogen bomb as a means of preventing a global catastrophe (“AD Sakharov: Responsibility to the Mind.” - Izvestia. May 21, 1998). 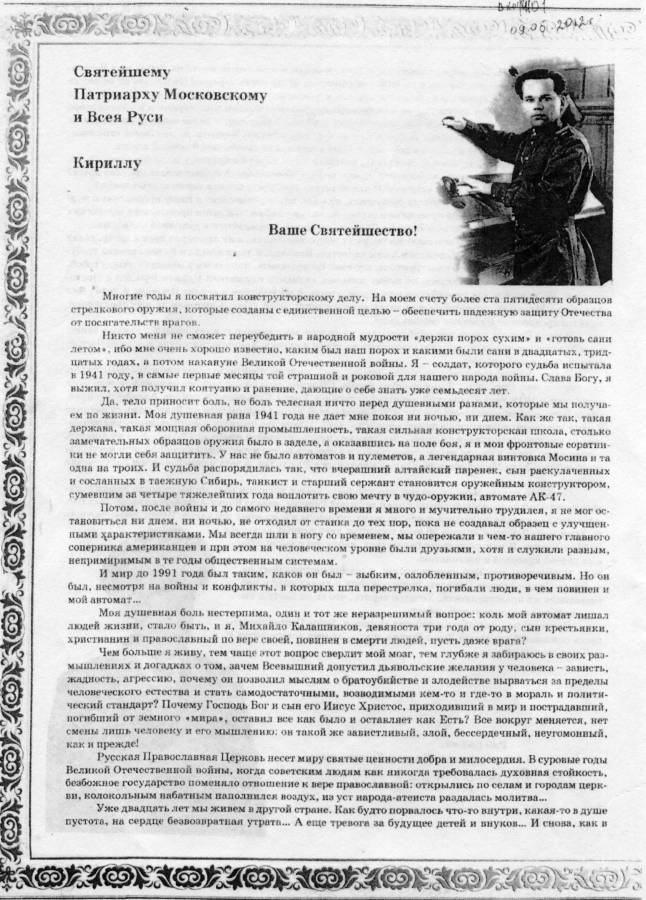 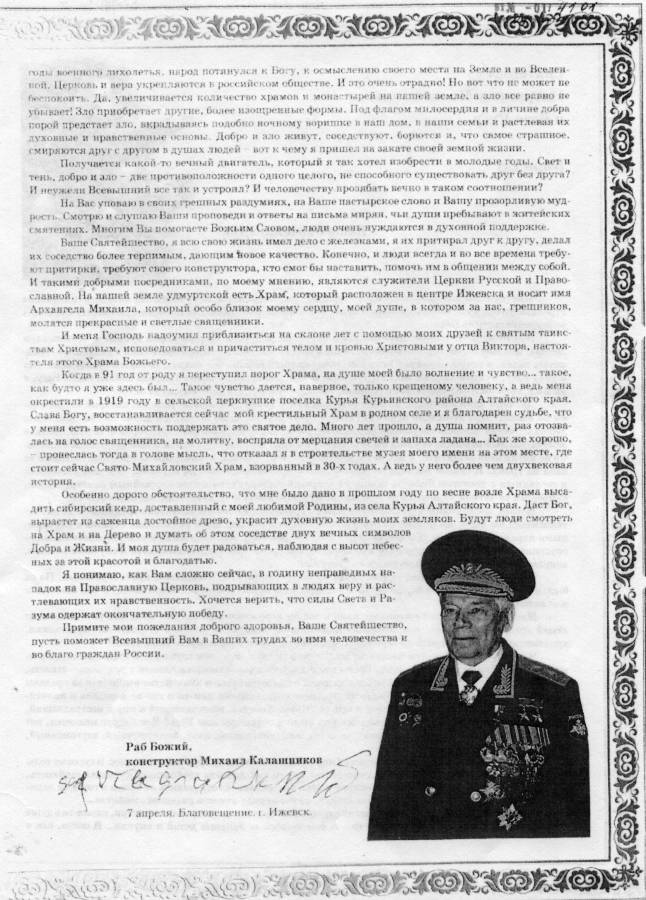 Ctrl Enter
Noticed oshЫbku Highlight text and press. Ctrl + Enter
We are
Religion then and now. Double pressureReligious conflict in Abkhazia? It is possible
Military Reviewin Yandex News
Military Reviewin Google News
219 comments
Information
Dear reader, to leave comments on the publication, you must sign in.