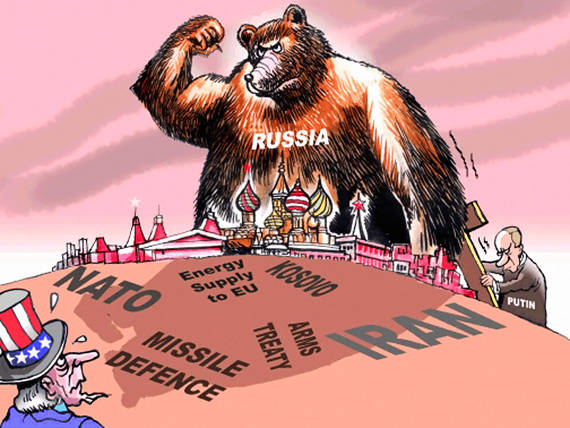 The New Year with the world press alarming enthusiastically undertook to consider Russia's achievements. Why it - is understandable. There was an opportunity to put on top of a string of successes big black spot. Double attack in Volgograd.


Outside the context of settling accounts with Vladimir Putin for the experienced humiliation of the Volgograd tragedy, it seems that no one at all considered. What are there Russian! What a sacrifice! The main thing is that at the end of the year, Akela missed. It is just amazing what a rise of the spirit can cause one major terrorist attack. Theorists of all calibers from the sofa to the salon came to life and crawled into the light to speculate about "how fragile were the scenery for the play about the Russian miracle."

First - finally Russian someone poked his muzzle in the dirt, but it went too well.

“The return of big terror to Russia is staining the year, which in all other respects was brilliant in favor of Putin’s“ man of the year ”. He outwitted the US in Syria, bribed Ukraine to push it away from the EU, turned himself in the eyes of many of the first human rights violator into a stubborn advocate of the activist Snowden, released political prisoners from prisons who are no longer seen as a threat to his rule, and generally led Russia to the position of geopolitical influence, which it has not occupied since the collapse of the USSR ”- the Americans list in The Daily Beast (audience - 15 million).

“Putin humiliated the United States, giving asylum to an informant and former US intelligence officer Edward Snowden, offered a solution to the Syrian issue, preventing the seemingly inevitable American military strike on Syria, outwitted the EU in the fight for Ukraine, surprised the world by pardoning its old enemy Mikhail Khodorkovsky and amnesty for Greenpeace activists and Pussy Riot. However, the year of triumph is complete, and dark clouds have already begun to thicken over Putin, ”Swiss Tagesanzeiger predicts.

The second the topic is a classic rite about the harsh domestic policy of the dictator Vlad Putin, which, although ineffective, does not stop the terrorists, but keeps him on the throne, and now he has an occasion to stifle freedom of speech, etc. etc. By the way, thanks to the general use of demospics, any anti-terrorism measures, such as “mass arrests and searches” in Volgograd, are perceived by readers as an almost punitive act of intimidation towards the residents of the city. It is they, and not the explosions darkened the holidays.

"Huge security measures have been taken to protect Sochi from attacks." (Here comes the Imperial march from Star Wars) "They include Internet tracking technology like the American PRISM, only more powerful, as if inflated with steroids, and still unmanned aircraft, intelligence robots and legions of intelligence and police personnel" - The Daily Beast. All of this is being rebuked by Vlad Putin - after all, he will certainly take advantage of the situation in his dictatorial interests, but the terrorists will still seep into the Games due to rampant corruption in the ranks of the police and intelligence.

“Against the background of the side effects of the ongoing US war on terror, like the NSA and Guantanamo, Western countries will not be able to accuse Putin of violating their powers,” the Berliner Zeitung sadly states

“Putin, who wanted to turn Sochi into a showcase of his power, received a real challenge. Obviously, rampant repression does not solve the problem, but Putin does not seem to be ready to look for another way, ”picks up El Pais.

By the way, the first reports of repression are already coming. They hide from us here, and the Western world knows the truth. Activist Olga Noskovets (do not ask who it is) was forced to write a whole statement to the police that “during the Olympics, she undertakes to express her citizenship exclusively by legal means”. The public is indignant.

The third the theme is anticipation. Achilles found a vulnerable spot, and now many are waiting for repeated strikes at the same point. Russia was reminded that 14 years passed from the president’s promise to dunk the terrorists in the toilet, and now there, Russia is “still vulnerable to terror” (the wording is interesting. About the time difference between September 11 and the blast of the Boston marathon did not remember no one).

On the other hand, every second wrote about Doku Umarov, stressing that the bombings in Volgograd were clearly intended to “attract world attention to the fate of the Chechen people” and were made in line with Umarov's calls to disrupt the Olympics spread via the Internet last summer. Experts in voice warns that the attacks may be a prelude to the whole campaign of terror on the part of his followers.

The Times especially relishes this topic, where even not future terrorist attacks are discussed in two columns, which will certainly occur, and what follows them is future raids, persecutions and general repression of Caucasians who do not want to assimilate. “Putin instinctively will demand revenge for Volgograd, but only with revenge it is impossible to solve the Chechen problem,” the British wrote. “His response will be the armed raids on militant shelters, and the raids on communities in the Caucasus, especially in Dagestan, will almost certainly become tougher - and the police with the military will not be too picky about who to aim at. Putin's revenge will be a dish that will be served cold and tough. " The fact that ethnic Chechens were not seen among the perpetrators of the terrorist attacks for a long time was of no interest to the authors.

El Mundo leads the same way: “The response to the attacks is always the same: hunting for Caucasians, raids on official or private mosques throughout the country, restriction of freedoms and tougher security measures, more or less effective.”

In short, we are predicting a rise in the number of terrorist attacks and a wave of retaliatory terror by the state with the apparent prospect of a new round of violence.

There is fun. Since Akela missed suddenly, all the “experts”, and not just the smartest, got out of their cracks to voice their hypotheses. As a result, the creation of the gloomy German genius from the Berliner Zeitung was added to the treasury of silly concepts to the notorious “state financing corruption”. It turns out that the terrorist attack is in the mainstream of Putin’s interests, since it is the Kremlin that has long stirred up Russian nationalism and xenophobia towards migrants from the Caucasus and Central Asia.

Someone, tell the whole Russian nationalists about the Swamp 2 a year ago to the Swamp about this in full.

Well and commentators. They also continue to delight:

“To me, it all looks very suspicious - usually such events are arranged by CIA operatives in order to cause, as they told CNN,“ maximum fear. ” Russia continues to harbor Edward Snowden, and this is not to the liking of the US government. I expect new “terrorist attacks” aimed at undermining the Olympics and putting Russia in a bad light. Unfortunately, real people die in these incidents, but from the point of view of retaliation policy, they are considered minor collateral damage.

This is far from a comprehensive point of view, but it’s almost impossible to find news feeds where it would not be presented in the comments. Yes, they ridicule her, but before there was no trace of such a position. No matter how naive in Russia, Snowden’s revelations about America’s total surveillance of everyone and everything, at home, he had a significant effect.

In general - if the terrorist attack in Volgograd and gave something to the authors of these notes, so it is hope. The sudden and therefore strong hope that the Russian bear, who so suddenly and terribly flooded decent people at the moment when they shared his skin, which it was impossible to stop in the forehead - at the last moment anyone, no matter who, same knife in the back.

It is believed that in vain hope.

Ctrl Enter
Noticed oshЫbku Highlight text and press. Ctrl + Enter
We are
About Stalin and KhrushchevWhat you didn't want to know about England
Military Reviewin Yandex News
Military Reviewin Google News
162 comments
Information
Dear reader, to leave comments on the publication, you must sign in.