January 13 2014
1
The specifics of the Pacific War Theater of World War II led to the widespread dissemination of various amphibious assault weapons. During the war years, the American defense industry created a large number of landing boats, barges, amphibious vehicles, etc. equipment intended for landing manpower and weapons ashore. However, for a number of reasons, the amphibious assaults either did not carry any weapons of their own or were equipped with machine guns. This did not allow to effectively maintain the landing in fire in a number of situations, because of which it was often necessary to resort to the help of naval artillery and aviation. 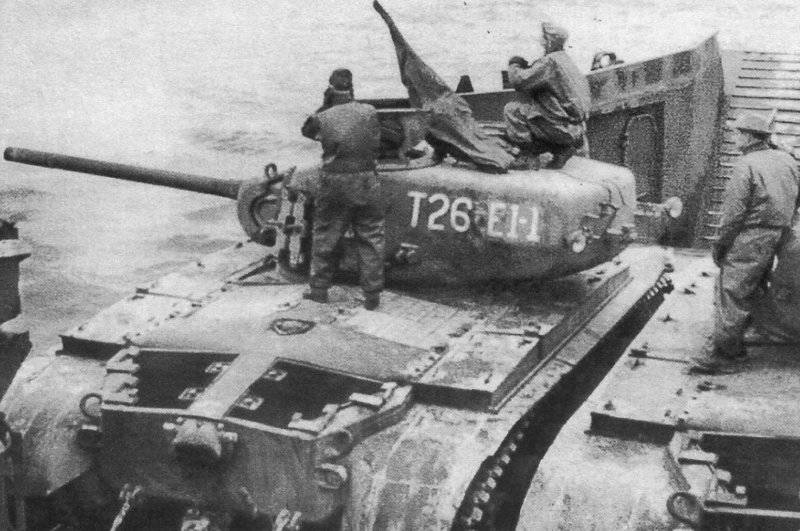 At the end of 1943, the U.S. War Department initiated work to investigate the possibility of increasing the firepower of landing units taking into account the use of available equipment and weapons. Within the framework of this project, it was supposed to work out several transportation options tanks and artillery guns that would allow firing before landing. It was understood that a tank or cannon would be able to fire along the way to the shore, while aboard a landing boat. After landing, transported equipment or weapons could engage in battle on land.

Tests of combined assault fire support systems started in January 1944, and continued until April. The Chesapeake Bay has become a testing ground for test and test shooting. For several months of testing, the US military and engineers had time to check a huge number of combinations of airborne weapons and weapons or equipment. Various aspects of such decisions were investigated: the basic possibility of transporting a specific armored vehicle or gun on a particular barge or amphibian, its installation features, fire efficiency, ammunition consumption, usability, etc. In particular, it turned out that the floating DUKW cannot serve as a base for mortars or guns of a caliber larger than 75-81 mm, and the design of most landing craft and barges significantly reduces the possible horizontal guidance angles of the transported gun. 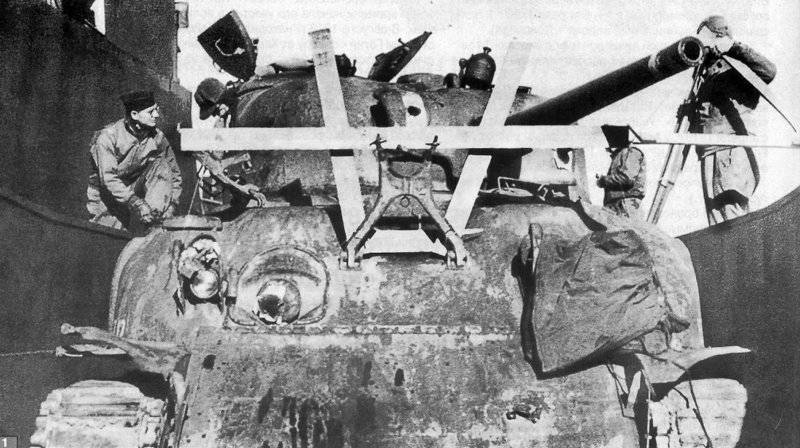 Preparing the M4 for shooting from the landing barge LCM-6. On the frontal armor set the rotation limiter

The joint use of LCM-6 boats and M4 Sherman tanks was one of the most successful combinations of landing craft and equipment / weapons. The dimensions of the boat and tank were such that the latter could fire on the front ramp. In order to avoid damage to the design of the boat, the tank was equipped with a special angle limiter, assembled from several wooden or metal beams. The design of the characteristic form did not allow the gun to be lowered below the permissible limit to prevent damage to the ramp, and also limited the horizontal corners so that the boat with the tank did not turn over due to recoil.

The T34 Calliope, equipped with a multiple rocket launcher, could not fire a cannon. However, the high height of the missile launcher made it possible to shoot over the ramp without the risk of damaging it. It should be noted, firing rockets was associated with some problems caused by the emission of hot gases in the direction of the stern of the boat. 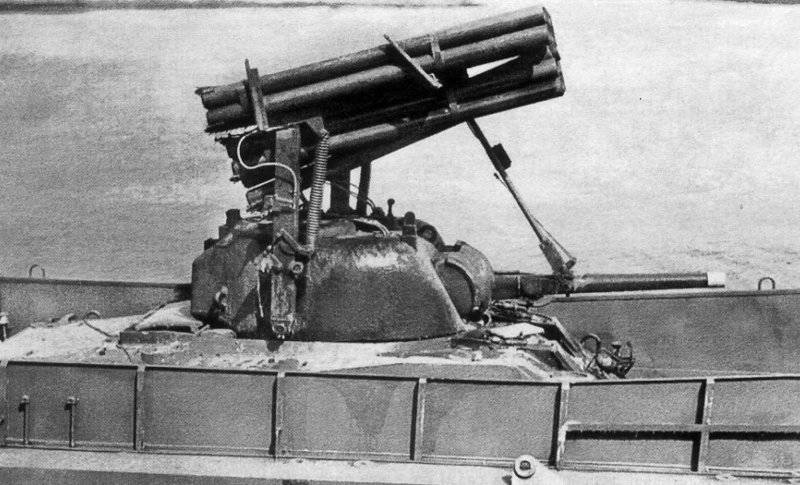 Another interesting load option for the LCM-6 was the combination of a tank and artillery. On the deck of these boats were placed two light tanks of the M3 Stuart family, for example, the M5A1. Because of their height, these armored vehicles could not shoot forward, because they were hampered by the front ramp. However, they could attack targets located in wide side sectors. For bombardment of targets inaccessible to the tank, the landing craft in a similar configuration received two 106-mm mortars. In the stern of the boat it was proposed to install two wooden boxes with sand on which the mortar support plate could be placed. Thus, the boat carried two 37 caliber guns, two mortars and several machine guns.

Shooting before disembarking had one not very pleasant consequence, because the tankers were forced to expend portable ammunition and save shells. Such savings affected the effectiveness of the fire, either before going to the shore or after it. For this reason, it was proposed to equip the landing craft with additional boxes for projectiles. In this case, the crew of the boat was supposed to serve ammunition tankers. Due to this, during landing, the laying of the tank remained completely filled, which to some extent facilitated the combat work.

During the tests, several variants of installation on amphibious boats of various guns were tested. Due to the low height of the guns could not fire through the ramp. To solve this problem, one of the boats of the type LCVP was slightly modified. A hole was made in the ramp for the barrel of the M1 X-gun caliber 57 mm, and on the bow of the deck a wooden platform was installed to install the gun itself. It was proposed to mount the gun with a bracing system. Such an installation of 57-mm guns provided sufficiently high combat performance, but significantly hampered the use of the landing craft for its intended purpose. The wooden platform of the “course” gun made it difficult for the soldiers to disembark, and also greatly interfered with the unloading of other guns or light equipment on the deck behind them. The ratio of the advantages and disadvantages of such a method of installing the M1 gun was considered unacceptable for practical use. 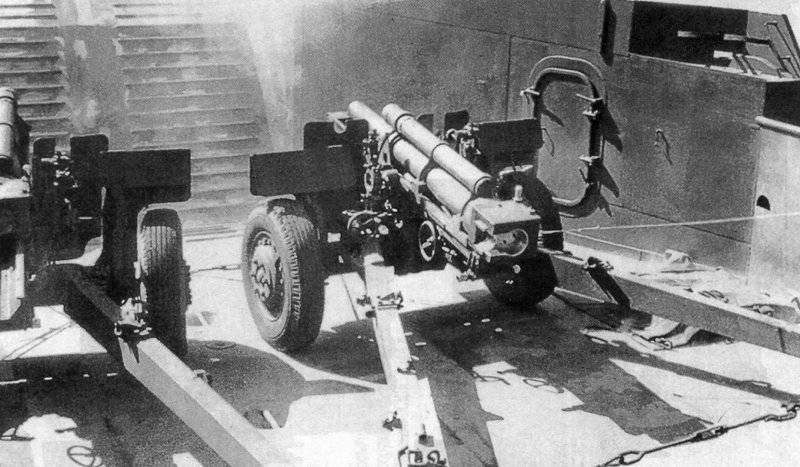 For similar reasons, the military did not approve the project of installing the M115 howitzer on large landing craft. Despite the developed recoil devices, this 203 mm caliber gun had so much impact that the deck of the boat needed to be strengthened with the help of a special wooden construction. The installation of a howitzer on such a platform and dismantling it took up to half an hour, which did not allow for a quick roll-out of the gun to the shore and thus significantly reduced the combat effectiveness of the entire system. In addition, the lengthy dismantling of the M115 howitzer had a negative effect on the capabilities of the landing craft. For these reasons, the M115 howitzer landing craft remained an experimental means of infantry support.

An ambiguous solution was the installation of anti-aircraft guns of caliber 90 and 120 mm on boats of the LCM and LCT families. Some boats could transport up to two such guns in a combat position. The height of the gun carriages of anti-aircraft guns allowed firing in any direction, including through the nasal ramp. However, during the tests, some shortcomings of such a fire support system were identified. When firing in some directions, the shock wave propagating from the muzzle of the gun, smashed the windows on the vehicle-tractor. The option of separate transportation of tractor and guns was not considered for obvious reasons.

One of the most convenient and promising offers was the transportation of 105-mm towed M2 howitzers. Boats with smaller dimensions could carry one such weapon with the calculation, ammunition and tractor, the larger - two. It was proposed to mount the howitzer or howitzers in the combat position to the boat with braces to the deck of the boat. With proper fixation, they could fire above the nasal ramp with minimal elevation angles. The main drawback of such a means of assault fire assault was the high requirements for mounting guns. If they were placed incorrectly or fastened, there appeared a risk of damage to the ramp by powder gases or even by a projectile.

The test of January-April 1944 of the year was a voluminous report, which described in detail the many options for sharing amphibious boats or amphibious vehicles and various weapons or military equipment. According to some data, the total number of ideas reviewed exceeded several dozen. In addition, the report contained all the information collected on the advantages and disadvantages of one or another of the proposed assault fire support system.

In the spring of 1944, preparations for the opening of a second front in Europe were completed, and therefore the test report was very useful. A number of the ideas mentioned in it were actively used in early June during Operation Overlord. Some proposals of American experts interested allies, resulting in the emergence of similar projects in the UK and Australia. Boats with tanks or artillery pieces were tested in practice during the landing of the forces of the anti-Hitler coalition in Normandy. Later, the tested and tested systems were actively used during the landing of assault forces on the Pacific theater of military operations. 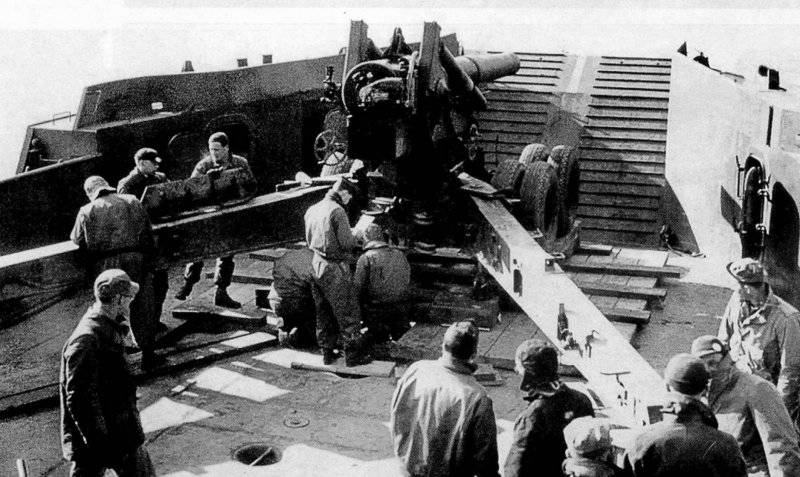 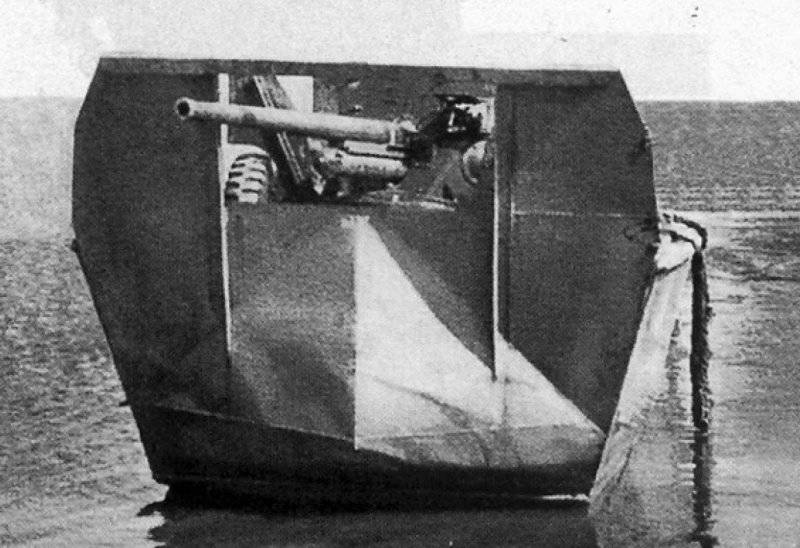 57-mm gun M1 installed in the port, cut into the ramp of the barge LCVP

Ctrl Enter
Noticed oshЫbku Highlight text and press. Ctrl + Enter
We are
The cruisers of the 68 bis project: the Sverdlov missions in the post-war fleet of the USSR. 3 partFeatures of the combat use of torpedo boats on the Black Sea
Military Reviewin Yandex News
Military Reviewin Google News
1 comment
Information
Dear reader, to leave comments on the publication, you must sign in.