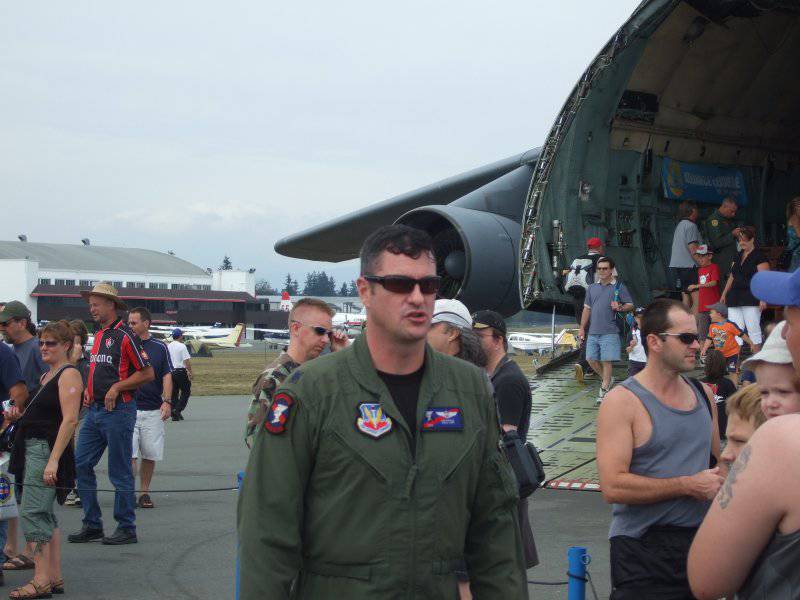 I talked for a long time with the peasant who had flown off almost all his flying life on them. Sobsno flew in the combat unit, was an instructor at the training center, practiced combat use and tactics, participated in writing instructions and manuals ... Iraq-91 missed, and Yugoslavia, too, worked on the methodology in 91, and instructor in 99.

For a start, I asked him about various aspects of stealth - within the limits allowed, of course. In particular, about the cases mentioned earlier, when, allegedly, long-wave air traffic control radars with ease, these planes were seen - at the Paris salon or somewhere else. To which he said that yes, of course, they saw, for this purpose they are installed on airplanes that are not performing a combat mission at the moment, these are the reflectors (as well as to prevent anyone from gaining experience and working out how to detect them in stealth configuration). As for the possibility for an ordinary airfield, a review of the air situation or any other radar to see such an aircraft from any significant distance in the tactical sense, this is, according to him, a complete nonsense - like ordinary aircraft, from ESR to meters or fractions meters, very often they lose, and this one either looks at point-blank, or from the field of fairy tales ...

In the picture - just such a reflector. 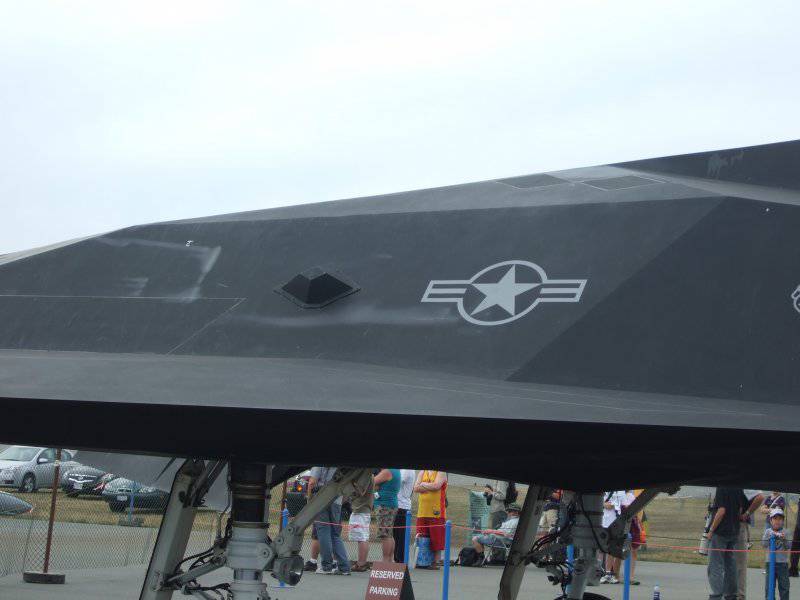 Starting this December, and ending with the next March, ALL F-117 will be removed from service, transferred to reserve, canned, leaving only a few as training ones. In this regard, many restrictions on secrecy, relative to their TTH and LTH are weakened this year. In particular, and restrictions on their flying ability. I asked a peasant about this question - how could it be without this - and his answer surprised me a lot. He said that, in general, its maneuverability and controllability can be roughly compared with the A-10 - it was produced on it and began to fly and therefore is well known. I was surprised - they say, how is it that Thunderbolt, according to those who flew it, can "turn around on the patch", almost around its own axis. He says that they say yes, and this one can. I ask why there was nothing like this on any past air show, but there were simple spans over a strip, sometimes with an unexpressed slide. He says that, they say, before - it was impossible, but this year, for the first and last time - it is possible. Seize the moment

Further conversation showed that everything is not so simple: the tactically important property is not just the ability of the device to spin in the air - these are modern computer EDSUs allow, within the limits of the inaccessible to the person, but also the ability to save energy with such maneuvers. And with this, he seems to be not bad, but very bad: (ATTENTION !!!) while performing COBRA, he loses speed so much that he can recover it only with loss of height. I also clarified whether I had not misheard, what I eloquently looked at the clock and said that the flight through 50 minutes, then later, if you wish, welcome back with questions.

Now, about the flight: first, above the strip at the height of some first hundred meters, it passes VERY quickly! Faster than everyone else who demonstrates there. And it is not very loud and without a jet of fire from a nozzle, like in the F-16 afterburner, say. Such a black arrow ... by the way, on earth its futuristic shape somehow conceals proportions, and it looks like an awkward box with a tail and stumps of wings. In flight, it is clear that it is long and narrow, and even visually some sort of impetuous.

Now about flying: after the first straight pass, he somehow turned around, went through half the lane, after which he did something like a very steep slide, lay at the top almost on his side, turned to 180 degrees and with the loss of height went the other way, where he came from, quickly falling and leaving almost close to the ground, as far as one could see.

On the third pass, he made, if I correctly applied the name, a dead loop at the beginning of the strip, then a completely normal cobra at the end: he lifted his nose vertically, almost without gaining height, and then lowered it and went down.

On the last pass, I first made a quick barrel with a climb, and then such a figure: I started as a dead loop, but at the top point - in the cab-down position - made a half-bar, i.e. turned the cab up, and went in the opposite direction, continuing to gain altitude.

In the course of the show, there was a comment, and then this pilot confirmed in his conversation that this was one of the few examples of successful "black" projects: they were already in service (since the end of the seventies) for a few years, they flew with might and mainstream they didn’t get wind of anything until the second half of the eighties - when they were first in stories flew in the afternoon.

So, by the way, it is not surprising that they are being written off - for airplanes of thirty years, consider, there have been several upgrades.

As examples of modernization: all those who were interested read that all hatches, bolts, and other inhomogeneities of the skin were sealed with a special anti-radar tape before the sorties. So, in fact, they are covered with antiradar mastic, and a tape is pasted on top, which keeps this mastic in place and protects it from external influences. Then this tape is torn off, it leaves pieces on the casing, which the lower ranks are scraped to their original purity with the help of soft plastic spatulas. In the sense, they used to scrub before: now there are mastics that keep themselves - they cover up the heads of bolts and other irregularities that do not need to be opened regularly; let's say those holes into which the reflectors shown above are bolted into. Hatches in some cases, too, cover with mastic, and in some - and the truth tape, but this new tape is well and without a trace comes off. Allegedly, those who rubbed with old mastic / ribbons, understand how great this improvement is. The delay associated with such processing of the aircraft, almost eliminated the possibility of its use twice a night, and with the transition to a new technology, it became possible.

Well, and many other changes and improvements associated with the increase in exploitation of stealth technology.

Now about the stealth characteristics, and in particular, about the plane shot down from Yugoslavia: remember, they wrote stories about the Yugoslav colonel who shot him down, and is still hiding. So, the man claims that he was part of an American group that met him; supposedly, they met officially, organized by the current Serbian authorities, did not feel any bad feelings towards each other - everyone did their job, the Serb did his best this time, a real pro, of a very high class.

Specifically, according to him, the reason that made this possible was political restrictions on the choice of the flight route; the Serbs knew when and where the Americans were flying, well, they organized an ambush. He once again pointed out that stealth is not a panacea, but simply another, albeit extremely essential, tactical advantage, which still needs to be skillfully used, but which can (as we see) also oppose other skills.

When I asked how problematic it was to get into the hands of Serbs (that is, all interested) of aircraft wreckage, he said that, in his opinion, not for how much: critical equipment is destroyed, and stealth technology is a matter of technology, not physics . Physics, according to him, is quite simple behind this matter, and everyone whom it concerns is well known for a long time: it seems like there are many layers of coating of different thickness and with different dielectric properties, where the boundaries work like mirrors that hold the reflected waves in the layer where gradually fade away. But technology and specific parameters are a matter of tremendous time and money - primarily regarding the strength and operational practicality of such coatings.

I asked a question about the EPR of the F-22 compared to the F-117: allegedly, as they say, its EPR is still noticeably smaller. The man chewed (apparently, figuring out what can be said and what is not supposed to), and said that it is mostly secret, but in principle the situation with the Raptor EPR is generally different: it is close to zero at some corners, and noticeably higher than the F-117 - on others. That is, F-117 was initially made with the understanding that he would act alone, in a hostile space, against planes with better speed and other TTX, in conditions of lack of information, and he was also intended to hit critical targets - that is, he will not have the freedom to choose a collision scenario. Therefore, he radar of that time - and most of the current, from real distances - not detected from any direction.

The raptor is made for a different role - it is faster than all modern and prospective opponents (meaning not the maximum, but “tactical” speed and maneuverability - the practical ability to quickly find itself in the right part of the space, approach and break the distance), it is assumed that his pilot, well, the nature of the main objectives is quite different - that is, it is assumed that his pilot will have the freedom to choose the script, enter the battle and exit from it. And this is exactly what makes it possible to realize the advantage of its extremely low ESR (according to him, it can rather be called "the practical absence of EPR" - it happens that the radar does not take it (or the rocket head? - I did not understand this moment) when the distance allows you to shoot from the cannon) at some corners, and reconcile with noticeably higher than that of the F-117 - at others.

I asked the man if he would retrain for F-22 / F-35. He pessimistically answered that most likely he didn’t - maybe he will instruct another year or two, but on the whole he has ahead - piloting the table at the Pentagon. Like, anyway, after five years at the most, seven will be deducted from flight work, and it is very expensive to prepare or retrain pilots, and Uncle Sam prefers to invest in lieutenants rather than colonels for new types. And in general - the number of aircraft in the US Air Force is reduced, and with them the number of flight positions. Therefore, they mainly retain those pilots who still have many years to come. And the number of tables is growing regardless of anything, they are enough for everyone. Yes, besides, according to him, he flew in his life, and would feel bad, taking away this chance from young guys, many of whom he taught himself.

But, in general, it is noticeable that from such conversations the peasant somehow felt sad.

Yes, I forgot to say: according to him, the cancellation of more than 50 F-117 allows the Air Force to purchase an additional six Raptors. When I asked whether one thing was worth the other, he spoke out - or rather, grunted - that it was not up to him to decide, but that six planes could not be in 54 places at the same time, and then, they say, understand it yourself ...