With a nasty "revolution" even a shred of wool 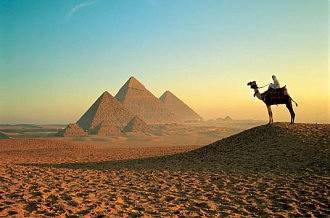 I had the opportunity to spend New Year and Christmas holidays in Egypt, in the resort mecca of the Sinai Peninsula - Sharm el-Sheikh. There was such an opportunity - why refuse? Although many discouraged. Like, where are you going? Look how uneasy it is. Every day something happens.


Egypt, having survived two consecutive "revolutions", which took place according to the general scenario of the "Arab Spring", written far beyond the borders of the state, today is literally in a fever. Thousands of aggressive demonstrations, terrorist attacks, explosions, dozens of dead and wounded.

Already in the new year, January 4, supporters of former President Mursi, who headed the state after the "first" revolution, but was overthrown by the second anti-government coup, took to the streets of Cairo and many large cities of Egypt. There were massive clashes with the police. As a result, 2014 people died in Cairo on the first Friday of 4, only.

However, for the citizens of Ukraine, whose capital is still paralyzed by the so-called Euromaidan, the events in Egypt do not seem to be mysterious. On the contrary, everything is very clear. In Egypt, as in Ukraine, powerful oligarchic clans are fighting for power. It is clear that the authors of “revolutionary” scenarios never speak about their true intentions. But they skillfully use the personal mood of ordinary people, driven to despair by poverty, hopeless everyday life, corruption, judicial arbitrariness, meager wages.

None of the Egyptians, who had a chance to talk with during the trip, said that life after revolutions had become better. For the common man, nothing has changed. Some capitalists were castled on others. Those leaders who are not satisfied with the West, the methods of the "Arab spring" change to a more loyal. And as a man of labor was powerless, so he stayed.

So Egypt has not changed at all over the past few years. I speak of this with skill, since I first visited this country in the already distant 2007 year. No change for the common people - such is the ending of any oligarchic "revolution". In whatever country it takes place.

However, from the "revolutionary" situation in Ukraine was able to extract material benefits. It turned out that the Egyptians are very closely interested in the latest events in our country. Ukraine for them is not only a football player Shevchenko, but also Euromaidan. And we, the Ukrainians, the Egyptians consider their comrades - comrades in the "revolutionary" misfortune.

It turned out in the course of trading with the owner of one of the stores on the “Old Market”, which is the heart of trading in Sharm el-Sheikh. Initially, for the thing chosen by my wife, the Egyptian wanted 10 dollars. Then, having heard that we speak Russian, suggested 7. But not a dollar less. Like, you are from rich Russia, you can pay without bargaining further.

It was then that we said that although we speak Russian, we came from Ukraine. The seller immediately changed the tone. Became sympathetic and helpful. So they usually speak with seriously ill people, fearing words to inflict additional pain on them. The seller sighed and sighed about the Ukrainian Euromaidan, they say, it will not lead to anything good. Here in Egypt there were two "revolutions" - so what?

And as a sign that the Ukrainians and Egyptians are comrades in misfortune, he offered to lower the price for the thing we chose to 4 dollars. Say, to representatives of any other country, he would not make such a discount. And Ukraine is an exception.

Of course, to bargain like that - knocking down the original price by more than 2 times - can be considered lucky. But it was a shame. And it is disgusting for the new international image of our state.

Ctrl Enter
Noticed oshЫbku Highlight text and press. Ctrl + Enter
We are
For a revolution or a counter-revolution? The role of the military in the politics of EgyptEgypt: chaos, confusion, confusion
Military Reviewin Yandex News
Military Reviewin Google News
86 comments
Information
Dear reader, to leave comments on the publication, you must sign in.