Moral distortions: even the fascists saved the civilian population from Bandera? 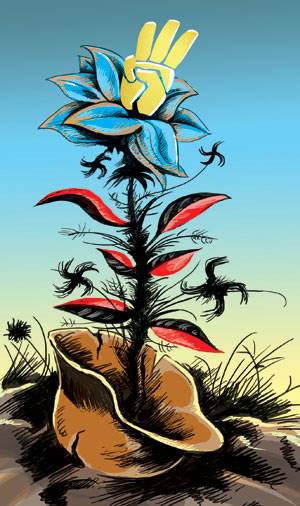 Not so long ago, a film entitled “Our Mothers, Our Fathers” was released in Germany, in which it was shown how the Nazis save a Jewish girl from cruel Ukrainian policemen.


I would not comment on this film if I did not see that Germany, again under different sauces, is not trying to give its assessment of World War II, often showing the fascist army humane.

But against the background of the impulses of neo-Nazis and Ukrainian nationalists to join the Fourth Reich, I think this film is for Bandera and maydantovy to some extent sign. Why do I use the phrase "Fourth Reich"? Because against the background of orange hysteria that Ukraine is not allowed into the EU, I want to remind you that nobody called us there. And the association agreement is a colonial agreement for the marginalized, which, on the one hand, will finish our economy, and on the other hand, will strengthen Germany, which is the EU engine. In addition, the association agreement is the beginning of the end of Ukraine’s sovereignty, since in the near future Ukraine will leave without land, without the famous black soil, which Hitler so dreamed of in the Third Reich.

Let's go back to Bandera. Together with the iconic scene from the above film, it is worth recalling the recent trial of Demjanjuk, which also took place in Germany. For the whole world, Europe showed a Ukrainian collaborator, an accomplice in the killings of the victims of the Nazis. It seems to look like the alarm bell of Europe on neo-Nazism?

At the same time, the Germans called the trial over Demjanjuk the “LAST LARGE PROCESS OVER THE NAZI CRIMINAL” (“Der womöglich letzte große NS-Kriegsverbrecher-Prozess”, Die Zeit). True, I doubt that he is the last. Since the new sprouts have already bred.

But did the EU forget that Bandera, whose heirs stand today on Euromaidan as leaders, destroyed the German fascists only during the Volyn Massacre and after the Great Patriotic War in Western Ukraine about 180 thousands of Soviet citizens?

Did the EU forget what slogans are written by the heirs of the shortages during football matches in the center of Europe? Do not they know that visiting people in Kiev beat peaceful people just because they speak Russian? Forgot that the leaders of the Maidan gave the FIFA assessment, and the stadium in Lviv was disqualified for qualifying matches with the participation of the national team up to and including 2018?

And why is the EU satisfied that one of the national football players, Karpaty, is making a sharp challenge to all the victims of the OUN-UPA warriors? Indeed, after the FIFA reaction, the Natsik out of spite changed the color of the Karpat form. The choice of colors "OUN-UPA" was not accidental. “This is a kind of nod to the colors of the national liberation movement for the freedom of Ukraine, which was led by the Hero of Ukraine Stepan Bandera,” said Daniil Nikulenko, head of the Karpaty FC information center.

The answer is obvious. EU leadership is hypocritical. None of them wants to answer basic questions. Instead of a sharp reaction to the torch processions of neo-Nazis in the center of the capital of Ukraine, the continuous anti-Semitic and racist slogans of the members of the nationalist parliamentary party Svoboda were opposed to the German reaction. An open homosexual who (fu-fu-fu) officially signed with a peasant, he’s the German foreign minister, Guido Westerwelle, came to embrace the leaders of the Maidan and give them moral support on behalf of the EU in general and the Fourth Reich in particular.

"Ukraine should be on board Europe, because we are united by a joint история, shared culture, shared values. We further want to see you as our partners, ”said Westerwelle. I don’t know what kind of partners the German high-ranking homosexual sees Ukrainians (these are already questions to Euromaidan leaders and “free” opposition journalists of the Portnikov level), but didn’t talk about the common history and value system Westerwelle didn’t (or didn’t have) rights!

In response to the statements of Euromaidan leaders that the Ukrainians showed their desire to go to Europe, once again I want to say the following. For understanding. I do not need to go to Europe. I studied in the Soviet school and received a good Soviet education. So, even the one who knew geography for C grade, will tell you: Ukraine is Europe. We are the second after Russia in terms of territory among European countries. If you are talking about "European values" - if you please!

It remains to be fantasized that if the leadership of the EU and the Ukrainian authorities do not care about the hotbed of Nazism and neo-fascism in the center of Europe, then this scum will have to be dealt with by new SMERSH groups and fighters with collaborators from the Mossad?

Ctrl Enter
Noticed oshЫbku Highlight text and press. Ctrl + Enter
We are
A great interview with Sergey Lavrov: about Ukraine, Obama and IranWhat you didn't want to know about England
Military Reviewin Yandex News
Military Reviewin Google News
235 comments
Information
Dear reader, to leave comments on the publication, you must sign in.