January 13 2014
78
In 2014, the rearmament of the army and security forces will continue. Thus, in accordance with the existing agreements, this year the Interior Ministry troops will receive the first batch of new armored vehicles. Eight cars of the Ural-VV model will be transferred to the Ministry of the Interior and after that will go to the appropriate units. 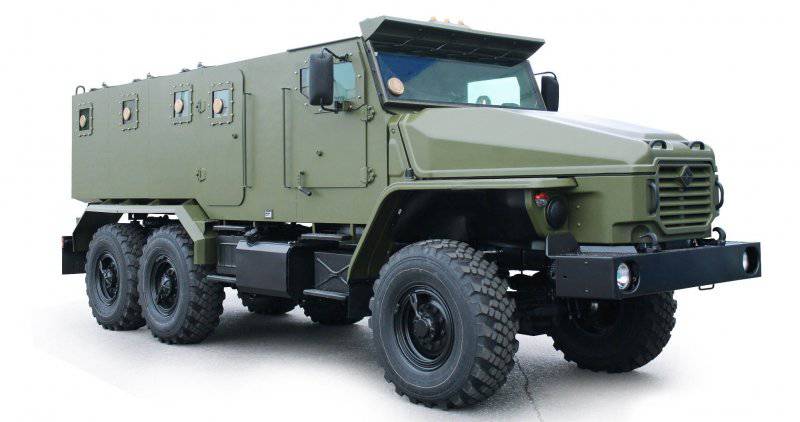 The new model of the armored car was developed by order of the command of the internal troops, which is reflected in the letters “BB” present in the title. According to reports, the customer independently developed the technical requirements for a promising armored car. They take into account the experience of using armored and unprotected vehicles in recent conflicts, the peculiarities of the work of internal troops, etc. In the course of analyzing the capabilities of industry and the realities of combat work, the specialists of the Ministry of Internal Affairs excluded some points from the requirements for the new armored vehicle, and added new ones.

Among other requirements for the Ural-VV car, two of the greatest interest are those related to the layout of the armored hull. Internal troops wished to receive equipment with a single armored corps. In accordance with the technical specifications, the driver’s cab and the troop compartment should be a single volume. The second remarkable requirement is the presence of a large number of hatches. To reduce the time required to leave the car, the customer demanded to equip it with a large number of doors and hatches.

The development of an armored vehicle for the new model was entrusted to the Ural Automobile Plant (Miass) and the Moscow Research Institute of Steel. The first company was responsible for the creation of the chassis and the corresponding units, the second - for the armored body. For the first time the armored car "Ural-VV" was shown in September last year, at the Russian Arms Expo-2013 exhibition in Nizhny Tagil. The demonstration of the first copy and the publication of some of the data about it allow us to form an opinion about the promising armored vehicle.

The Ural-4320 truck was chosen as the basis for the Ural-VV armored car. It was in serial production and proved to be a good vehicle of its class. The all-wheel drive three-axle chassis is equipped with a JMZ-536 diesel engine with a capacity of about 310 hp. Such an engine and chassis are said to provide high performance both on the highway and on rough terrain.

The armored hull of the Ural-VV is assembled from metal sheets of various thickness and is able to protect the crew from bullets and fragments, as well as from mines and improvised explosive devices. The frontal parts of the hull and glass provide protection at the level of 6 class by domestic standards, the sides - 5 class. The engine compartment has its own armored housing, providing protection for the 3 class. Declared protection of the crew from the explosion of two kilograms of TNT. An interesting feature of the new armored vehicle is the additional splinter protection of the engine and gearbox placed under them. Experience in operating various classes of technology has shown the need for such parts. 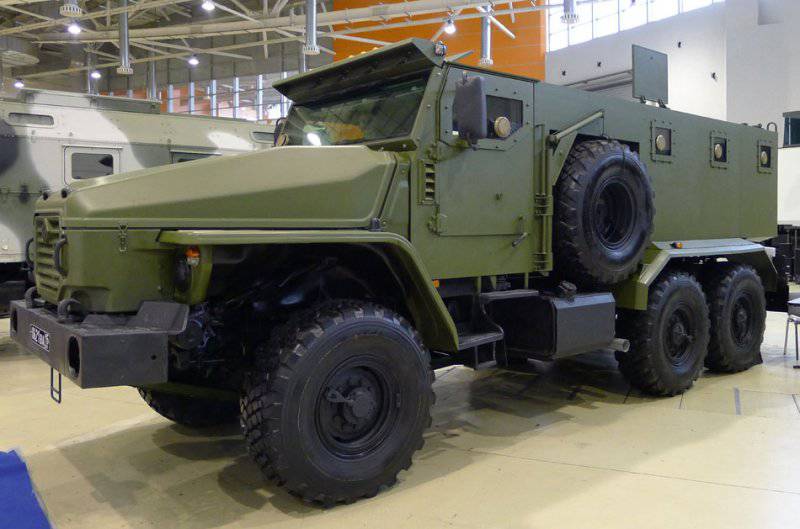 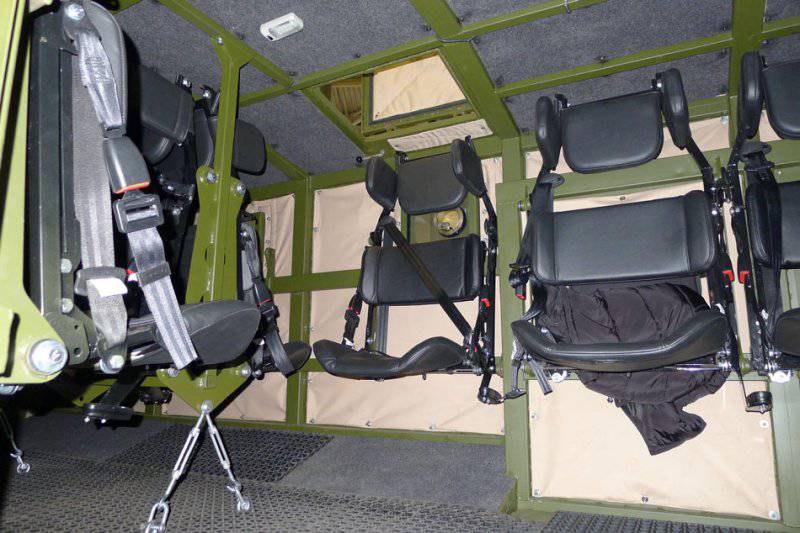 For landing and leaving the car has several doors. Two are located in the front of the habitable volume, one on the right side, and in the stern sheet there is a wide double door. For convenience, the rear doors are equipped with a folding ladder with a pneumatic cylinder. If necessary, it can be lowered manually. The bulky cargo-and-passenger compartment allows the Ural-BB armored car to transport up to 17 people, including the driver (according to other sources, only 13 seats). The fighters are placed on the seats installed along the sides. According to some data, no seats were installed on the armored car on display in Nizhny Tagil, absorbing some of the energy of the explosion of mines. Perhaps in the future, the armored car will receive similar equipment.

When developing a new armored car, not only the requirements regarding the driving characteristics or the level of protection were taken into account. To create comfortable conditions, the habitable volume of the Ural-VV car is equipped with an air-conditioning system, a heater and a number of other equipment affecting the convenience of being in an armored car. It should be noted that these devices are standard.

The armored car "Ural-VV" does not have its own weapons, but if necessary, the crew can fire from personal weapons through the loopholes. On all glasses there is one such device. Acceptable firing angles, apparently, allow you to attack targets in any direction.

Until the end of the current 2014, internal troops will receive eight Ural-VV armored cars. It is expected that the new equipment will arrive in some parts, where it will partially replace the unprotected trucks and armored personnel carriers existing there. Armored vehicles ordered by the Ministry of the Interior have an interesting legal feature that will facilitate its operation. Unlike armored personnel carriers and other vehicles of several classes, the armored vehicles "Ural-VV" or similar vehicles are full participants in traffic and therefore can independently and without any escort move along the roads, which can significantly accelerate the transfer of personnel.