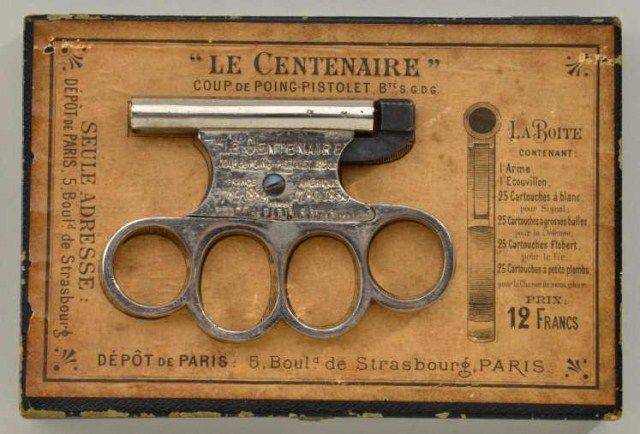 The great French revolution not only brought the spirit of democracy. In the wake of violence and unrest, street gangs, the so-called Apaches, appeared. They were christened after one of the Indian tribes for cruelty. Ordinary citizens were forced to defend themselves independently, since the state at that time could not ensure their safety. It is at this time that various things appear. weapon self-defense as part of the Belle Epoque phenomenon (beautiful era). 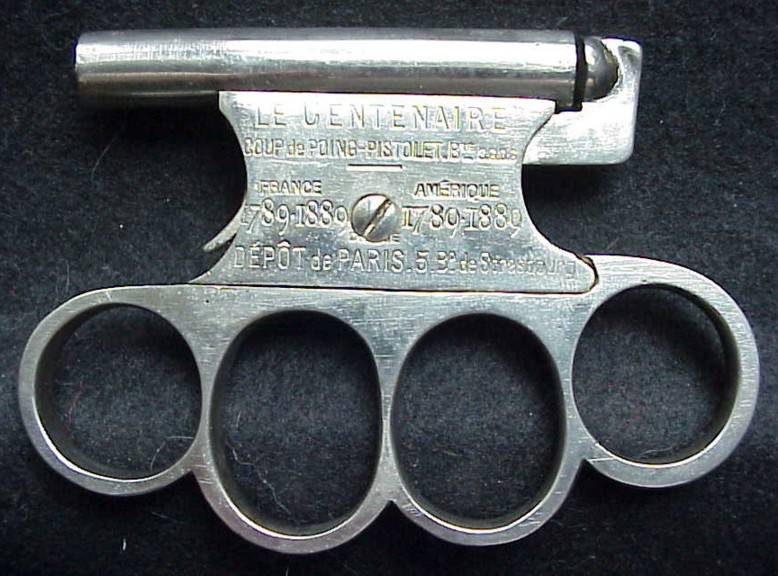 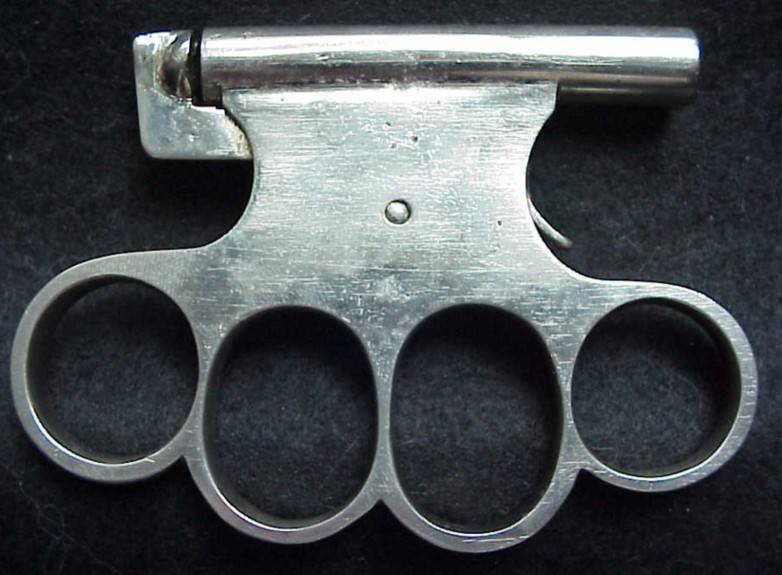 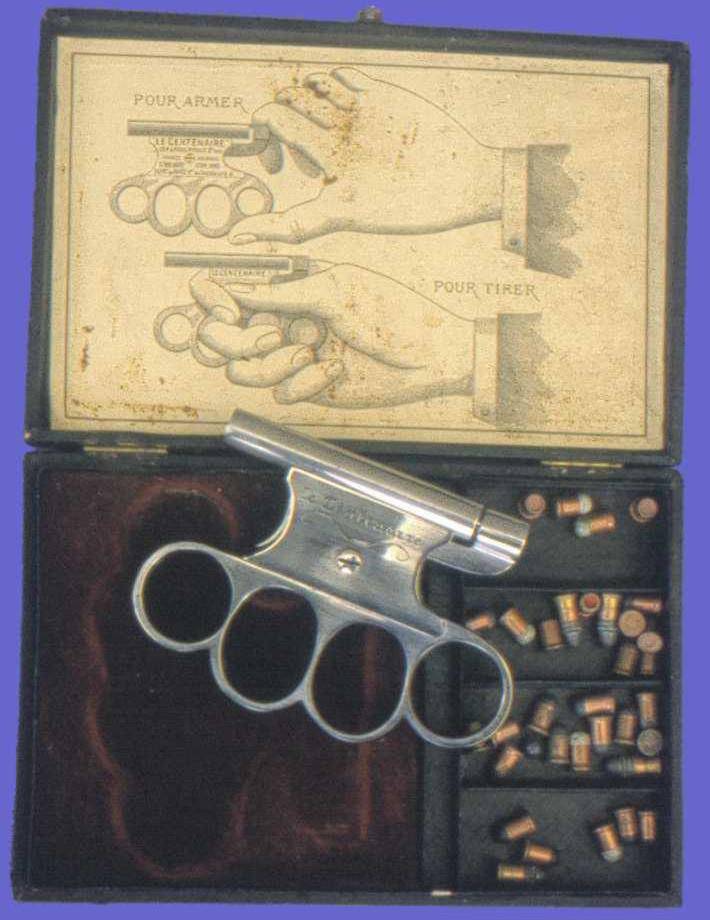 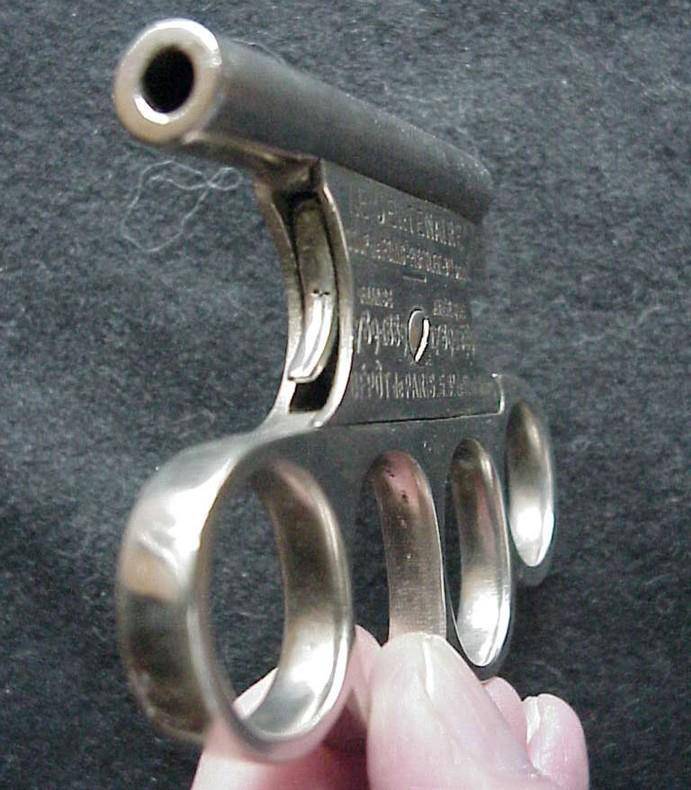 The barrel has a length of 68 mm, smooth, without rifling. The barrel is a hollow tube designed to accommodate 22 caliber cartridges. 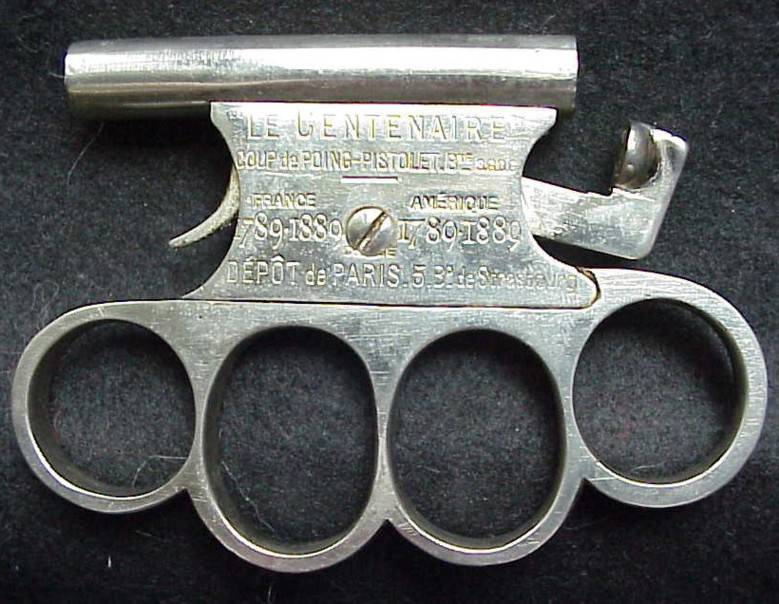 The shutter, as a separate part, is simply absent. Its function is performed by a spring-loaded drummer, which has a rounded shape. He locks the barrel during a shot. 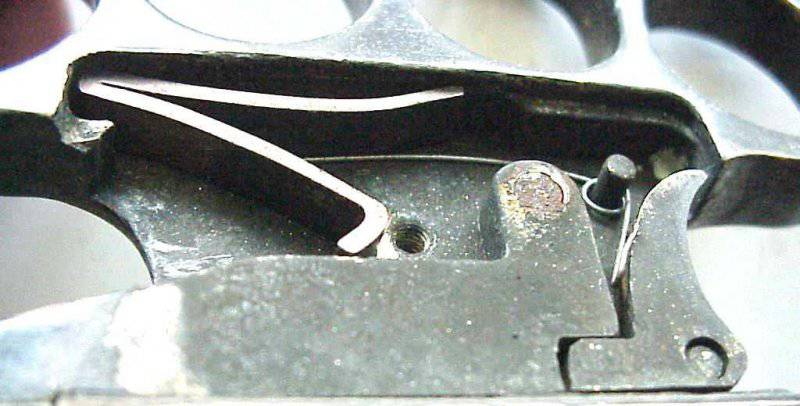 The trigger mechanism is closed by a removable lid and consists of a trigger (drummer), a trigger with a spring, and a combat spring. Like many other combined weapons, pistol-brass knuckles do not have a fuse. For firing it was necessary to pull the trigger by the head, while the trigger became a combat platoon. With the trigger cocked, the trigger protruded from its slot. After placing the cartridge in the barrel chamber, the weapon was ready for shooting. After the shot, the extraction of the spent cartridge was carried out using any rod of the diameter or the brush that came with it. The Le Centenaire brass knuckles have a total length of 105 mm, height 70 mm, weight 150 grams. 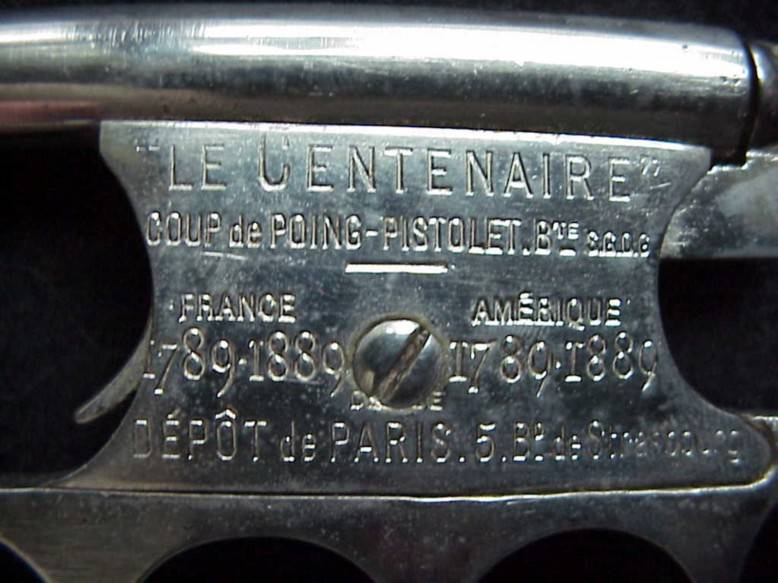 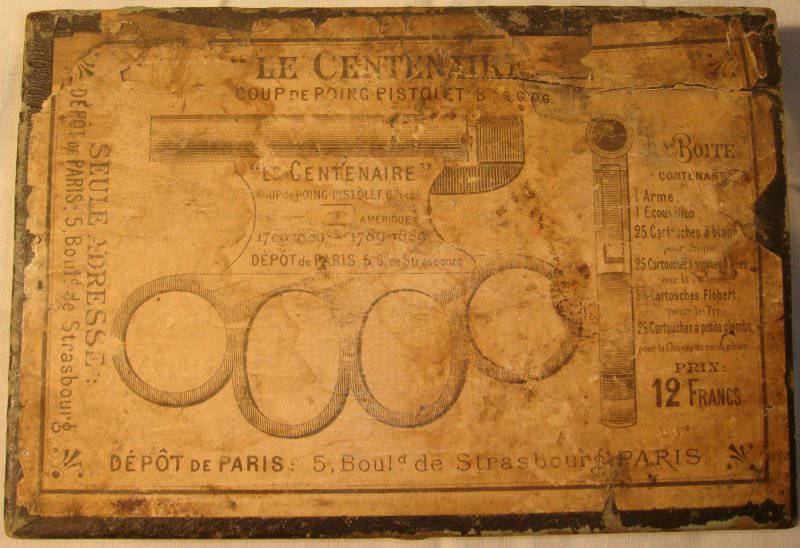 Similar inscriptions are also on the cover of the original weapon box. The gun-brass knuckles were completed with a box covered with leather on the outside and inside with a velvet or corduroy inside. The box had a brief illustrated instruction on the use of weapons, compartments for storing cartridges and a brush for cleaning the barrel.

Despite the fact that the brass knuckle is single-shot, the gun in combination with brass knuckles becomes a rather formidable weapon. 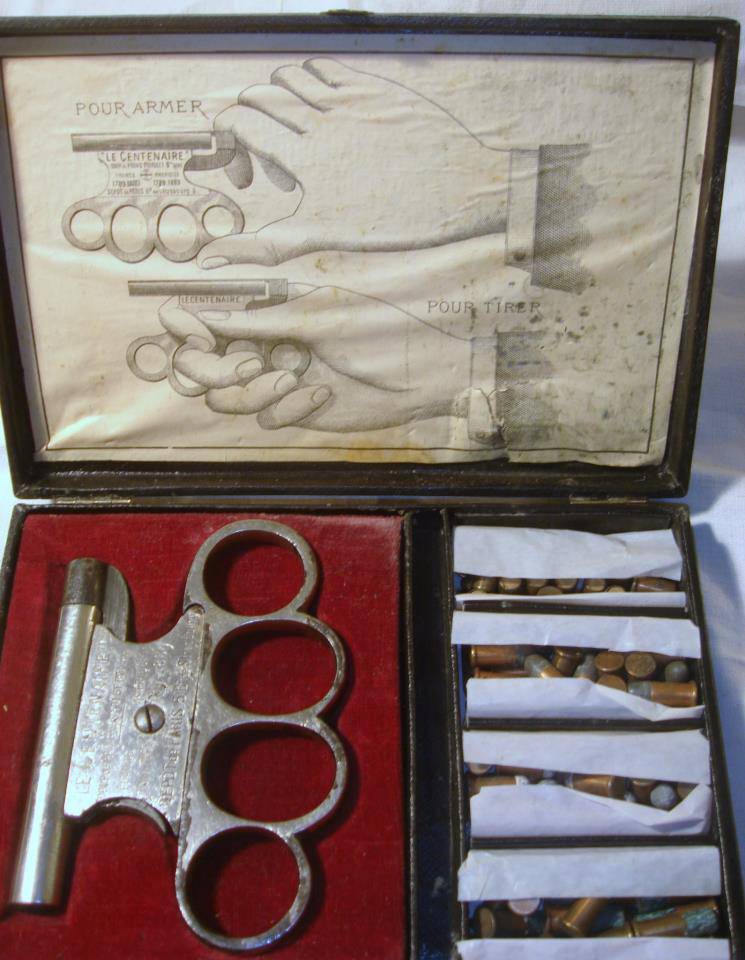 Pistol Le Centenaire (Pistol - knuckle duster Le Centenaire) is in demand among collectors, as a very unusual combined weapon. In good condition and in the original box, its value reaches approximately 1600 dollars. 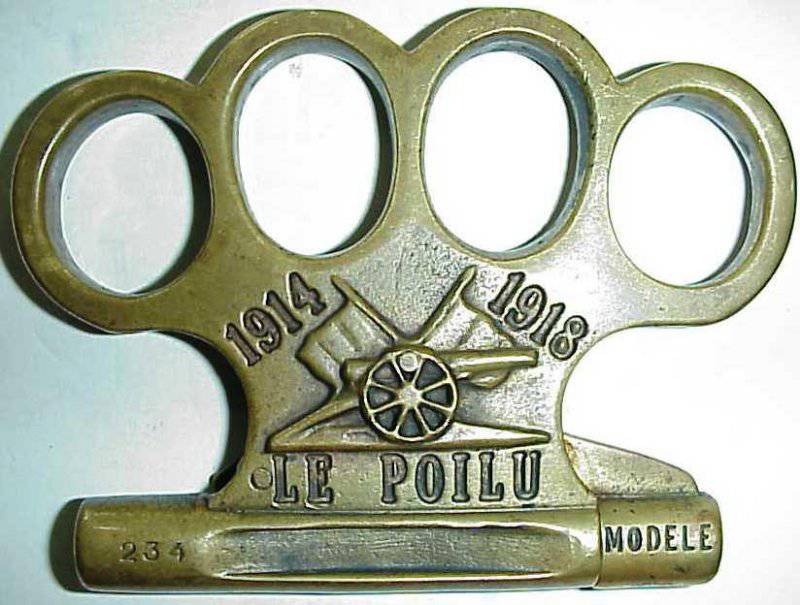 Forty years later, thanks to its popularity, the brass pistol was revived again, made of brass. 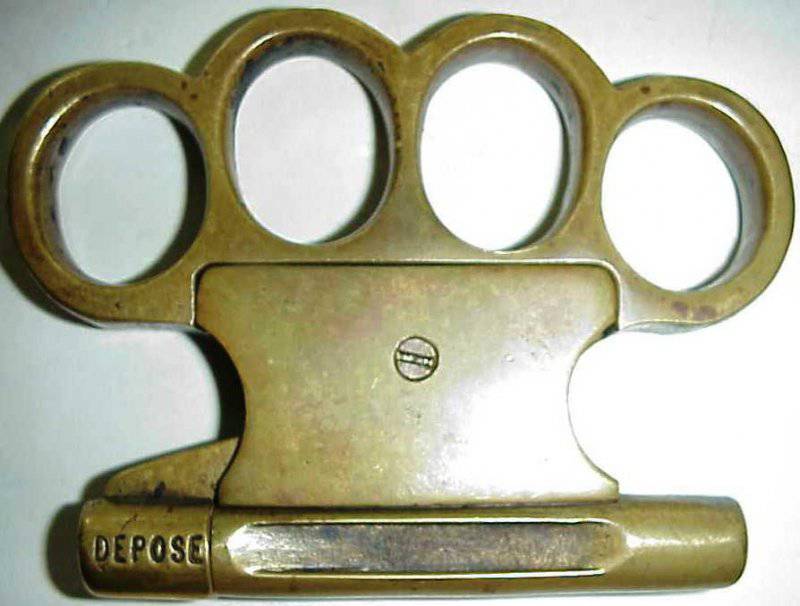 On the front surface of the drummer there was an inscription “MODELE”, on its reverse side “DEPOSE”. 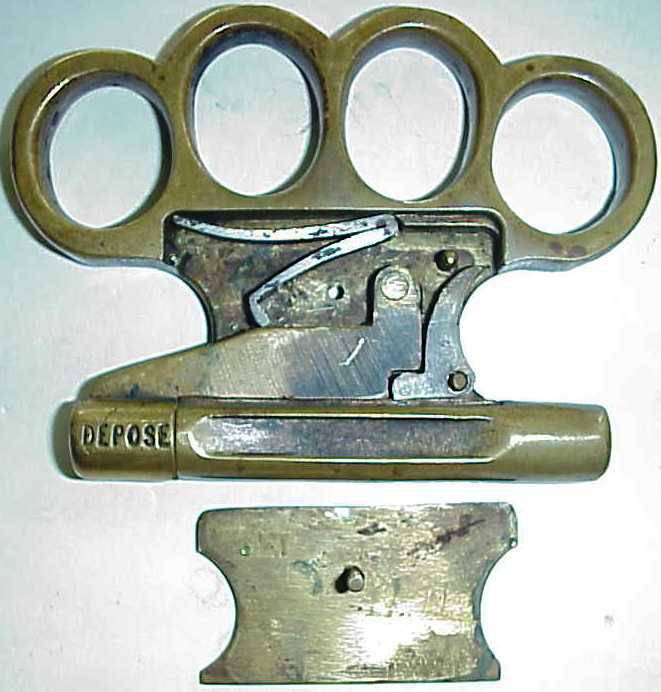 The Le Poilu brass knuckles have almost the same construction as Le Centenaire, only the shape of the drummer and the overall geometry of the weapon differ only slightly.