January 10 2014
17
In the late sixties, the Soviet army adopted the first domestic main battle tank T-64A. Having established the production of this armored vehicle, the defense industry started creating new projects. The new program was supposed to create a main tank, which will be adopted in the eighties. Several leading enterprises of the industry were involved in the development of promising technology: the Leningrad Kirovsky Plant (LKZ), the Kharkov Engineering Design Bureau and the Chelyabinsk Tractor Plant. In the early seventies, the designers of the three organizations completed work on their projects. 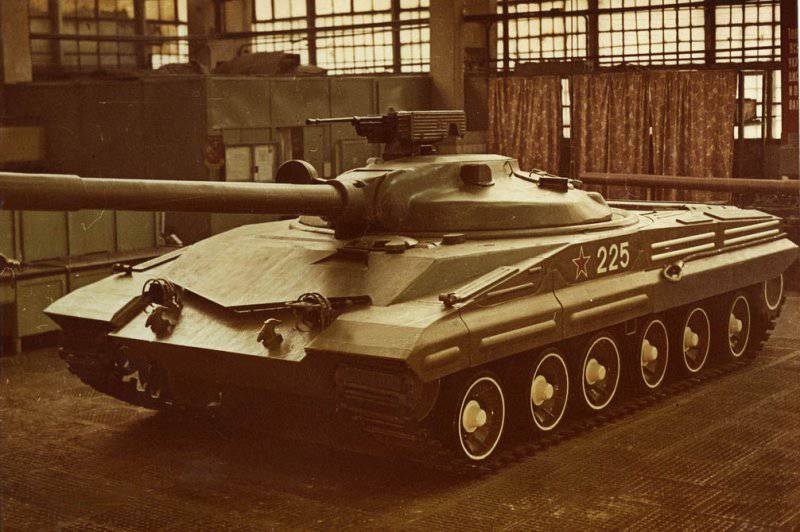 Leningrad engineers led by N.S. Popov immediately created two promising projects tanks: “Object 225” (not to be confused with the 1941 project, also known as KV-5) and “Object 226”. They differed from each other in some design features and the composition of the units. It was assumed that in the future there will be a comparison of prototype machines, which will determine the best project and continue its refinement. We decided similarly to do with weapons and a power plant. As the main weapons 125 and 130 mm caliber guns were considered, and a diesel or gas turbine engine could be located in the engine compartment of the tank.

In November, 1971, at a meeting with the Deputy Minister of Defense Industry, E.P. Shkurko chief designer N.S. Popov introduced the first version of the 225 Object project. By this time, the main features of the appearance of a promising combat vehicle were identified, which later did not undergo significant changes.

Tank "Object 225" was an armored vehicle with a combat mass at the level of 41-42 tons. The layout of internal volumes was standard for domestic tank building: the control compartment in the front of the hull, the fighting compartment in the middle, and it was proposed to place the engine and transmission units in the stern. The armored hull of the advanced 225 Object tank should have a relatively high level of protection. In the front of it, we provided for a combined armor with a total thickness of up to 550-600 mm. The hull sides are 70 mm. The maximum thickness of the tower armor reached 550 mm.

The project “Object 225” provided for the use of the VTDT-1000T engine that had not yet been developed by that time. All units of the combat vehicle were created taking into account the use of a gas turbine engine with a heat exchanger. At rated power of the HP 1000 power plant. power density of the combat vehicle exceeded 23 hp per ton, which promised good performance. According to calculations, on the highway the tank “Object 225” could reach speeds of up to 70 km / h. Inside and outside the armored hull, the prospective tank had several fuel tanks that could hold up to 2 tons of fuel, which ensured a cruising range of up to 600 kilometers. 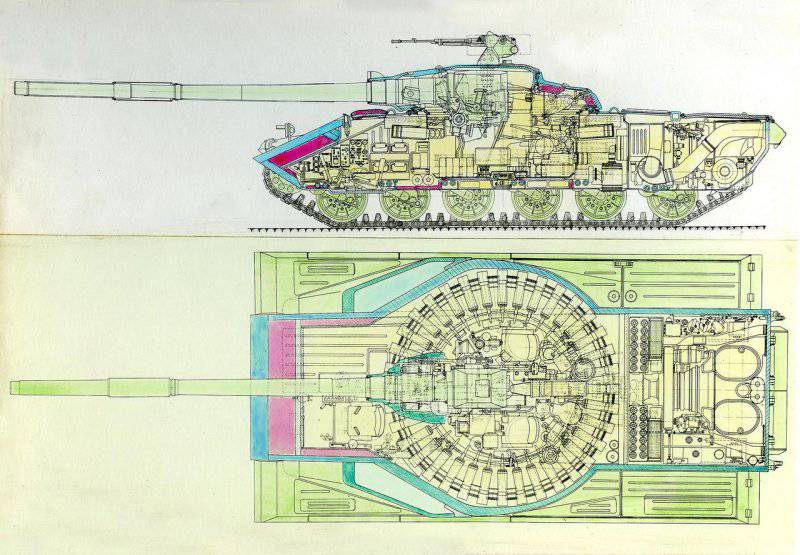 The tracked undercarriage of the 225 Object was supposed to have six road wheels on each side, as well as a front guide and rear drive wheel. Some parts of the chassis, including balancers and track fingers, were proposed to be made of titanium.

In the turret of the tank "Object 225" was to be placed gun, loading mechanism and jobs gunner and commander. Depending on the results of future tests, the prospective tank could get an X-NUMX-mm smoothbore gun, the D-125T, or an 89-mm rifled LP-130B gun. The smooth-bore gun was developed by the artillery design bureau of Uralmashzavod (now “Plant # XXUMX”) under the supervision of F.F. Petrova. Creation of a rifled gun engaged in the artillery design bureau staff of the Perm Machine-Building Plant. The main designer of the LP-36В gun was Yu.N. Kalachnikov. Since 9, at a meeting dedicated to the development of a promising main tank, two projects of tank guns began to be considered.

As follows from the available materials, the automatic loading of the tank “Object 225” was supposed to be performed according to the carousel with a rotating conveyor. Since the workplaces of the commander and the gunner were shifted as much as possible downward, the conveyor of the automatic loader was placed under the roof of the hull. The transporter of the machine had 36 cells. Another 14 projectiles could be placed in the styling of the fighting compartment and used after the expenditure of ammunition in the machine. 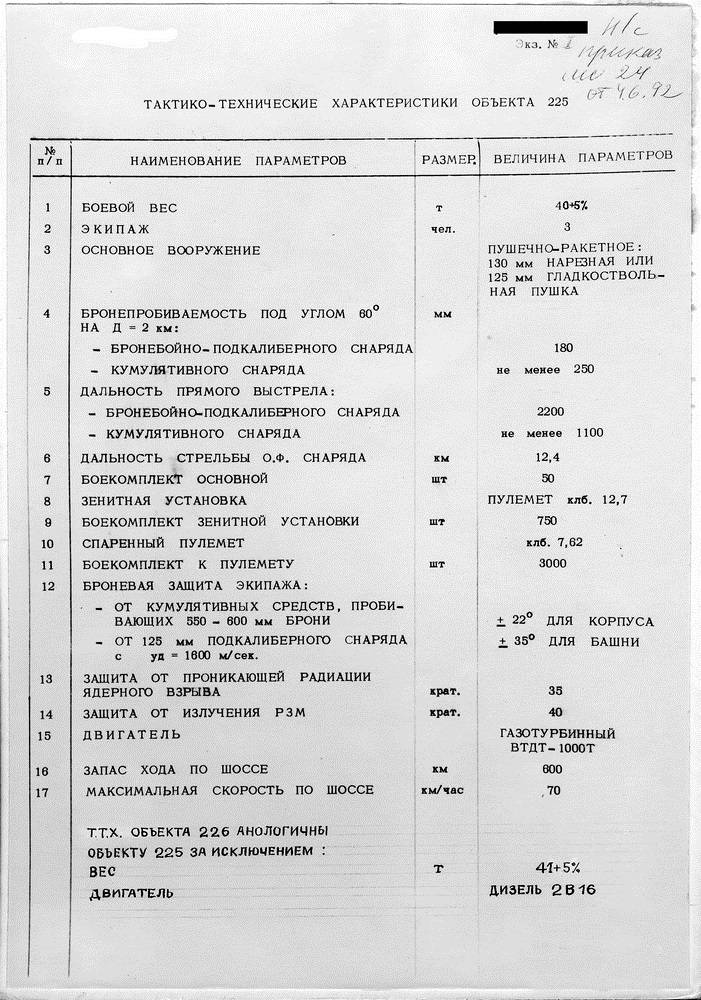 A prospective tank "Object 225" was supposed to hit targets with projectiles of various types, and guided missiles. Since the late sixties, the Gyurza guided weapons complexes (KUV) developed by the Kolomna Engineering Design Bureau and the Kobra developed by the Tochmash design bureau were considered rocket weapons for the tanks under development. At the beginning of 1971, the Gyurza project was closed, although for some time after that, work continued on the creation of a missile system specifically for the 225 Object tank. For searching for targets and aiming weapons it was supposed to use the Morges fire control system with a set of new sights attached to it.

In the tower it was planned to install an 7,62 machine gun of mm caliber with ammunition in 3000 cartridges paired with a cannon. A large-caliber anti-aircraft machine gun and a box of 750 ammunition for it were to be located on the roof of the tower. The possibility of creating a remotely controlled turret for him was considered.

The tank "Object 226", developed simultaneously with the "Object 225", did not differ from him in design, equipment and weapons. All the differences of the projects consisted in the used power plant. The “226 Object” was to receive the 2B16 diesel engine. With similar characteristics, the 226 Object tank was a little heavier than the 225 Object.

Approximately in the first half of 1972, a wooden model of the promising tank “Object 225” was built on the LKZ. Shortly thereafter, both the projects that the Leningrad engineers were working on were closed. Calculations showed that both combat vehicles could not be accepted for service. They had almost no advantages over the existing equipment, but they were significantly more expensive: the cost was affected by the use of titanium parts and a number of new technologies. At the same time, the tanks "Object 225" and "Object 226", according to expert estimates, did not have significant advantages over foreign combat vehicles of the time. Finally, as part of the development program for promising tanks, the Leningrad projects were notably losing to the Kharkov 740 Object.

Both projects created under the direction of N.S. Popov, demanded further refinement. In particular, for an acceptable increase in performance, it was necessary to lighten the tank "Object 225" by about one and a half tons. In the case of a heavier “226 Object” with a diesel engine, even greater reductions in combat weight were required. The relief of both armored vehicles threatened to reduce the level of protection, reduce ammunition, etc. deterioration of various characteristics.

Perhaps the designers of the Leningrad Kirov Plant would continue to improve the projects "Object 225" and "Object 226", but in the early seventies, they were faced with more important tasks. From 1968, the LKZ developed the main tank "Object 219", later adopted for service under the name T-80. Some developments on closed projects were used in the development of new modifications of the “219 Object”. In particular, one of its modernization projects implied the use of the VTDT-1000T gas turbine engine instead of the GTD-1000T gas turbine engine. However, this project was closed due to the lack of advantages over the existing equipment.

Ctrl Enter
Noticed oshЫbku Highlight text and press. Ctrl + Enter
We are
Heavy tanks of the USSR in the postwar periodMBT and their creators
Military Reviewin Yandex News
Military Reviewin Google News
17 comments
Information
Dear reader, to leave comments on the publication, you must sign in.