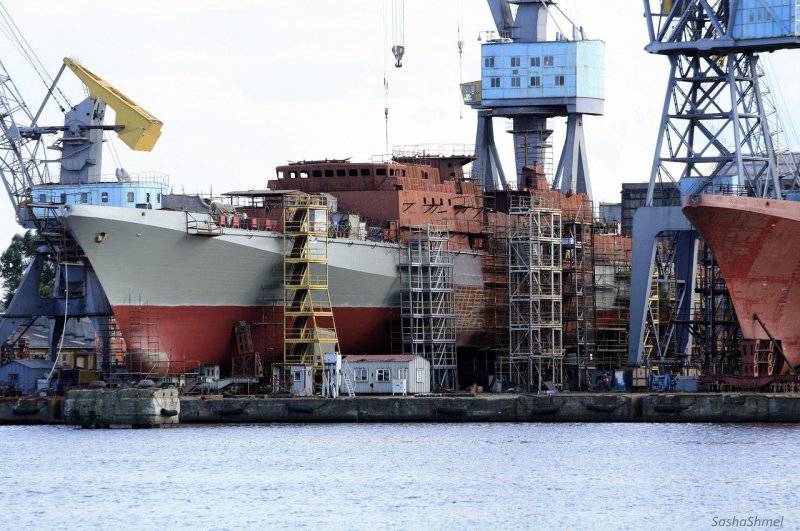 On January 8, the Commander-in-Chief of the Russian Navy, Admiral V. Chirkov, spoke about some plans of the military department concerning the development of military shipbuilding. Among other topics, Admiral Chirkov raised the issue of creating warships of modular architecture. Allegedly, work is already underway in this direction.

Ships made on a modular system have long been interested in the command of the naval fleet. Such a structure will make it possible to build ships of the required type relatively quickly and simply, and if necessary, equip the available with the necessary equipment or weapons. According to the commander-in-chief of the Navy, the design and construction of a modular ship are planned for the coming years. Implementation of this project will be undertaken by a joint working group, which includes representatives of the Navy, the United Shipbuilding Corporation and the Naval Academy.

Admiral V. Chirkov did not disclose the details of the project, but noted that work on the creation of new ships is already underway. In the near future, the modular principle of equipping ships with equipment or weapons will be tested on one of the corvettes with a small displacement. Terms of construction of a new modular corvette or refitting it from the existing ship were not named. It should be noted that last fall the commander-in-chief of the Navy spoke about the possible transfer of the lead modular ship in 2018.

The construction of warships of modular architecture has several advantages over the existing approach to equipping the navy. Such a ship is actually a floating platform, part of the equipment of which can be relatively quickly and simply removed and replaced by another. As a removable modules in the first place are considered various weapons systems and electronic equipment. At the same time, however, the fundamental possibility of implementing more serious projects is not excluded. With appropriate experience and experience, you can create a ship with a modular power plant or hull.

The advantages of ships of modular architecture should also include the economic features of their construction. The lead ship always costs the military more than the serial ones. The modular architecture allows to reduce the cost of development and construction of serial buildings. Mass production of various modules of weapons or equipment can also have a positive effect on the economic part of the project. In addition, we should not forget about the reduction of the construction time of serial ships in comparison with the head ship.

Last year, V. Chirkov told the press about the plans of the navy regarding the tasks and appearance of a promising corvette, which is supposed to be built in the near future. The first modular ship will have a relatively small displacement, and its task will be combat work at a short distance from the coast. As expected, the corvette will be able to carry out air defense and anti-submarine defense, search and install minefields, as well as support airborne troops and ground forces. Such information allows us to roughly represent the appearance of a new ship.

The appearance of projects of ships of modular architecture is waiting for not only the military, but also the industry. Back in the summer of 2012, the statements of the head of the press service of the United Shipbuilding Corporation Alexei Kravchenko were published in the Izvestia edition. According to him, modular technologies will be useful both for shipbuilders and ship repairmen. The main reason for this: the relative ease of installation and replacement of individual modules. One of the most anticipated events is the creation of a modular power plant, the repair of which will not involve the dismantling of the ship’s structural elements.

A. Kravchenko in his interview with 2012 of the year revealed some details of current work. At that time, the shipbuilding industry was exploring the prospects for a modular hull structure. The use of such a technical solution in the future will allow to assemble the ship hull from prefabricated units. For example, it will be possible to relatively quickly and simply equip a ship with an additional section of the hull with weapons or the necessary equipment, placing it between the existing ones. For obvious reasons, the implementation of such projects will not begin soon, but some developments in this area, apparently, already exist.

As follows from the available information, in the future the navy of Russia should receive a relatively large number of ships with a large number of common parts. Arms and electronic equipment, in turn, will be selected in accordance with the tasks assigned to the ship. Under existing conditions, when the Navy needs a large number of new ships, and financial and production capabilities do not allow to quickly build all the necessary equipment, the construction of ships of the modular scheme becomes an interesting and promising undertaking.

For obvious reasons, it is too early to talk about the exact timing of the appearance of the first modular corvette, at which technical solutions will be worked out. According to reports, he will come to the test no earlier than 2017-18 of the year. Thus, the development, construction and start of service of the following ships, built according to a modular scheme, are a matter of even more distant future. Probably, serial corvettes or destroyers will begin service only in the middle of the next decade.

Despite all the advantages, the development and construction of ships of modular architecture is associated with some technical problems. The further fate of the whole direction depends on their successful solution. If an experimental corvette, the construction of which will begin in the near future, does not justify the hopes placed on it, the deadlines for implementing the program for creating ships of a modular scheme will move significantly. In addition, we can not exclude such a scenario, in which the navy completely abandon such plans.

Nevertheless, it is too early to draw any conclusions, since all public information about the plans for building ships of modular architecture is limited to a few general statements by the fleet command and the leadership of the shipbuilding industry. First, wait for the message about the start of construction of the experimental modular corvette.