January 10 2014
12
Events with the hijacking of one aircraft and the fall of another in an area that was not controlled by units of the Soviet Army required an adjustment to the development and adoption of a new system of State radar recognition. In the systems that were developed with my participation and leadership, there were modes of state recognition of aircraft. Apparently this factor was not the last, when the Government suggested that I transfer the affairs of managing the scientific divisions of the Leningrad Research Institute and head the Main Directorate of the Ministry. It was not accepted to refuse in such cases, although I, as a doctor of sciences, were supposed to develop new scientific areas. Now, after adopting the State Identification System, it was required to put all its complexes into production in a short time and equip our Armed Forces and individual mobile civilian objects with this system. The work was ambitious, and when the factories showed successes in the production of the products needed by the Armed Forces, the Government issued a decree on military tests of the system. In these tests, by decree, three military districts, ships of the Black Sea took part fleet и aviation two air armies. 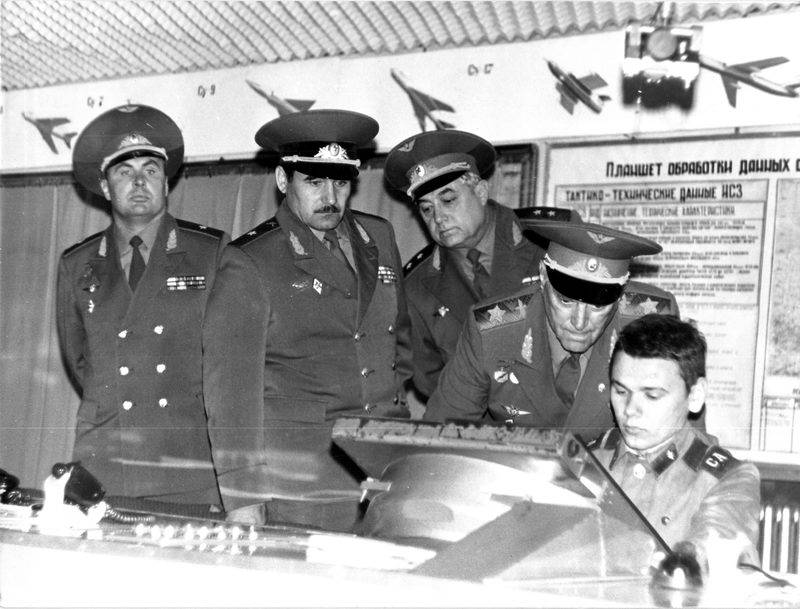 The general leadership of the military trials was entrusted twice to the Hero of the Soviet Union, Marshal of Aviation E.Ya. Savitsky. The resolution determined the working coordinating group, which included the Deputy Commanders of the three military districts, the Deputy Commander of the Black Sea Fleet and the Commanders of the two air armies. From industry, I and the General Designer of the system I.Sh. Bastyukov. But Ildus and I found out about this from our Minister, when I was urgently summoned from a business trip. Bastyukov was already waiting for me at the headquarters. In the office of the Minister, we found Marshal E.Ya. Savitsky and the chief of armament of our army, R.P. Pokrovsky. We have known these leaders from the country's Ministry of Defense for a long time. With E.Ya. I personally met Savitsky back in Kapustin Yar several years ago when I was tested by one of the systems when I worked at the Leningrad Scientific Research Institute. I also knew Roman Petrovich for several years, because through him I had to draw up resolutions on the adoption of the systems that were created by our research institutes. The minister looked at us, and then, smiling, said, “You are at the disposal of the marshal to participate in military trials.” We all understood, and Yevgeny Yakovlevich, having greeted us, asked me to provide him with a list of names of representatives of the enterprises that ensure our work, and not to forget to send the plane to the test. After discussing the details of our work, the Minister summoned the Head of the Department, who handed over to me and Mostiukov new documents for the testing period. Now Mostyukov and I had passports for other names to be able to check-in for flights and hotels. Yevgeny Yakovlevich friendly said goodbye to us before meeting in Odessa.

Troop tests were carried out strictly according to the program. Hundreds of aircraft, dozens of ships, many units of anti-aircraft missile systems and models of armored vehicles were involved. Representatives of the industry stationed in the Odessa Scientific Research Institute "Storm", here are our warehouses and vehicles. The director of the scientific research institute Vadim Mikhailovich Chirkov was transferred into my submission for the period of testing. The AN-26 airplane converted into a cabin for the possibility of departure with a marshal to various airfields in the south of the country was located at the Odessa airport. For the period of testing, I sent a plane with a military crew from the flight unit of my Leningrad Scientific Research Institute. Almost daily, we reported on the positive results of the military tests of this complex system to the Minister for military communication from the headquarters of the Odessa district. Three months passed, during which I only flew twice to Moscow and Leningrad to coordinate the work of my enterprises. From Odessa I was forbidden to do it. But the enterprises worked stably, the managers were professionals, and the deputies knew what had to be done. At the beginning of autumn Odessa became empty, vacationers returned to their work places, the velvet season was over. On one of these evenings, in two cars by E.Ya. Savitsky, who traveled only with his driver, and I returned with Mostyukov from the radar station, which was located in 80 km from the city. Control flights were successful, all targets were identified, blocking on the use of missiles also worked normally. Driving up to the city, the marshal's car slowed down and stopped. Evgeny Yakovlevich went out, I had to stop the car too. I approached Yevgeny Yakovlevich and inquired, “Did something happen?” Suddenly, the marshal said, “I suggest we go to a pub in Odessa tonight for dinner. How do you look at it? ”“ Comrade Marshal, but we did not order dinner, and we do not have security. Everything can happen, ”I began to object. “Yes, come on, Yuri, what can happen. There are few people in the city, but I have long dreamed of visiting such an institution. Do you know any good pubs? ”V.M. Chirkov days ago were in such a beer. Then my wife came to me for one day by permission of the instances, and the director of the scientific research institute gave us a date in a beer house. It was possible to have a decent dinner here, and most importantly listen to the violin. He played on her old Jew, but how he played! He sometimes sang, it was possible to hear them. I confirmed that I know a decent beer. “Then get into my car and go,” the marshal commanded. Bastyukov saw this our conversation, I asked him to follow us. Thank God, we did not have closed documents, so we risked only our heads. We started, at the first intersection, the marshal's car was stopped by a police captain. He gave instructions with a rod to drive up to the sidewalk. The captain went to the car, the department of honor, introduced himself. “Why did we stop, captain?” Yevgeny Yakovlevich asked. Seeing the marshal on the second seat, the captain reported that he wanted to check the documents. “And what to check, you see I am eating,” the marshal reprimanded the captain. "No, no, comrade marshal, the whole city knows that you are here, and we were not given car numbers" - Well, now you will know "- Yevgeny Yakovlevich chuckled. "Let's go," he commanded. The captain saluted, and we started off, after about three minutes we arrived at the diner where the director of the Storm Research Institute had invited me and my wife. There were about ten visitors in the hall, the violinist played something for everyone in the style of klezmer, probably, it was “Lament of Israel”. Suddenly the violinist froze, visitors turned their heads in our direction.

Bastyukov and the marshal sat down at a free table, and I went to the counter, ordered dinner and tea. While we were eating, the violinist continued to play one tune after another in the same style. The violinist and inhabitants of Odessa immediately received E.Ya. Savitsky for his. Once even the visitors began to sing along to the musician in a low voice, this was not there yet. Here, visitors usually drank beer, ate, smoked, spoke loudly, but today these ten visitors are different. Looking at the marshal, they recalled their war years, youth, lost friends and relatives. When the violinist performed songs that Mostiukov did not know, I tried to translate them, Yevgeny Yakovlevich also listened to the translation. While playing the “Bublichki” melody, they noticed to me that they know this song. In time with the music, Yevgeny Yakovlevich and Mastyukov squeezed something on the table with their fingers. The melody “Tumbalaylaka” turned out to be just as fun, which the Marshal and Mostiukov began to sing along with all. Then the cheerful melody was replaced by the lyric romance Ten Drops, which was again asked to be translated. When the marshal was finishing his tea, I went to the bar, settled and offered the violinist to play the tune of the song “Lily Marlene”. This song was sung during the Second World War by soldiers on all fronts. I was told that when a famous German singer arrived in London on 1946 with a concert, she was asked to start her performance with this song. Assuming that Odessans remember this song, I began its performance in English:
Underneath the lantern,
By the barrack gate
Darling I remember
The way you used to wait
Taw's there that you whispered tenderly,
That you love me

Yes, the final was exciting. Visitors began to shake hands with us, asked for something else to perform. Rescued by the marshal, he raised his hand and asked for permission to leave. There was a shout of "Hurray." The violinist played a funny tune about a train that will come to Seven Forty. Two men, holding hands, went to the dance. This has not been in this diner. We climbed the stairs from the basement to the car. And here twenty people were already waiting for the marshal. Everyone began to greet him. Yevgeny Yakovlevich joined his palms, raised his hands up to greet. Then he bowed to everyone and got into the car. When the car door slammed shut, we Mostyukov and we also got into our car. Cars quietly set off. At the headquarters, the marshal came up to me, looked at it for a long time, then hugged and said, “Thank you for an unforgettable evening, Yura. It’s as if I’ve been in youth. ” Days through twenty troop tests completed.

PS In the process of military testing there were other interesting truthful cases. Once we had dinner with the Commander of the Black Sea Fleet of the USSR. A sailor on duty after naval borscht served pasta in a naval manner. Have you ever eaten such pasta so that each macaroni is stuffed with minced meat? In Crimea, there was a radar post on Mount Ai-Petri. Radar screens viewed the entire Black Sea to the shores of Turkey. In any weather, day and night, the command received complete information on the movement of ships and aircraft in this region. And we arrived by helicopter there with a marshal to look at two American ships: a cruiser and a scout. They stood the entire period of military tests in neutral waters, apparently, to analyze the situation and results. It was then that two American ships invaded our territorial waters and were driven into neutral waters by ramming. 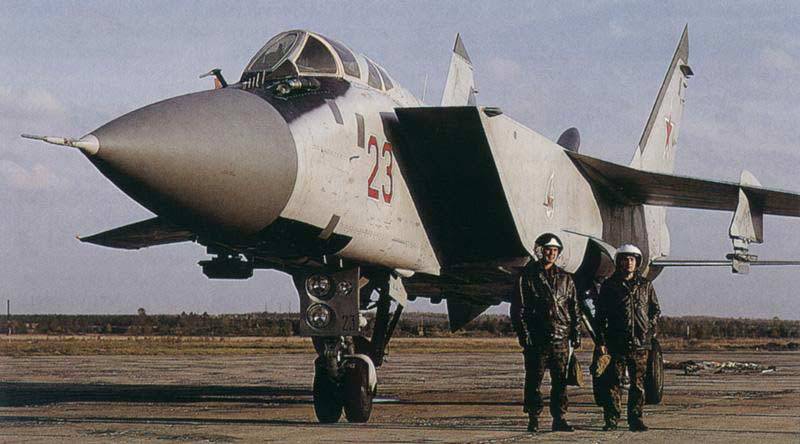 After these tests, I had to meet with a marshal in the Far East. On the MiG-31P aircraft, the equipment of my design for semi-autonomous and group actions of these interceptors was regularly deployed. As a result of thoughtful maneuvers led by the Marshal, US aircraft stopped violating our airspace. On the same plane, the method was introduced and the products were refined according to my copyright certificates, which allowed extending long-range interception by more than 150 km and introducing a group variant of interceptors. The work was carried out at the site of Lake Balkhash. Marshal specially arrived there. This was my last meeting with him.

6 April 1990, students of the Air Force Academies, the Central Office of the Ministry of Defense of the country, specialists of defense ministries said goodbye in the House of the Soviet Army with E.Ya. Savitsky. I came along with our new Minister V.I. Shimko say goodbye to this legendary man.