January 13 2014
114
The fact that in the United States the poor are rapidly continuing to get poorer, a reporter from the channel said in a report recently. "RT" Marina Portnay. In American society, the social abyss continues to grow and deepen. Against the background of the enrichment of millionaires, the working class barely makes ends meet, surviving only thanks to food stamps. The United States, not tired of teaching the whole world how to live correctly, and boasting of its “exclusiveness”, cannot solve the internal problem of total poverty. However, the government is not going to solve it: after all, it will contradict ... the fight against unemployment. 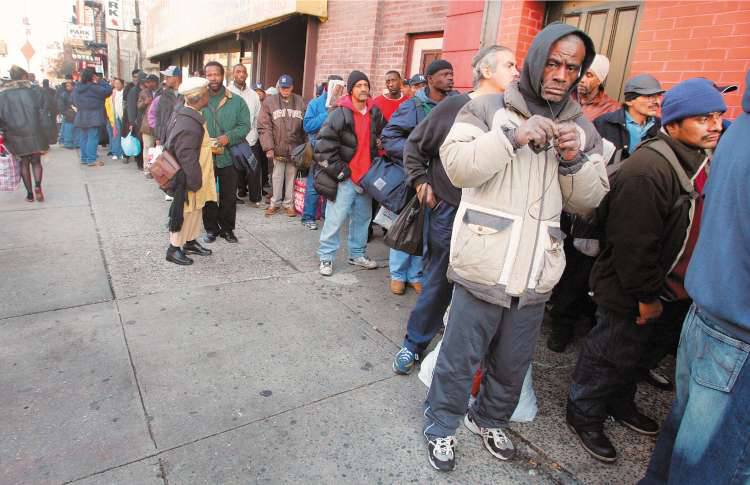 Here is Luis Vázquez, a college student. He is only nineteen, but he is already the main breadwinner in the family. A young man works at McDonalds, earning 7,25 dollars per hour there - apparently, starting money on the way to the American dream. For comparison: the CEO of this company receives more than 13 million dollars a year.

About 99% of employees of fast food - the people who cook and serve customers - live almost in poverty.

A few months ago, the preacher of American uniqueness, Barack Obama, said: “Let us today proclaim that in the richest country in the world, no one who works full-time should live in poverty. I propose to raise the minimum wage on a federal scale to 9 dollars per hour. ”

But nothing has changed from the words of the president. In more than a hundred American cities, fast food workers take to the streets, demanding an increase in the minimum wage equal to 7,25 dollars. You will not live on such money! And the majority of workers have to rely on food stamps from the government.

The lowest wages in the US are in the fast food and retail industry.

The dream of Americans today is not to make a career from a cleaner to the mayor and the president, but ... to be able to pay at least some bills. This is what the same Louis says: “Without a doubt, finding a job is hard. We just want a good salary to feed the family, pay at least some bills and make ends meet. ”

However, the outrage of American fast food workers is not that bad. news.

More in August on the site "BBC" A note appeared on the largest strike of workers of fast food restaurants in dozens of cities in the United States. The participants in the strike advocated that their work be paid at the rate of US $ 15 per hour. The strike took place against the backdrop of calls from Barack Obama and some legislators to raise the minimum wage.

“For an ever-increasing number of people whose labor is paid at the minimum rate, it is becoming less and less possible to climb the next step of the economic ladder,” said then US Secretary of Labor Thomas Perez, one of the main proponents of raising the minimum wage in the presidential administration.

At the end of 2012, the topic of pay in American fast food also did not leave the newspaper pages. On the portal "Vesti - Economy" 16 December 2012 was published an article entitled "US companies are in no hurry to raise the minimum wage."

The material reported that the pay gap in American companies between ordinary employees and managers is constantly increasing, and this differentiation is especially noticeable in fast food. And the point is not that young people work in fast food. On the contrary, the opposite tendency is revealed: older workers are becoming increasingly frequent in fast food, and the share of young people there is declining. If in 2010, the proportion of 16-19-year-old employees was 17% of the total number of employees of fast-food restaurants, in 2000, it was almost 25%. The reduction is evident.

Here is one labor example. 44-year-old Tyree Johnson works for McDonalds 20 for years, and still receives 8,25 dollars per hour: this is the minimum wage in Illinois.

At McDonalds, the pay gap over the past ten years has doubled. It is noted that the company pays for lobbying its interests. And what are these interests? It's simple: you can not allow an increase in the minimum wage. The respective efforts of the unions, visible in Chicago and New York, are also skillfully suppressed.

The catering sector in the United States represents a pattern of classical inequality. The total number of people employed in Wal-Mart Stores, McDonalds and Yum Brands, according to Vesti-Economy, is 2,7 million. Moreover, the net profit of these three companies increased by 22% compared to four years ago.

As for the above crisis, 1,2 million American high-income households increased their incomes by 5,5% (2011 g.), While for 97 million households, incomes shrank by 1,7%. Again, growing inequality: the rich get richer, the poor get poorer, the gap widens.

Do trade unions help workers? Hardly. “The number of people who were fired for joining or trying to organize a union has increased dramatically over the past 30 years,” says Dorothy Sue Cobble, a historian at Rutgers University in New Jersey.

Well, and the lobby, add on my own. Fast food provides rapid growth in employment in the United States, and the president’s statements about raising the minimum salary are just ordinary propaganda, something like Russian and Soviet populism, only in a highly curtailed form. So to say, “minimum program”. In the USA, it is simply not customary to promise each family in an apartment by the year 2000 or communism to 1980. They can promise to increase control over trade weapons, to close the prison in Guantanamo, well, or to raise the "minimum salary" - and it is fine to do without all this, dumping all the political failures on a stubborn Congress.

But is it really so terrible in the USA? Answering this question, one can not do without comparisons.

According to a research consulting company "ConvergEx"In Australia, an employee earns at least 16,88 dollars per hour. In France, the most unlucky workers can count on 12,09 dollars per hour. In New Zealand, proletarians receive no less than 11,18 dollars per hour. Next on the list are: United Kingdom - the “minimum wage” there is equal to 9,83 dollars per hour, Canada - 9,75 dollars, Japan - 8,17. And then, finally, the US - 7,25 dollar. The “top 10” also includes Spain with Greece (5,57 and 5,06 dollars per hour, respectively) and South Korea (4,31 dollars per hour). Thus, the United States is still in the top ten "top" countries in the world for the minimum wage, and not in the last place. This is for objectivity's sake.

But in Brazil, workers can receive at least an hour in the amount of 1,98 dollars. The Chinese can earn at least 80 cents in an hour. India does not value its people at all: there, an employee gets an entire 28 cents per hour of work. In Mexico, the minimum labor hours are rated at 66 cents, in the Philippines - at 61 cents, in Afghanistan - at 57 cents. Finally, in Sierra Leone, the hour of labor brings the worker a whole 3 cent!

It is also necessary to know that even with sufficient incomes, Americans live in debt. To study at a university you need from 5.000 to 35.000 per year, and you will have to give a loan for education. To earn more and not to upset the employer, Americans are trying to rest less. In addition, the rest period is not paid for employees from special funds. The “vacations” of employees are fixed in the labor contract, and on their own initiative, US citizens “idle” no more than 10 days a year, not counting weekends and national holidays.

Now back to fast food. This sector of the American public catering developed during the crisis years (and continues to develop) very quickly, overtaking all other sectors. About this Western media, and Russian, write for the second year. Hence, the permanent employment of those who complain about low wages, but still works: there is simply no other job! The pace of post-crisis recovery in the fast food industry is about twice as high as the average for the United States. Therefore, no trade unions are not afraid of capitalists from McDonald's, who have long preferred to distribute franchises, not only to promote the network for the sake of, but also to have an excuse ready: not adjustable. " And that's it - sorry. To the place of the employee who left or went on strike, those who used to be called strikebreakers and beat them in the face will immediately come. Now the times are not the same, now the former Marxist solidarity is not among the working people. Internationalism is also not the same. Now more and more are remembering the rigorous teaching of Comrade Darwin on the survival of species and intraspecific competition.

Who are these new scabs in the US? This is a kind of Chinese, internal "migrants". Once, the American theorist of liberal democracy F. Fukuyama wrote with displeasure about the “curse of second-rate people” who did not have access to higher education. But it was necessary to talk about people of the third grade, who do not have access even to a full life. And where - in blessed America, from which the whole world should take an example! But Mr. Fukuyama could not write about this. His hand would not have turned, the feather would have broken, the keyboard would have seized. After all, he, in fact, in his books offered the world to take an example from liberal American democracy and even preached “the end stories»: According to Fukuyama, the American-style democracy would be the pinnacle of the development of world society.

A few words in conclusion. The growth of fast food with such a low wage (and the fabulous increase in incomes of top management) is not really surprising. The United States could well have created an internal “China”: realize cheap assembly production and do what the Chinese, Vietnamese and other foreign conveyor chains are doing now. True, cooking a hamburger is much easier than collecting an iPhone. No wonder someone famous not so long ago said that for the production of iPhones in the United States there is no material base ...

Observed and commented on Oleg Chuvakin
- especially for topwar.ru
Ctrl Enter
Noticed oshЫbku Highlight text and press. Ctrl + Enter
We are
Social inequality: excessive polarization of society threatens the country's securityResults of the week. “In our cooperative, the board is always agreed”
Military Reviewin Yandex News
Military Reviewin Google News
114 comments
Information
Dear reader, to leave comments on the publication, you must sign in.