Events in Libya - the view of the inhabitant

March 22 2011
12
Events in Libya never go away news pages of leading news agencies for more than a month. The situation in the country, which was actually engulfed in civil war, briefly receded into the shadows only after the devastating earthquake in Japan and returned to the front lines with the beginning of NATO's air aggression. After the adoption of the relevant UN resolution, which allowed the use of any forces and means to protect the civilian population of Libya, except for a direct land invasion, Western countries rushed to save the opposition regime in Benghazi.

It is worth noting that Muammar Gaddafi himself provoked the aggression, intensifying in recent days a large-scale attack on the positions of the opposition. Under the blows tank columns advancing under cover aviation, the rebellious cities one by one passed under the control of troops controlled by Gaddafi. Benghazi, the second largest city of Libya and the capital of the rebels, was under immediate threat. Realizing that the coalition of Western countries would go all the way to save young Libyan democracy, the colonel and leader of the revolution was in a hurry, using tricks already tested by one notorious Georgian politician. In fact, announcing a ceasefire, Gaddafi’s troops launched a decisive offensive on Benghazi, to stop which to a large extent helped only NATO bombers.

The international coalition that inflicts airstrikes on military targets in Libya has already been joined by 9 countries - the United States, the United Kingdom, Canada, France, Italy, Norway, Denmark, Spain, Belgium and Qatar. The command of a military operation, code-named "Odyssey. Dawn, ”the US command is still implementing, but creating a coalition command structure is only a matter of time. Washington has already noted that Muammar Gaddafi will be judged by his actions, not by words. It seems that the creator of the Jamahiriya decided to take seriously, and he may well repeat the fate of Saddam Hussein.

How did it happen that in a fairly prosperous country, which Libya was, the events came to civil war. Those who claim that in Libya everything is actually quite calm, and the reports of the uprising are invented by the media live in some kind of parallel world. It is impossible in principle to initiate and carry out such an operation on disinformation, although the role of the media in forcing this conflict was enormous. Military operations in the country do not actually cease a month, it is silly to argue with that. Again, if there were no opposition government in Benghazi, then on whose side then members of the Libyan government, in particular the Minister of Internal Affairs of the country, went over. Why practically all Libyan diplomats disowned the “white and fluffy” Gaddafi, and who were the two colonels who landed fighters in Malta and asked for political asylum? The uprising in Libya took place, and the consequences and manifestations of schism among the citizens of the country are obvious. 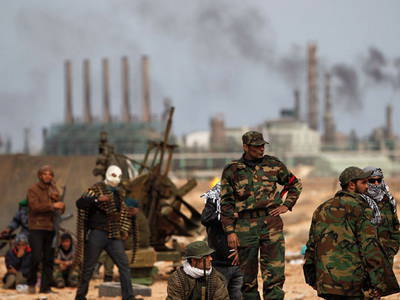 In my opinion, everything that happened in Libya has three main components. The first is the development of information technology and Internet communications. If the revolutions in Egypt and Tunisia happened even in the 80s or even in the early 90s of the last century, they could not provoke such a chain reaction that became possible now and embraced, in fact, all countries of the region. When the revolution is shown on the air virtually online, when on the Internet, anyone willing to post videos about what is happening, to bring the person to the "boiling point" becomes much easier. The development of the Internet has helped coordinate and bring people to the streets. Now you don’t need to print any leaflets, meet in safe houses - instead people have twitter, facebook, and e-mails. None of the special services is able to control the flow of this information on the Internet.

The second component of the Libyan revolution (and not only the Libyan one) is the method of coming to power of the current ruler. A person who came to power as a result of the revolution risks losing it in exactly the same way, and it is possible that he will have to leave his post with his feet forward. This is confirmed by many examples from modern stories of humanity. The countries whose leadership came to power in a revolutionary way and kept power in their hands, in fact, are extremely few.

The third component of the revolution is the self-consciousness of society, which has reached such a level that it placed freedom of will, freedom from censorship, above the existing material wealth. It cannot be said that the people in Libya lived poorly, on the contrary, they lived quite well. A country with a relatively small population, about 6 million, has 3% of world oil reserves. The average wages in the country were 1050 dollars, and that is without taking into account the monthly financial assistance personally from Gaddafi, from whom every working Libyan received 500 dollars. And this, think about it, almost 2,5 times higher than the average salary in Russia. However, people are morally and unconsciously tired of the "kings" in power, and Gaddafi was precisely the self-proclaimed "king." Yes, the monarch was generous to his people, but it was the monarch who concentrated all power in his hands. The Libyan people have every reason to believe that even without Muammar Gaddafi the country will not live without misery, because the oil in it will not disappear along with the dictator, and civil liberties will only increase. This means that the game is worth the candle.