To beat or not to beat? 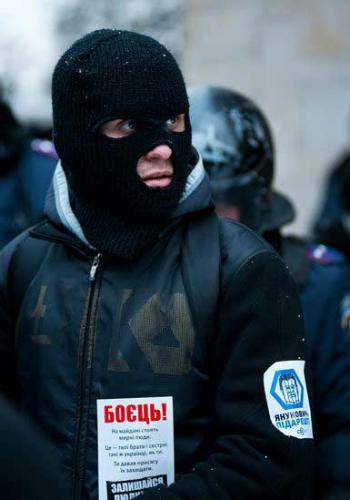 After the article "EuroPathur"(" 2000 ", No. 50 (681), 13-19.12.2013) among the many favorable comments I receive from some readers and those who categorically do not accept my thesis about the use of physical violence by law enforcement bodies over our Nazis, calling for the overthrow of legitimate authority . These readers are convinced that restoring order in this way is completely unacceptable in our country and has nothing in common with European values, which, in their opinion, are based solely on humanism.


Police violence, convinced "eurozaschennye" authors, practiced exclusively in the uncivilized countries of the world. Some authors, for example, vladmich from Lutsk, dragangid from Kiev, accused me of a “cynical” approach to defining such a measure of violence against offenders. They also condemned the “inadequacy of the use of force by law enforcement agencies,” which, in their opinion, was when the “Berkut” dispersed the “Maidan children” of Kiev.

It became obvious that the concept of the adequacy of the use of force has a different interpretation in society and is interpreted fairly freely. Especially now, when the "orange" media and the opposition (and many "sovereign" people!) Began to shed crocodile tears over the "innocent victims of the revolution." And reader P. Petrik from Drohobych, who sent me a message with angry Filipikas to the “bloody” “Berkut”, called the beaten-up demonstrators “heroes of the crutches” and even reproached violence.

I will not begin to delve into the legal subtleties of the adequacy or inadequacy of the use of force by our security forces during the dispersal of the Maidan demonstrators, all this is the responsibility of the relevant state bodies. I will cite two cases from my own life that I had to be a direct witness to. They should clarify a lot in the “adequate” issue, especially for that category of our citizens, for whom such concepts as humanism and tolerance in the life of society quite get along with complete permissiveness and anarchy.

The first case is from the distant autumn of 1994 in Kiev, when I had to witness the confrontation between our police and football hooligans. In the Champions League match, Dynamo lost to one of the European teams at the end of the match and at the end of the match, a crowd of outraged football fans not far from the Republican Stadium (now the Olympic) metro began to destroy everything that came its way.

When the atrocities seemed to subside, suddenly young people (200 — 300 people) began to try to beat out the bitterness of their favorite team’s defeat on a ... trolleybus. A crowd of hooligans began to rock the car to knock it to the side, the female driver left the cab for fear and watched what was happening on the street. Police in a megaphone urged the crowd to stop the disgrace, while the police did not take real action to curb the unrest.

The appeal of the police chief to the crowd of football fans was like a tearful paternal request, but not a warning about the responsibility for the ongoing barbarism. A man in the form of a police lieutenant colonel, who was given the authority to establish public order, turned to bullies on a megaphone: “Hloptsi, scream! You’ll watch the trolley bus for a while, and tomorrow you won’t be able to get to the robot. Please, obscenity! ”

While the police’s requests to outraged fans continued, all the windows of the car’s interior were smashed to pieces, the seats were cut by knives, after which the mob riders with a wild squeal scattered in all directions. The militia, in fact, was an extraordinary event and did not take any measures to protect the rule of law and the safety of the city property, thereby encouraging the hooligans to further disgraces.

I remember how, after what had happened, a tired and obviously good-natured lieutenant colonel took off his uniform cap, wiped his forehead with a handkerchief, and withdrew to his official car.

In the second case, football hooliganism, similar to Kiev, I had to observe exactly one year later, but in German Dortmund. The local Borussia lost the German Bundesliga football championship with a big score in the home field of the Berlin Hertha, after which its football fans began to defiantly behave and their behavior in the city became uncontrollable.

I drove through Dortmund that day, and a few blocks from the stadium, the police stopped me. The policeman asked to move aside, while referring to unexpected circumstances that had arisen, which caused not only me, but also other motorists to stop.

On the question of what kind of circumstances, the policeman informed that a heated crowd of local fans was sent here and hooligan excesses were not excluded, which means that football hooligans could be overclocked. He warned that there was nothing to fear, however, he recommended to stay in his own car, assuring that the stop would not be long.

When the crowd of football fans of “Borussia” flushed with beer appeared on the street, to be honest, I was seized with concern. Their number was dozens of times greater than the number of black-armed and armed, what is called “to the teeth” police officers from the special forces for the dispersal of football hooligans, of whom there were no more than fifty people. Dortmund fans behaved exactly as their Kiev mind mates, though they haven't hit anything yet.

Ignoring the recommendation to stay in the car, I decided to observe what was happening from a distance that was minimally allowed by the police cordon nearby. Nearby was a high police officer, like his Kiev counterpart, he commanded a small number of personnel and gave appropriate orders. Judging by his head thrown back, he received information from above on the radio, apparently from a police helicopter that was patrolling in the air.

When the sound of the cracked glass came out of the first broken window of football fans, the German chief loudly gave a few jerky teams and the special forces began to clear the street from the crowd of fans. I heard only two teams: “Kampfbereitschaft!” (“Combat readiness!”) And “Ahtung! Antshtifterin links! ”(“ Attention! The instigators on the left! ”) The special forces instantly cut the crowd of football fans into several parts and began to beat them, visually there were dozens of fans per police officer.

It struck me that in the human mess, which resembled a seasonal hunt of sea-killer whales for a huge flock of herring, the special forces beat, nevertheless, selectively and the blows got more aggressive fans. Asphalt on the street after some seconds was covered with umbrellas, torn fragments of jackets, glasses, backpacks, beer cans, shoes and sneakers, baseball caps, bloody handkerchiefs and thousands more items.

Fans, in whom every second had a broken-up face, could not escape anywhere, the entrances to all nearby streets and alleys were prudently blocked by the police. Police barriers pushed them into the open space of the street under the hail of special forces batons, which, as cinema Gleb Zheglov said, "knew well".

Aggressive hooligans were pulled out by the police from the crowd, they were put on their hands plastic "bracelets" and tied to each other. Then a powerful police water cannon appeared, which completed the special forces case. The aggressive crowd was scattered by the police in a matter of minutes, “packed” aggressive fans were left outside, they were dragged to the vehicles by their carts, they were driven into the salon with kicks, and the car with the detainees quickly left the sweep site. Employees of the communal service in orange vests began to put the street in order.

The policeman who stopped me, made a gesture to the detained motorists that it was time to leave. Driving past him, I asked: “What will happen to those who were taken away by the police after being detained in clashes? What punishment will they incur? ”He replied that absolutely nothing but one serious trouble — the hooligans would solidly replenish the city treasury, compensating financial damage for the broken windows and paying a considerable monetary penalty for disturbing public order. I realized that the self-sufficiency of the German special forces is as high as its level of professionalism.

Perhaps, these two specific cases, which I had to witness, will help determine the assessment of the adequacy of the use of force against the rioters to those of our citizens and officials from power structures who are still saturated with complacency in relation to our Nazis. Isn't that the “humane” militia lieutenant colonel of the 1994 model of the year, who paternally persuaded Kiev dunks not the “Kurochiti” trolleybus, to be at the forefront of future street “orange” disgraces?

If the issue of the adequacy of the use of force against the pogrom-mongers is to remain as it is understood by our opposition and some officials from the authorities, the question “Beat or not to beat?” Can very quickly turn Ukraine into Hamlet, which, as we know, sounds different - "To be or not to be?". Just how to be or not to be our state.

Ctrl Enter
Noticed oshЫbku Highlight text and press. Ctrl + Enter
We are
About Stalin and KhrushchevWhat you didn't want to know about England
Military Reviewin Yandex News
Military Reviewin Google News
73 comments
Information
Dear reader, to leave comments on the publication, you must sign in.