Liberalism and patriotism "on the fingers" 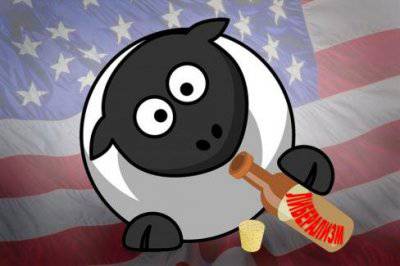 In recent years, the patriotic direction of thought has noticeably strengthened in Russia. However, the only clearly articulated, systematically promoted and “default” implicit ideology, unfortunately, still remains liberalism. For the time being, in conditions of steady economic growth, it could seem that their coexistence is quite possible. But now, probably, it is already obvious to everyone that they directly contradict and mutually exclude each other. Either patriotism or liberalism. An ordinary person will not understand the intricacies of liberal ideology, but may fall under its destructive influence. It means that we have to figure it out for him, bring it to him and save him from a liberal fall. And make it simple, clear and affordable. What is called on the fingers.


About this is just an article. In it, I offer the simplest, in my opinion, explanation of the difference between liberalism and patriotism. The explanation, referring directly to the ideological foundations - not pronounced, and therefore the most profound.

So, patriotism (in whatever form it appears - Orthodox monarchy, Soviet-communist, Eurasian, etc.) necessarily proceeds from the simple and obvious idea for the carriers of the patriotic idea that:

the whole is always more important than the simple mechanical sum of all its parts;
the whole is not reduced to the sum of the parts;
the whole always precedes its parts;
only the whole part is part;
without the whole the part cannot live.
In short, the whole is more important than its parts. Any community can be considered as a whole. For example, people, religion, language group, or even family. So we come to the concept of identity, which unites its individual carriers in the same way as the whole unites its parts. Any identity is possible only through recognition of the primacy of the whole over the part.

Take the family. The patriotic understanding of the family is not just a temporary residence in the same house of several people. Yes, the family consists of these people, but it precedes them, as it were, dominates, hangs over them with its significance, fills their living with the unifying "idea of ​​the family." Even when a man and a woman only get married, they already cease to be just a man and just a woman, they, as it were, “grow” with additional significance. No wonder the apostle Paul, speaking of the family, said that "this is a great mystery" (Eph. 5, 32). How to solve it? Yes, all the same - through the recognition of the primacy of the whole over parts.

Such is the patriotic view of anything: at first there is a community, exceeding in value the sum of all its members.

However, the basis of liberalism is a different view. He proceeds from the fact that there are only separate things, parts, individuals, and the whole is an abstraction derived from this set. Whatever the sum of the parts, this abstraction cannot be more important than a separate part, since only it is real - a separate part, a separate object, a separate individual. All that besides this is the imagination of the mind, nothing more.

On this basis, a postulate is introduced on the supremacy of rights and freedoms of a hotel individual, and the interests of society are declared a chimera, under the cover of which the rights of an individual particle, this social atom, autonomous individual, sovereign citizen are oppressed.

Please note that in the latter concept, sovereignty is transferred from state to citizen. A citizen becomes himself, without regard to his citizenship. He becomes a citizen of a global nation, a citizen of the world. Such is the worldview of globalism.

The basis of the dominant until now liberal discourse “by default” is the idea of ​​the ontological superiority of a part over the whole, the real individual over the supposedly abstract whole. (The origins of this view go back to the European medieval philosophical line of nominalism.)

Therefore, for a person who adheres to such views, the Fatherland is an empty abstraction, since there are only individuals. A people is a simple multitude of citizens living in a territory. Family is a temporary cohabitation by agreement. And so on.

But due to the fact that it is the patriotic holistic view that is organically inherent in the Russian civilization, our task is to clear the discourse from the liberal “sweetheart” by revealing its corrupting underlying reason. Of course, the common people do not care about any theoretical subtleties, but to explain on fingers the difference between the Russian patriotic and Western liberal worldview to each of us is quite capable.

Of course, speaking in this article about patriotism and liberalism, I have significantly simplified the picture, but for simplicity of understanding, it is quite suitable. And when our people clearly understand what is being offered under the guise of “rights and freedoms”, he will forever cast off the liberal bait. More we will not fall for this bait!

Ctrl Enter
Noticed oshЫbku Highlight text and press. Ctrl + Enter
We are
What you didn't want to know about EnglandThe West without the USSR: the world goes to an ideological explosion
Military Reviewin Yandex News
Military Reviewin Google News
31 comment
Information
Dear reader, to leave comments on the publication, you must sign in.