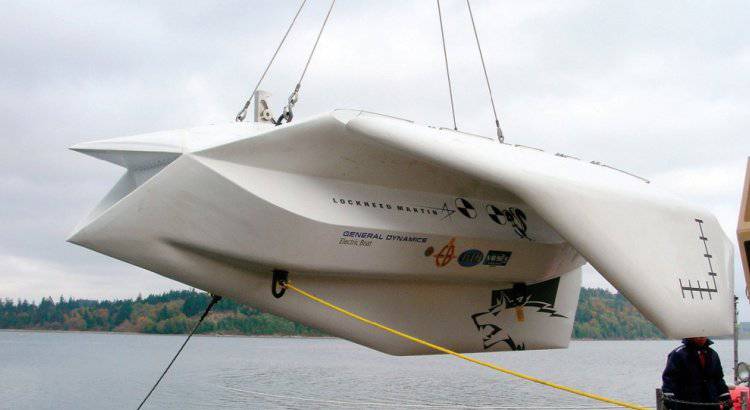 Admiral Yoroku Yamamoto bent over the map, and an ominous silence reigned in the Nagato saloon. At this moment, the three submarines of the “Sentoku” type I-400, I-401 and I-402 were approaching the US coast. Operation "Cherry Blossoms at Night" has begun!

At sunset, three hydroplanes carrying death under their wings — bombs filled with infectious agents — will rise from each submarine aircraft carrier. California’s population is threatened with an epidemic of supercool, in 60 once the virulence of an ordinary plague and killing anyone who has even a drop of Anglo-Saxon blood! Too dirty, but biological attacks weapons - This is the only chance for Japan to win the insane war.

What will happen to the pilots after they drop bombs over San Diego? There were no exact instructions on this score, but everyone knew that they would act as befits a real samurai ...

The reality turned out to be discouraging: 9 September 1942 of the year midshipman Nabuto Fujita on the Yokosuka E14Y seaplane symbolically “bombed” forests in Oregon. The Japanese dropped four phosphorus incendiary bombs on the territory of the United States, after which he returned aboard the submarine I-25 waiting for him. Having made a couple of successful sorties, the Japanese hurried to leave the dangerous waters. On the way home, I-25 sank two American tankers and safely dropped off at Yokosuka at the end of October 1942. 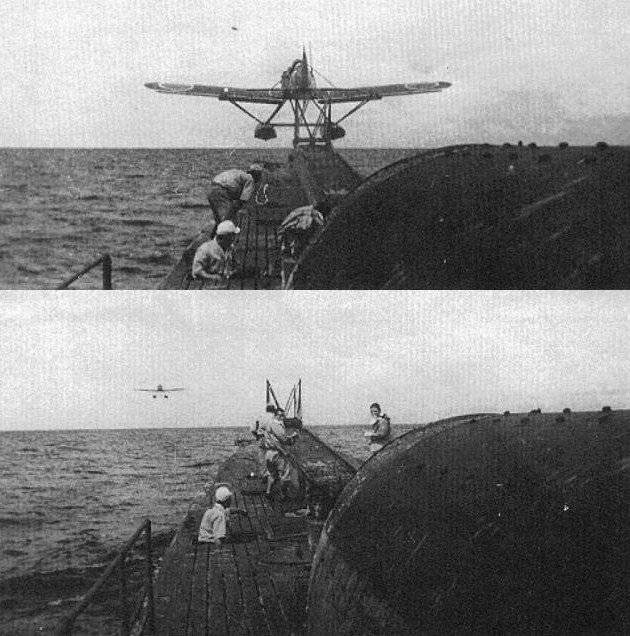 The mysterious operation “Cherry Blossoms at Night”, which was prepared for the entire 1944 and the first half of 1945, remained a terrible tale: the launch of submarine aircraft carriers with biological weapons on board was constantly postponed, the last time X was assigned on September 22 1945.

The protagonist of all these stories, of course, became the Japanese submarine aircraft carriers. In total, during the war years, the imperial fleet 47 submarines with aircraft on board were accepted - from the huge 122-meter Sentoku with a displacement of 6500 tons, each carrying three Aichi M6A Seiran bombers, to the “ordinary” submarines of type B1, on which the light E14Y reconnaissance hydroplanes were based.

The latter were quite actively used in combat operations in the Pacific. In addition to the first and only stories bombing of the continental United States, scouts Yokosuka E14Y made a number of famous raids. On January 1, 1942, a seaplane from a submarine I-7 flew around the island of Oahu in order to find out the results of the strike at the base at Pearl Harbor. In February-March 1942, underwater-based seaplanes were used for aerial photography of Sydney and Melbourne harbors, and British colonies in the Indian Ocean were examined. But since 1943, the use of E14Y has become impossible. A lone scout was quickly spotted by radars and became a victim of the enemy aviation. And the need for lengthy prelaunch preparations has become an impermissible luxury in the face of increased enemy anti-submarine defense.

The total release of the Yokosuka E14Y during the war years was 138 aircraft.

Along with the Japanese, the possibility of equipping submarines with flying reconnaissance aircraft was considered by the command of Kriegsmarine. By 1942, the Germans built and tested the towed autogyro Fa.330 Bachstelze ("Wagtail"). Small-sized aircraft weight 75 kg, relying in flight on the bearing three-blade propeller, rotated in the autorotation mode. With a maximum ground speed of 80 km / h (wind + own boat movement) and using a tracker with a length of 300 meters, the height of the “Wagtail” reached 220 meters. Armed with binoculars, the pilot of the autogyro could observe the maritime situation in a radius of 53 km (from the bridge of the boat - only 8 km)!

It is known that the Wagtail sets were in service with at least three Type IX submarines - U-171, U-181 and U-852. Submariners conducted reconnaissance with the help of autogyros in the desert areas of the South Atlantic, off the African coast and in the Indian Ocean - where the probability of meeting with the allied anti-submarine forces was minimal. In general, the gyroplane did not gain popularity in the submarine fleet - the time to select a rail reached four minutes. The autogyro slowed down the time of the submarine’s emergency dive several times, which could be fatal when meeting with an anti-submarine aircraft.

After the war, some of the 200 built Wagtails fell into the hands of the British - Her Majesty’s fleet conducted a series of successful experiments, and eventually sent out amusing toys to museums. 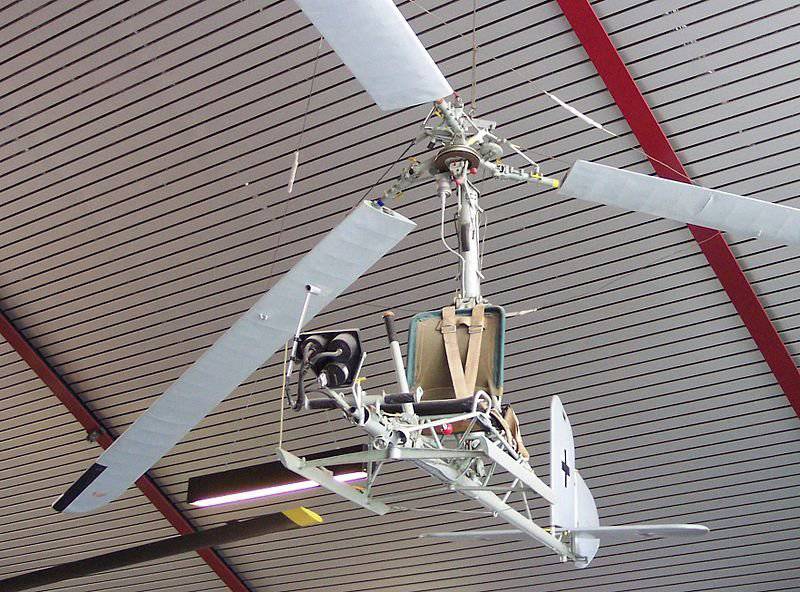 Focke-Achgelis Fa 330 "Bachstelze"
It remains to state that the debut of submarine-based aviation during the Second World War turned out to be an interesting, but not very successful event. The level of technology in those years did not allow any serious aircraft to be placed on board the submarine. Launching and boarding were carried out exclusively in the surface position, which violated the secrecy of submarines, and the vehicles themselves turned out to be too cumbersome and primitive.

Carrying out strike operations with the use of submarine aircraft carriers made sense only in the presence of a chemical or biological super-weapon, causing tangible consequences with the minimum size of ammunition. Intelligence using such aircraft was also fraught with considerable difficulties and was rather an exotic combat technique than a regular way to search for surface targets.

In 1950-60-s, with the advent of nuclear reactors and rocket weapons, the idea of ​​equipping submarines with airplanes has completely lost its relevance.
For the time being ...

In 1971, the issue of equipping submarines with aircraft powerfully "moved" the Soviet Union forward.

Watching the spy fighters about the “007 agent”, the Soviet “James Bonds” got excited about the idea of ​​building an ultralight helicopter that fits in a suitcase and is launched through a standard 533 mm torpedo tube. Having got ashore, the saboteur uncovered a waterproof case, for 15 minutes he collected a helicopter - and, waving goodbye to the amazed fishermen, already half an hour later found himself in 50 km kilometers from the landing site, deep in the enemy's territory.

But how to build such a car?

... Comrade Kamov sighed dreamily and plunged into nostalgia for his youth - just such a small and light was his first Ka-8 helicopter. Only with the difference that modern technologies and special technical solutions will make the construction even easier and make the helicopter collapsible.
So Ka-56 "Osa" appeared - an aircraft weighing 110 kg, according to calculations, capable of overcoming 150 km with a speed of 100 + km / h!

Alas, the modern James Bond increasingly prefer expensive tuxedos to wet wetsuits, and comfortable Boeings of international airlines have become their main means of transportation. Super-helicopter "Wasp" and remained in a single copy, taking its place in the list of curious inventions. 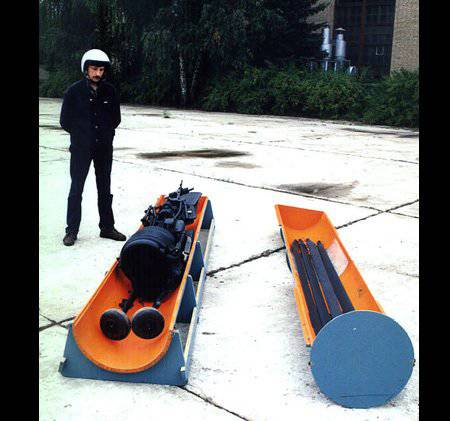 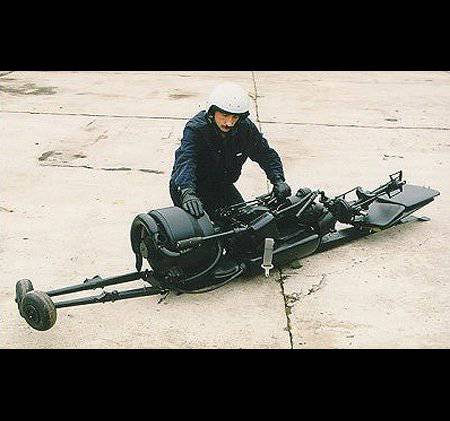 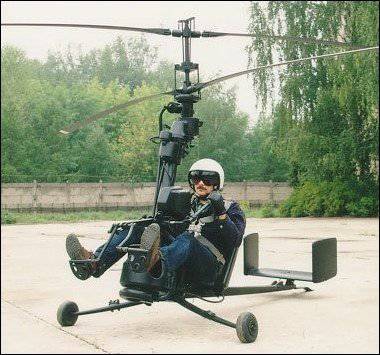 Unfortunately, “Osa” did not make a single flight - the designers failed to bring to mind the small-sized rotary-piston engine with a power of 40 l. with. Presented in the photos "helicopter" - just a full-scale mockup without a power plant.

The E14Y seaplane, the Bakhstelze towed autogyro, the Osa ultralight helicopter ... It would seem that the idea of ​​placing aircraft on board the submarines suffered a complete fiasco. But with the advent of the UAV, everything changed.

Compact size, new technologies and progress in microelectronics, the possibility of long-term storage in a missile shaft or a submarine torpedo device, an underwater launch without unnecessary actions and direct human participation, no risk to the life and health of the crew in case of loss of the device ... We have a terrific reconnaissance complex, able to provide submarines with new capabilities in terms of reconnaissance and target detection!

The scope of application of such equipment - covert observation of the coast and the situation at sea with the transfer of data to the submarine carrier, aircraft, ship, satellite - to all who are interested in information about the situation in this square. That does not preclude further use of the UAV for the "point elimination" of especially important targets and sabotage in the mode of increased secrecy.

The main advantage of underwater-based UAVs is the secret delivery to the specified region of the globe. The enemy, like the entire world community, until the last moment will not know about the upcoming reconnaissance raid - the intelligence officer suddenly appears from nowhere, and then disappears in the same mysterious way into the depths of the ocean. Even if it is possible to establish the fact of violation of the airspace of the country and present weighty arguments (fragments of UAVs), it will be extremely difficult to prove their belonging. Indeed, at that moment no surface ships or aircraft carrier groups appeared from the coast of Guinea-Bissau, from which a scout could rise.

Finally, the UAV will be able to increase the situational awareness of submarines in a naval battle.

In the spring of 2006, information appeared on the strange Lockheed Martin Cormorant aircraft, whose development was supervised by the Defense Advanced Projects Agency DARPA. Comorant, whose name means “Cormorant,” was a submarine-based reactive reconnaissance UAV oriented to accommodate converted Ohio-type SSBNs.

Not so much is known about the device itself: a folding wing, a minimum of holes, launching rocket boosters. To avoid corrosion, titanium was chosen as the main structural material. All internal cavities of the apparatus were abundantly filled with polymeric foam. This decision made the device resistant to water pressure and allowed to start from a depth of 150 feet (46 m). 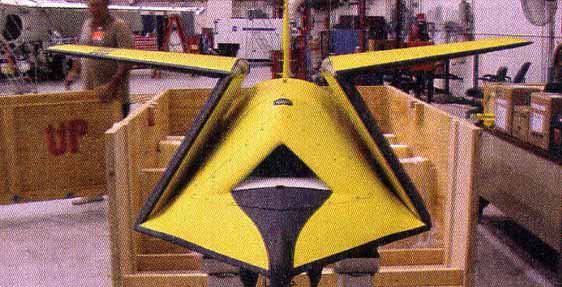 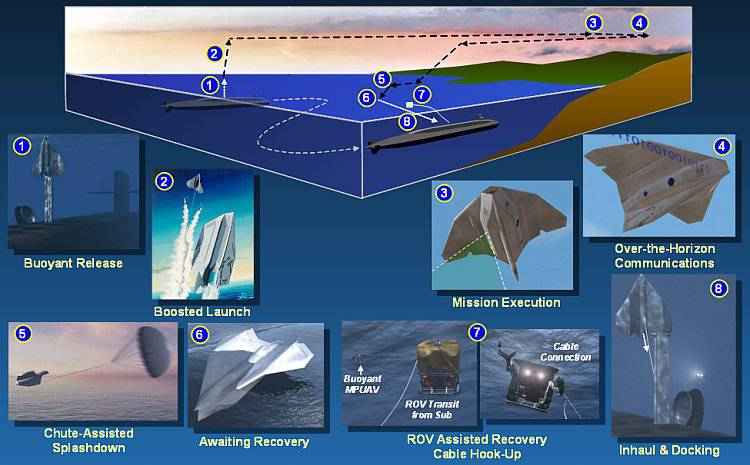 Having completed the special mission, the device had to go to the specified point, with the help of a parachute to extinguish speed, fold wings, seal to the maximum - and wait for the boat approach afloat. An hour later, the sufferer would be picked up with a cable and returned to the cozy Ohio mine.

Despite successful test results and built-in full-scale mockups, the project was closed in 2008 year. “Cormorant” turned out to be excessively complex and expensive for its tasks.

Back to the Future

And here's another newsthat sounded like a bolt from the blue: 6 December 2013, the Providence submarine (SSN-719), while underwater, successfully launched an eXperimental Fuel Cell Unmanned Aerial System drone. Lightweight aircraft with a folding wing, using fuel cells as an energy source.

The launch was made through a standard torpedo tube using a sealed Sea Robin container (an empty launch canister from under "Tomahawk"). The container floated to the surface and took up a vertical position - after a certain time, when the boat went a dozen miles, the pyrobolts cut off the container lid, and the XFC UAS rose into the air.

The UAV circled several hours over the ocean, broadcasting a “picture” from its cameras in real time on board the submarine and auxiliary ship, and then landed at the airfield of the AUTEC research center (Bahamas).

Dr. Warren Schulz, who is in charge of the XFC UAS program, congratulated his colleagues on his success, while stressing that the successful test of underwater-based UAVs is the fruit of six years of joint efforts of science and industry. The appearance of drones on the submarine fleet, like the XFC UAS, will open up new perspectives and opportunities in terms of reconnaissance, observation of the enemy and information support for submarines. 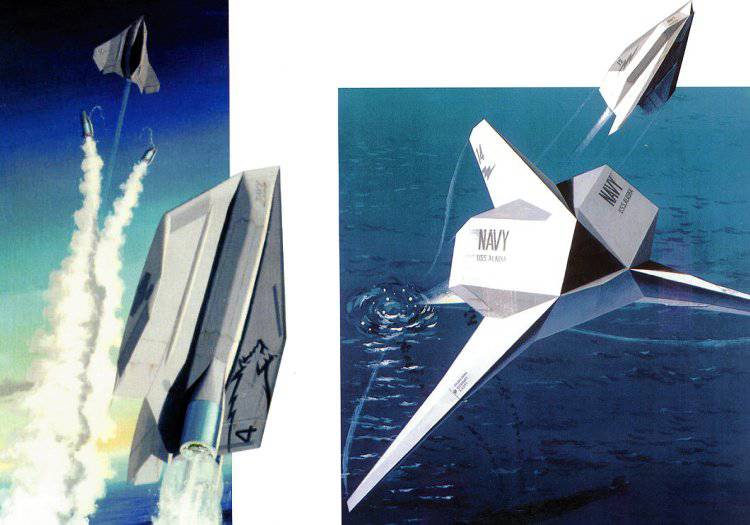 Modern local wars have changed the understanding of the role of the naval forces and the submarine fleet. Submariners are increasingly faced with unexpected threats and perform the most unusual missions. The main task is hidden surveillance in coastal waters, followed by rocket attacks on the shore.

Under current conditions, the debate about the feasibility of placing UAVs on board submarines is again gaining popularity in the minds of the military and inventors. What is the result of all this?

A popup will show.