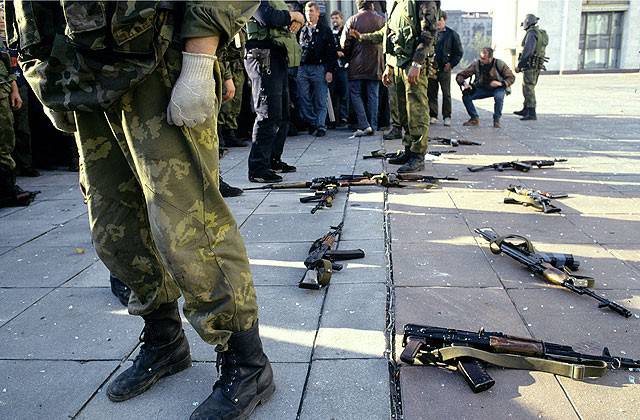 Fighters of the Alpha group at the time of negotiations with supporters of parliament in the House of Councils of the Russian Federation. Photo: Vladimir Vyatkin / RIA News

The exchange of Louis Corvalan, the release of schoolchildren in Sarapul and other operations of the most famous Russian special forces

34 a year ago, Soviet special forces stormed the palace of the head of Afghanistan, Hafizullah Amin. For the special division "Alpha" this operation has become a kind of calling card. "Russian Planet" tells about the first and not the most famous operations of the anti-terrorist unit.

"Alpha" group was established head of the KGB, Yuri Andropov, after the hostage crisis at the Munich Olympics in 1972 year, but the direct cause of the formation of anti-terror special squad was another terrorist attack - the seizure of the Yak-40, make flights Moscow-Bryansk. A few days later, Andropov ordered the creation of an anti-terrorist group "A" to submit to him personally. The first operation of the new unit was not the liberation of the hostages, and power support in the exchange of Soviet dissident Vladimir Bukovsky on the Chilean Communist Louis Corvalan. It was the employees of Alpha who accompanied Bukovsky on the flight to Zurich.

In March, 1979, the alfovtsy conducted the first combat operation against the terrorist. Yury Vlasenko, a mentally ill resident of Kherson, came to the US embassy with an explosive device and demanded that he go abroad immediately. Otherwise, he threatened to detonate the bomb. The commander of Group A, Gennady Zaitsev, and his deputy negotiated with a terrorist, but they ended without result. Then Andropov personally gave the order to apply weapon. Major Sergey Golov fired a terrorist with a pistol with a silencer, but Vlasenko managed to activate an explosive device and soon died from wounds.

The most famous operation of the Soviet special forces. 56 people took part in the assault - 24 alfovts and 30 fighters of the special reserve of the KGB "Zenit". The rest of the military involved in the operation covered the special forces, who stormed the residence of the head of Afghanistan, Amin. His guards consisted of a total of 2300 people; The task of the Soviet covering groups, including paratroopers from the so-called "Muslim battalion", was to cut off most of Amin’s guard from the palace. Despite this balance of power, the task was successfully completed - the palace was taken by storm, Amin and his guards were killed near 200. The losses of the Soviet side amounted to five people from among the special forces and 15 - among the military.

Liberation of schoolchildren in Sarapul

At the end of 1981, two deserters, Alexander Melnikov and Akhmetzhan Kolpakbayev, fled from the unit with weapons. They came to school No. XXUMX in the Udmurt city of Sarapul under the pretext of searching for an anti-personnel mine and with a pre-planned plan of action. They entered one of the classes and captured 12 students with a teacher. The terrorists made a demand: to issue them a passport and provide a flight to the Federal Republic of Germany or any western country. Andropov sent group A to Sarapul. After the negotiations, the terrorists released the hostages and were arrested. The release of the hostages occurred without a single shot.

In November, 1983, a group of terrorists seized the Tu-134, which flew from Tbilisi to Batumi. The seizure was carefully thought out, the terrorists met the airport employee in advance in order to bypass the search and bring the weapon on board. There were seven of them, all of them were offspring of high-ranking families — some had already been abroad, which in Soviet times was the privilege of the nomenclature. At the same time, the terrorists wanted to look like fighters against the Soviet regime. Later in court, they cited the Brazinskas family as an example.

The hijackers planned to capture a plane near Batumi in order to immediately cross the border. But due to bad weather, the pilots were ordered to turn back to Tbilisi, and the invaders did not know about this. Confident that they were near Batumi, they captured a stewardess and shot several people whom they mistook for service employees aviation security. Later it turned out that the dead had nothing to do with guarding the aircraft. Bursting into the cockpit, the terrorists demanded to fly to Turkey. Hearing the objections of the crew, they killed a flight engineer and seriously wounded one of the pilots. The aircraft commander, in response to the shooting, made several sharp maneuvers to knock down the terrorists. Taking advantage of their confusion, the pilots pushed the hijackers out of the cockpit and dragged the seriously wounded there. Then they closed from the inside - having failed to break into the cockpit, the terrorists began firing in the cabin, killing another passenger and injuring three. Pilots, meanwhile, landed a plane at the Tbilisi airport.

Liner cordoned off by the military; negotiations began. The terrorists stood their ground and demanded to give them the right to fly to Turkey, threatening to blow up the plane otherwise. In the evening, the group “Alpha” arrived in Tbilisi. When negotiations reached an impasse, it was decided to storm. He was successful: the terrorists did not even have time to use the grenades they had. During the assault no one was hurt. Considering that there were seven terrorists and all of them were armed, this was an absolute success of the Alpha men.