One more step into the future. UAVs en route to US airspace 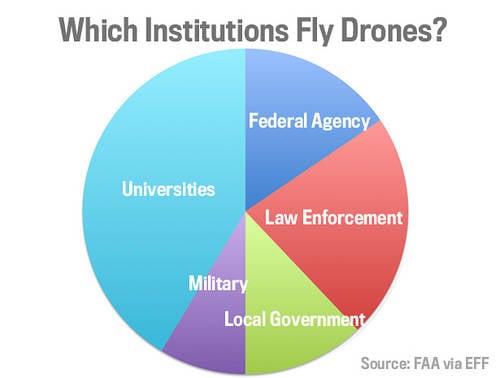 Federal Office of Civil aviation The United States has identified six states where various civilian drone methods will be tested.


The winners in the hardcore contest involving 24 candidates were Alaska, Nevada, New York, North Dakota, Texas and Virginia. The selection criteria included, in particular, the topographic and climatic diversity and the intensity of aviation flows near the proposed testing sites.

Congress instructed the Civil Aviation Authority to develop a drone movement control system in the country's airspace by 2015.

After five years, according to the plans, seven and a half thousand small-sized drones can be used to identify the centers of forest fires, monitor people suspected of committing crimes, select locations for full-scale filming and inspect pipelines.

“Safety is our main concern,” officials say, referring to equipping drones with instruments that will allow them to detect other aircraft in a timely manner and avoid collisions with them.

The first point of testing drones should be operational within six months and will work until the 2017 year.

Working at testing sites, creating a protocol, taking security measures into account, honing flight regulations, a machine accounting system, will allow the USA to become the first country in the world where drones will be fully integrated into all national airspace.

The breath of the future is already noticeable.

Recall that recently Teal Group Corp. has already published its tenth report on the global UAV market. By 2023, the market will increase from the current 5,2 billions to 11,6 billions, and investment in research and development will rise from 1,9 to 4 billions. The US will occupy the 65% R & D market and 51% sales. Impressive and investment in research and development work on stuffing drones. This is primarily about radars, sensor cameras, electronics, etc. According to forecasts, 2013 billion dollars was invested in the filling in 2,3, and this sum will increase to 4,6 billion by 2022. It is expected that within ten years the 22 010 mini-UAV, 2 259 small tactical, 1 695 tactical, 828 medium-altitude long duration, 436 sea, 105 high-altitude long duration and 87 impact drone will be procured in the world.

Domestic demand for UAVs is growing in the USA. According to the Electronic Frontier Foundation, the Bureau of Customs and Border Protection of the US Department of Homeland Security has already made more than 500 Predator UAV sorties (and not only in the border areas of the country) as part of helping various security agencies (police, FBI, drug control, etc.). .P.). Back in April 2012 of the Year, the Electronic Frontier Foundation published a list of 60 government organizations that received permission from the United States Federal Aviation Administration (FAA) to use unmanned aerial vehicles. Also last year, the US Congress passed a law obliging the FAA by September 2015 to introduce the widespread practice of issuing licenses and create a working system for incorporating commercial UAVs into US air traffic. It even goes about issuing license plates flying drones. It is expected that by 2020, the 15 000 drones will fly in US airspace, and by 2030 all 30 000 machines will fly.

The Association for Unmanned Vehicle Systems International (AUVSI) predicts that in 10 over the years, the contribution of the commercial drones industry to the US economy will amount to 80 billion dollars, and more than 100 thousands of new jobs will be created.