As private Ishchenko stabbed seven Germans with a bayonet 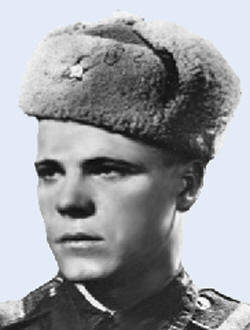 It happened on January 5, 1944, on the first day of the Kirovograd operation. Private Ivan Ischenko was sent as part of a tank assault force to liberate the village of Kazarka.


Ivan Ilyich Ischenko was a native of almost the same places - he was born in the village of Vershino-Kamenka, now Novgorodsky District, Kirovograd Region. His native village was liberated only a few months before the events described, and Ivan's 18-year-old was immediately included in the 294 Guards Rifle Regiment.

Early in the morning, a tank with armored paratroopers burst into the village. The entire rifle squad had already jumped, and began to advance towards the village on foot, but the young soldier decided to get to tank to the Germans themselves. Soon German trenches appeared. The tank moved the trench, and our hero jumped right into the trench. Immediately he came across an officer. Pulling a Walter from its holster, he shot at our soldier, but missed from a three-meter distance. The bullet only scratched the butt of the rifle.

The Ischenko's rifle shop was empty - he had shot all five cartridges while moving on the tank’s armor, and he didn’t have time to insert the next clip. There was only one way: to act with a bayonet. In the bayonet class, the young fighter was taught to pierce the enemy only a couple of inches, but this was his first bayonet battle, and he drove the bayonet into the German to the very trunk, after which, in order to remove the body of the killed officer from the bayonet, he had to tinker. When the bayonet was free, three more Germans gathered at the scene, waiting for their turn. The trench's message flow was small, and the Germans could approach Ischenko only one at a time. It is not known why none of them tried to shoot, without fail trying to stab our fighter with bayonets of their fighters. 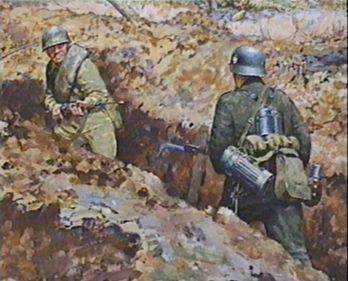 The feat of Ivan Ischenko tried to portray the post-war artist, but he did not take into account that the event happened on January 5

However, our bayonet was elementarily longer, and our fighter managed to prick before the German could reach him. Ishchenko was surprised when he realized that the Germans were falling dead even before the bayonet had been stuck in them, and when four more frites were replaced by four more, he decided to try simply to touch one of them with the bayonet. The German began to fall silently forward, and with its weight ran into a bayonet already dead. Pulling the rifle away from the falling German, Ischenko immediately stumbled with the bayonet of the following. It is not known how many more Germans would have stabbed our fighter with a bayonet, but then his fellow soldiers, who finally reached the trench, jumped into the trench, and the battle stopped in a few seconds. During the attack, none of our fighters died - all the Germans were busy not shooting at the attackers, but trying to stab Ischenko alone.
By order of the 97 Guards Rifle Division (No.58 / n) of 19 January 1944 of the Guard, the Red Army man Ischenko Ivan Ilyich was awarded the Order of Glory of the 3 degree. It was not the last award of Ivan Ischenko. After this incident, he was transferred to regimental intelligence, and by the end of the war he became a full gentleman of the Order of Glory.

Fragment of the award sheet

Ctrl Enter
Noticed oshЫbku Highlight text and press. Ctrl + Enter
We are
Sons of ivanBy the 70 anniversary of the landing and the formation of a bridgehead Small land
Military Reviewin Yandex News
Military Reviewin Google News
111 comments
Information
Dear reader, to leave comments on the publication, you must sign in.