They dropped the armor ...

January 6 2014
84
Our regiment has arrived, ”said the members of the so-called Eurozone, the territorial aggregate of the states of the European Union, which use such a“ national ”currency as the euro. Since January 1, 2014, Latvia has become the next (18) member of the eurozone. Immediately after the first salvos of the New Year's salute in Riga, Daugavpils, Jurmala and other Latvian cities, people decided to go to the ATMs to check whether it is possible to withdraw their savings or the rest of the bank card in euros without problems. It turned out that the European "brothers" and the Latvian authorities themselves did not deceive the ordinary citizens of the republic - Latvia entered the euro zone, and ATMs began to "spit" exclusively with a single European currency. 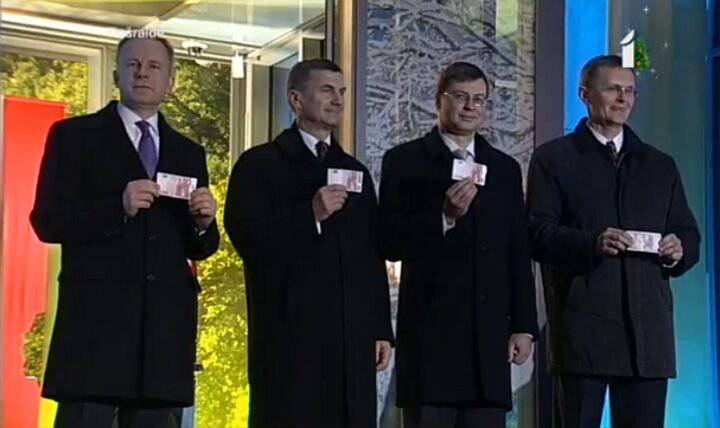 That inhabitants of Latvia could exchange armor available at them for euro, the authorities gave two weeks. After 14 in January of 2014, Latvia will finally be left without lats, and those people who, for some reason, within the next week will not have time to exchange their savings in lats for a new currency for Latvia, by fate will become owners of beautiful colored pieces of paper and specular coins, not subject to conversion, and lost the opportunity to "walk" in the country. If a resident of Latvia has time to place his lats in a bank account before the date specified above, the funds will automatically be converted into euro currency at the designated central bank of Latvia: 1 lat equals 1,426 euro. Yes, thousandths are present ...

This situation was the cause of this hype. And the beginning of the hype was laid even before Latvia officially switched to the euro. Latvian citizens literally attacked local banks, showing a desire to either open a deposit in lats or to replenish an existing bank account. Due to this, in Latvia only in November-December, the volume of deposits of individuals increased by almost 8%. This served to significantly improve the situation in the Latvian economy, and by the end of the year gave the Latvian authorities an opportunity to report to European partners at significant economic growth rates: the EU record was about 4,3%. What is the basis of such a record is a separate issue, and as you can see, the basis of growth is far from the development of local industry or the modernization of the banking sector itself ...

After entering the eurozone, the growth rates of individuals' deposits in Latvia slowed down significantly. It says that those people who managed to place the “stale” in their “stockings” lats on deposits before the onset of 2014 began to withdraw the funds placed - of course, in euros. And those Latvians who did not have time to put bank accounts into bank accounts are now trying to make an exchange in a more accessible way - through ATMs. But the fact is that such efforts lead to a number of difficulties. Already, not all banks provide full operation of ATMs. In other words, the volumes of euros loaded in them are not enough for every citizen to make an exchange without much excitement, and therefore at the beginning of the week the Latvian banks expect another influx of people who could not make an exchange outside the walls of banks.

This would seem to lead to a new leap in the Latvian economy, but neither European nor Latvian economists expect anything like it. What are the reasons for such pessimism? It turned out that simultaneously with the introduction of the euro in Latvia, there was an artificial increase in prices. The artificiality lies in the fact that the marked rate of 1,426 euros for lat, it is simply impossible to implement in retail sales. Most of the sellers, not wanting to incur losses associated with losses when exchanging one currency for another (the sellers of goods and services in Latvia are already obliged to issue delivery in Latvia only in euro), went in a simple way - rounding prices towards higher prices for products. In other words, a product that costs, for example, 3 lat, in euro should cost 4,278 - there are thousandths, to which sellers add values ​​to make the amount more acceptable for mutual settlements. Instead of 4,278 euro, 4,28 euro appears already. However, this is not the limit for rounding, because hardly anyone will be looking for a Eurocent transfer to 2 today in Latvia, and therefore, where there were 4,28 euros, 4,3 or even 4,5 euros appear. Thus, it turns out that even cheap products based on conversion are artificially added to the price of 4-5%. That is, if the Latvian economy won in talks about the upcoming exchange of lats for the euro, then on a real (successful) exchange, the European emission centers ultimately win, and this in turn hits the ordinary Latvian taxpayer.

As soon as the Latvians began to realize that the transition to the euro led to price increases, many immediately decided to compensate for their losses. Compensation is carried out in a peculiar way: people hurried to neighboring Lithuania, which has not yet switched to the euro, and in which prices for most goods turned out to be lower than those in Latvia. Edition Delphi tells that in the cities in the north of Lithuania (part of the country adjacent to Latvia) in the first days of the new year there is a real invasion of Latvians who are ready to buy virtually everything: food, clothing, fuel. A sort of Baltic shopping for savings.

When switching over to the euro of neighboring Estonia (it was in 2011), the authorities of this state managed not to aggravate the situation connected with the conversion. Prices, of course, also increased, but they were able to compensate for the increase in wages. True, in the end it turned out that such goodness for the Estonian population turned into an increase in the volumes of Tallinn’s loan obligations to the large European economy, but this is what Estonia doesn’t like to spread about today.

Whether compensation for losses in the real solvency of the population of Latvia through European loans will be possible. But it is also possible that as soon as the third Baltic “sister” - Lithuania - enters the euro zone, Europe will force all three “sisters” to pay the bills. Like Greece, like Portugal ... Will there be by that time the strength to pay off debts in the same Latvian economy? If there is no “big Latvian miracle”, connected with the revival of production, including agricultural production (which, frankly, is hard to believe), then Latvia will be asked to repeat the options already worked out by Brussels, Berlin and Paris. It is possible to repeat the Cyprus option, when deposits in today's popular Latvian banks will simply be taken away (in one or another percentage ratio) in favor of the same Brussels, Paris and Berlin. There are all prerequisites for this, because Latvia has signed documents on the actual refusal to conduct its own financial policy. That is, finance in Latvia since 1 of January of this year is controlled by a completely non-Latvian central bank ... Today, interest in Latvian banks is artificially heated, so that later (when the money supply of deposits reaches an acceptable level for Brussels), the EU has removed financial cream from Latvia, using Latvia as a new bait for investors.