Does Armenia have an alternative to the Customs Union? 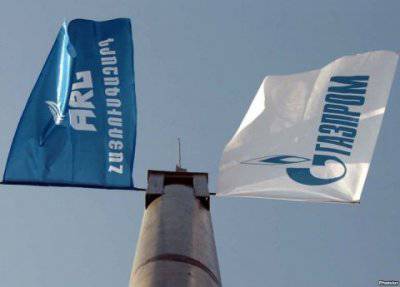 In early September last year, Armenian President Serzh Sargsyan announced that Armenia is ready to embark on the path of joining the Customs Union. November 6 signed agreements to deepen cooperation with the EEC (Eurasian Economic Commission). In December, at a meeting of the Supreme Eurasian Economic Council, the Armenian delegation put its signatures on the documents that open the door for Armenia to join the Customs and Eurasian Economic Unions.


The integration course in the Customs Union for Armenia is already bearing the first results. At the end of the year, the Russian gas super giant Gazprom signed with ArmRosgazprom CJSC a contract for the supply of Russian “blue” fuel to Armenia, up to 2018 of the year. To clarify: 80% of the shares of ArmRosgazprom CJSC belongs directly to Gazprom, and 20% to the Government of the Republic of Armenia.

The total supply should be 12,5 billion cubic meters. At the same time, the contract allows Armenia to save about 1 billion dollars over the next five years, as the pricing policy has changed for Armenia after signing the above agreement. If before the onset of 2014, the price of gas for this Caucasian state was about 270 dollars per thousand cubic meters, then under the new agreements the price is reduced to 189 dollars for the same volume. For example: Belarus has been receiving Russian gas at the price of 175 dollars since the beginning of the year. In other words, the price of gas for Armenian consumers (or rather, for ArmRosgazprom, that is, the price “at the entrance”) differs little from the price inside the Customs Union. The extra charge in 14 dollars for 1000 cubic meters of gas arises from the calculation of transportation (it is somewhat easier to bring gas to Belarus than to Armenia).

However, for some reason, the Armenian leadership and such a price for Russian gas seemed high. Literally at the very beginning of this year, Armenia decided to hold talks (by the way, regular ones) on possible gas supplies from Iran. At the same time, according to Minister of Energy and Natural Resources Armen Movsisyan, the focus of such negotiations will be on possible supplies of Iranian gas to the republic at a price lower than 189 dollars per thousand cubic meters (that is, at a price lower than the Russian).

On the one hand, this move itself looks quite justified: they are looking for where it is cheaper. But on the other hand, the upcoming negotiations still have a certain amount of doubt. After all, if we assume that Yerevan and Tehran will be able to agree (this, as they say, for God's sake - we will only be happy with the success of the Armenian authorities), what to do with the already concluded gas supply contract with 2018 of the year with Gazprom. After all, consumers will be tempted to renegotiate agreements in order to get even more tangible savings.

However, Minister Movsisyan argues that such negotiations do not contradict agreements with Russia, and that Gazprom allegedly gave the go-ahead to conduct the negotiation process with other suppliers.

In this regard, the question arises: why would Gazprom, accustomed to feeling like a host on a huge market, allow Yerevan immediately after finding a contract to look for new options? In fact, the answer to this question lies on the surface. It is not the first time when Armenia and Iran enter into negotiations over the supply of Iranian "blue" fuel. And each time, these negotiations for official Yerevan ended, to put it mildly, in a non-constructive manner. In the course of the relatively recent negotiations of the Armenian and Iranian sides, Tehran stated that with the current situation on the gas market and with the existing infrastructure configuration, it is ready to discuss the conclusion of a contract with official Yerevan only if the starting point of the gas price corresponds to 400 dollars. Lower price Iran is not satisfied categorically. Does the price in 400 dollars per thousand cubic meters suit the Armenian side? - a strange question, considering that for official Yerevan and the price of 189 dollars looks high.

It is for this reason that Gazprom has become “generous” to allow Movsisyan to look for new ways of supplying gas to Armenia. Obviously, the management of Gazprom is well aware that not one country (not a single company) is going to sell gas to Armenia at a price lower than 189 dollars for 1000 cubic meters, and therefore "from its bounty", let's say, "in the highest way allows" Armenia look for new (cheaper) suppliers.

However, the Armenian side is not losing hope to persuade Iranian suppliers to reduce gas prices. It’s hard to imagine what kind of bonuses for more than a two-fold decrease (for example, $ 170 instead of $ 400) gas prices can promise the Armenian leadership of Iran. One of such bonuses could be the priority right for the construction and operation of the Armenia-Iran railway, which has been talking about economic efficiency for several years. But even in this case, Armenia today is unlikely to be able to offer something to Iran, given the fact that SCR (South Caucasus Railway), a subsidiary of Russian Railways, was named the main operator of the future railway. A preliminary estimate of the cost of building the railway is about $ 3 billion, and the main investor is a company from the United Arab Emirates with the interesting name “Rias”. During the construction, Chinese companies are ready to participate. The Iranian side took part only in the discussion of organizational issues. It turns out that in this case Armenia simply has nothing to offer in return for Iran, because today the Armenian railways are actually transferred to the management of the Russian state company.

There is only one conclusion: whole sectors of the Armenian economy today are “tied” to close contacts with Russia. Security of Armenia, by the way, too. If these contacts are broken up, then irreversible processes can begin in the region, and the Armenian authorities are well aware of this.

In this regard, the fact that Armenia chooses integration with the CU and the future entry into the Eurasian Economic Union looks like an obvious component of the further development of the country. It’s simply inappropriate to look for other integration routes for the Armenian leadership today, and by and large there are not many people who want to support the Armenian economy (and even more security). Today, the Armenian opposition can say that Armenia chooses a “European future,” but whether Europe itself chooses Armenia along with a whole pile of unsolved problems plus its own problems is a question whose answer is obvious. It is well seen that Armenia for the European Union is a country beyond its primary interests: there is no active sponsorship to the “Armenian Independence Party”, there are no fiery speeches by overseas guests in the squares of Yerevan - everything is quite calm. The West resigned to the fact that the Russian positions (both economic and political) in Armenia are too strong. This may someone strongly dislike, but, nevertheless, it is a fact held.

Ctrl Enter
Noticed oshЫbku Highlight text and press. Ctrl + Enter
We are
Day of the Armenian army. How the armed forces of Armenia were formed and developedYerevan Maidan: who is shaking Armenia?
Military Reviewin Yandex News
Military Reviewin Google News
328 comments
Information
Dear reader, to leave comments on the publication, you must sign in.