Libya will be bombed in three stages

March 20 2011
15
The military operation in Libya will take place in three stages. According to Western media, during the first phase, which began the day before, Libyan air defense systems should be neutralized. At the second stage, the strike will be delivered against the bases of the Libyan Air Force, as well as the residence of Muammar Gaddafi. In the third - strikes will be applied directly to the Libyan army. 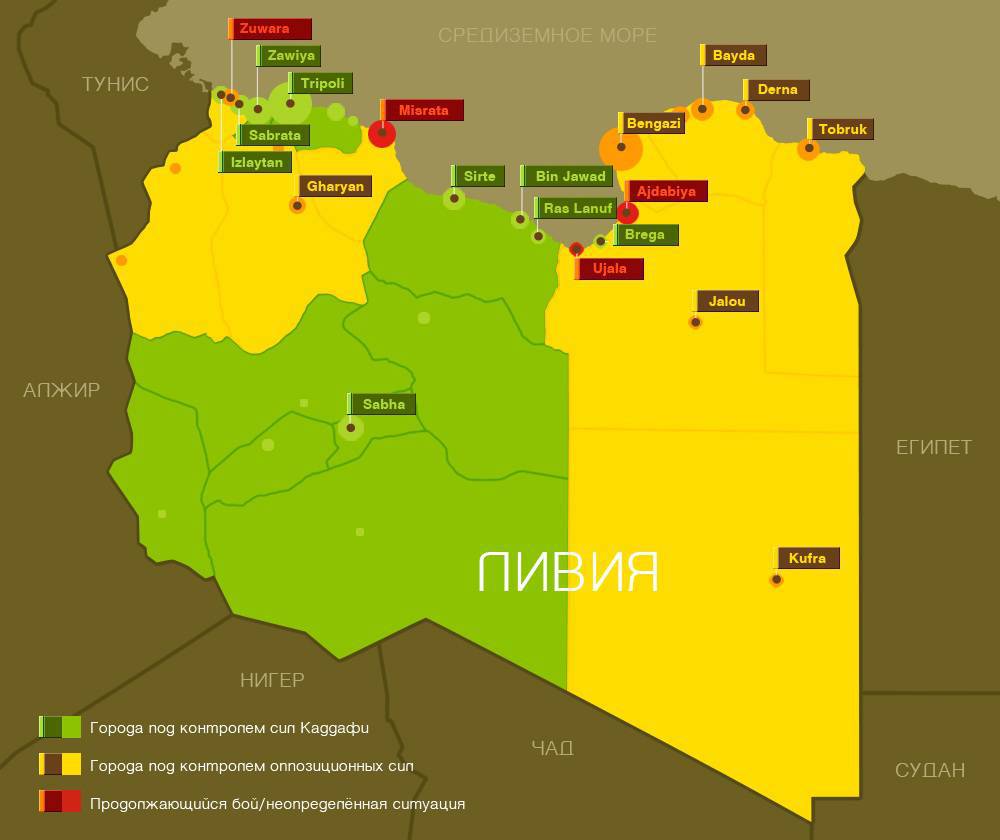 Earlier it was reported about the air strikes of the international coalition on the Bab Al-Aziz military base near Tripoli, which is considered to be the main headquarters of the head of state M. Gaddafi. In addition, missile and air strikes were inflicted on other Libyan military targets. According to some Western media, the Libyan air defense systems suffered "substantial damage."

The chairman of the United States Joint Chiefs of Staff (USP), Admiral Michael Mullen, said that the military operation of the international coalition does not aim at overthrowing the regime of Muammar Gaddafi in Libya. The goals of the Western military campaign are limited, he added.

According to the admiral, the coalition "actually established a regime over Libya, which does not allow flights aviation government forces ”, which is consistent with the UN Security Council resolution. In his opinion, air operations and missile attacks of the West caused significant damage to the infrastructure of the Libyan Air Force and Air Defense, which led to the actual establishment of a restricted area over the country. According to M. Mallen, in recent days not a single aircraft of M. Gaddafi flew over Libya.

In addition, M. Mullen noted that the actions of the coalition allowed to stop the offensive of the Libyan government forces on the capital of the opposition - the city of Benghazi.

At the same time, the American admiral noted that as a result of the actions of the coalition forces, the civilian population of Libya did not suffer.

The next stage of the operation “Odyssey. Dawn "in Libya could be a blow to the supply lines of M. Gaddafi, said in an interview with CNN M. Mallen. Now "we will try to cut off the supply lines," he said. According to M. Mullen, the forces of M. Gaddafi "are scattered between Tripoli in the west and Benghazi in the east of the country, and tomorrow we will try to reduce their supply."

Russia urges the states conducting an armed operation in Libya to end the “indiscriminate use of force”. The corresponding statement by the official representative of the Ministry of Foreign Affairs of the Russian Federation, Alexander Lukashevich, was circulated today by the Information and Press Department of the Russian Foreign Ministry.

“We firmly proceed from the inadmissibility of using the mandate derived from resolution 1973 of the Security Council, the adoption of which was a very ambiguous step to achieve goals that are clearly beyond its provisions, providing for measures only to protect civilians,” the statement said.

As noted by the Foreign Ministry of the Russian Federation, according to incoming reports, during the air raids, Libya was attacked, including against non-military objects in the cities of Tripoli, Tarhuna, Maamura, Zhmeyl. As a result, 48 civilians were reportedly killed, more than 150 were injured. The medical cardiological center was partially destroyed, roads and bridges were damaged.

The chairman of the Liberal Democratic Party of Russia (LDPR), Vladimir Zhirinovsky, called the actions of the international coalition and, above all, NATO in Libya, a cynical military aggression carried out in the framework of the colonial policies of Western countries, the press service of the party reports. The actions of the participants of the crusade against Libya should be regarded as a crime against the Libyan people, he added.

V.Zhirinovsky declared: “Shame and disgrace to the whole NATO bloc, barbarians and murderers! The time will come - and all these villains will sit in the dock. There will be an independent international tribunal, there will be a new Nuremberg trial. Aggressors will be rewarded for their numerous crimes. ”

According to the LDPR chairman, with the arrival of NATO, Libya is waiting for a standard scenario: “blockade, then threats, a large-scale propaganda campaign, a military operation and the dismemberment of the country into fragments.” That is how it all happened with the arrival of NATO troops in Yugoslavia, and in Afghanistan, and in Iraq.

“All this was done only to defeat legitimate governments, establish pocket political regimes and, ultimately, to establish total control over the geopolitical situation and resources. This is a pronounced colonial policy, disguised by false declarations of concern for the lives of ordinary people. This is the policy of wolves in sheep's clothing, because as a result of the forceful intervention of new European barbarians in the lives of these countries, problems in politics and economics were not only not solved there - they were aggravated, ”V. Zhirinovsky emphasized.

He called the actions of the coalition "rocket democracy": "When the West is profitable, when the situation is favorable and corresponds to their scenario, everyone is silent. Everything is fine, everything is calm. But if the situation is out of control, if someone, like M. Gaddafi, shows independence and independence in assessments and actions, a howl begins about violations of democratic principles in a single country, ”the leader of the Liberal Democratic Party said.

The Libyan government has decided to distribute weapon more than 1 million citizens of the country. This will be done in a few hours, and it is planned to arm both men and women, the state reports news Jana news agency.

This decision was taken after 19 and 20 March in the territory of Libya were attacked by air and missile attacks by the forces of the international coalition, which includes the United States, France, the United Kingdom and a number of their allies. According to new data from the Libyan Health Ministry, 64 people died as a result of coalition air strikes.

The troops of the head of Libya, Muammar Gaddafi, entered the city of Misrata captured by the rebels, reports Reuters. At that time, as the air forces of the West, they are implementing the UN Security Council resolution, the armored vehicles of the government forces reached the city center, and a fierce battle began, local residents and opposition representatives told the agency. Data on the number of dead and injured from both sides have been reported.

According to the BBC, citing an eyewitness to what is happening, Tanks Gaddafi’s army entered the center of Misrata, tanks fired on buildings, resulting in at least 10 people killed and at least 40 injured. Misrata remained the only western city in Libya, which until recently remained in the hands of opponents of M. Gaddafi.

Recall that Misrata was also subject to the bombing of the international coalition forces. Early in the morning of March 20, US and British warships fired at least 110 Tomahawk cruise missiles at country targets, and French military aircraft launched air strikes.

The cities of Tripoli, Misrata, Zuvar, Sirte and Benghazi were subjected to shelling, according to the statements of the Western coalition forces, the blows were inflicted on the fuel depots and ammunition depots of the army of M. Gaddafi. According to the Libyan media, strikes hit residential areas in Tripoli, more than 50 civilians were killed and more than 150 were injured as a result of shelling.

The United States, Great Britain, Canada, France, and Italy participate in the operation against Libya. Pentagon officials said the United Arab Emirates (UAE) and Qatar are also participating in the operation against Libya. The Emirates provided 24 military aircraft, Qatar - 4-6 machines. In addition, in the near future, the bombers of Canada and Spain should join the French aviation.