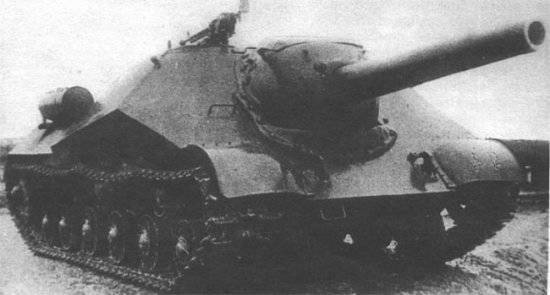 Developed by the design office of the experimental plant No. 100 in 1945, under the direction of Joseph Yakovlevich Kotin, the chief designer of the Russian heavy tanks and self-propelled guns of the time. Unlike other experienced self-propelled guns, MIS-152-1 and MIS-152-2, which were just non-standard re-equipped serial machines, MIS-152 arr. 1945 was a completely new design. The adoption of the heavy tank IS-3 has set the task of the designers of the pilot plant No. 100 to create an appropriate ACS at its base. Since the EC-3 was a cardinally reworked EC-2 from the point of view of armor protection, ACS on its base was also designed as an analogue of the serial ICS-152 based on EC-2 with improved booking.

Enhanced protection was achieved both by increasing the thickness of the reservation, and placing it at more favorable angles to counteract the armor-piercing action of the shells. The developers of the armored hull successfully coped with the task: the installation forehead was a solid rolled armored plate with a thickness of 120 mm, tilted at an angle of 50 ° to the vertical. For comparison, in the serial ISU-152, frontal armored elements had a thickness of 90 mm and a tilt angle of 30 ° to the vertical. The reserving of the mask of the gun was brought up to 160 mm, and together with the anti-recoil armored casing the total maximum armor thickness of the gun reached 320 mm. Due to the reconfiguration of the combat compartment, the total mass of the ACS increased only by 1,3 tons compared with the serial MIS-152. For heavy ACS IAS-152 model 1945, had a record low overall height of the machine - 2240 mm. Among all the experienced and serial Soviet SAU of the times of the Great Patriotic War, the ISU-152 model 1945 of the year was the most protected from enemy fire. Her front booking was able to withstand the fire of even the most powerful German anti-tank gun Pak 43.

The design office of Fedor Fedorovich Petrov for the new ACS has developed a new modification of the howitzer cannon ML-20CM, the idea of ​​which was put forward as early as 1943 year. Its most important difference from the serial ML-20C was the absence of a muzzle brake, which made it impossible to fire from a gun if there was a landing on the self-propelled gun armor.

However, the desire to obtain maximum security with fixed dimensions and weight turned out to be quite an expected drawback - constraint in the self-propelled gun compartment. The refusal of the muzzle brake in the design of the gun led to an increase in its recoil length to 900 mm, and the advantageous frontal tilt angles required to transfer the driver’s workplace to the left upper part of the combat compartment. The polygon tests carried out showed that such its location leads to a decrease in the viewing space and increased fatigue of the driver due to the large amplitudes of oscillations of the armored hull during the movement of the ACS on an uneven surface. As a result, the ISU-152 of the 1945 model of the year was not adopted by the Red Army and was not mass-produced. The only prototype model released is currently on display at the Panzer Museum in Kubinka, Moscow Region. 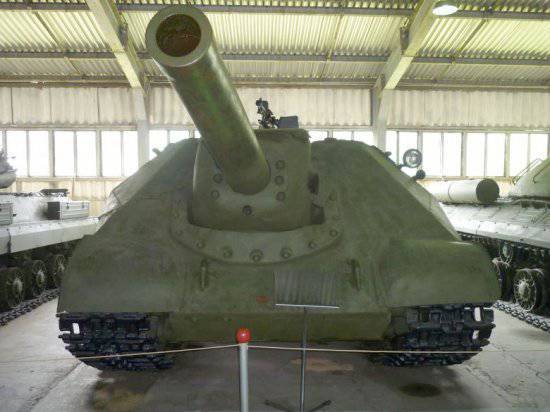 ISU-152 model 1945, had the same layout as the serial Soviet SAU of the time (except for the SU-76). The fully armored corps was divided into two parts. The crew, gun and ammunition were placed in the front in the armored wheelhouse, which combined the fighting compartment and the control compartment. The engine and transmission were installed in the stern of the car.

The armored body of the self-propelled unit was welded from rolled armored plates of thickness 120, 90, 60, 30 and 20 mm. Armored protection differentiated, protivosnaryadnaya. The armor plates of the cabin and the hull were installed at rational angles of inclination. The anti-recoil devices of the gun were defended by a fixed cast armor cover and a movable cast armor, each of these parts had a thickness of up to 160 mm in the parts most exposed to enemy fire.

Three crew members were located to the left of the gun: in front of the driver, then the gunner, and behind - loader. The commander of the car and the castle were to the right of the gun. The landing and exit of the crew were made through four hatches on the roof of the cabin. The round hatch to the left of the cannon was also used to bring out an extension of the panoramic sight. The hull also had a bottom hatch for emergency escape of the self-propelled crew and a number of small hatches for loading ammunition, access to the fuel tank necks, other units and assemblies of the machine.

The main armament of the ISU-152 model 1945 of the year was the howitzer cannon ML-20CM caliber 152,4 mm with a piston gate. The ballistics of the gun was similar to the previous version of the ML-20. A large-bore machine gun DSHK caliber 12,7 mm was paired with the gun. The twin installation was mounted in a frame on the frontal armor plate cutting along the center line of the machine. Its vertical alignment angles ranged from −1 ° 45 ′ to + 18 °, the horizontal guidance was limited to a sector in 11 °. The range of a direct shot at a target with a height of 2,5 — 3 m was 800 — 1000 m, the range of the direct fire shot was 3,8 km, the longest shooting range was about 13 km. The shot was made by means of electric or manual mechanical descent, practical rate of fire - 1 — 2 shot per minute.

Gun ammunition was 20 shots separate loading. The shells were laid along both sides of the cabin, the charges - in the same place, as well as on the bottom of the crew compartment and on the rear wall of the cabin.

The ISU-152 model 1945 of the year was equipped with a four-stroke V-shaped 12-cylinder diesel engine B-2-IC with a capacity of 520 l. with. (382 kW). The engine was started by the electric starter CT-700 with a capacity of 15 l. with. (11 kW) or compressed air from two tanks with a capacity of 10 l in the fighting compartment of the machine. Diesel В-2IS was completed with a high-pressure fuel pump NK-1 with an all-mode RNA-1 regulator and fuel delivery corrector. To clean the air entering the engine, a “multicyclone” type filter was used. Also in the engine compartment, a thermosyphon heater was installed to facilitate engine start-up during the cold season and to heat the vehicle's compartment. ISU-152 model 1945, had three fuel tanks, two of which were located in the fighting compartment, and one - in the engine-transmission. The total capacity of the internal fuel tanks was 540 l. The self-propelled gun was also equipped with two external additional fuel tanks (each for 90 l), not connected with the engine fuel system.

ACS ISU-152 of model 1945 of the year was equipped with a mechanical transmission, which included:
multi-disk main friction clutch of dry friction "steel on ferodo";
four-speed gearbox with a dual-stage transmission (8 gears forward and 2 back);
two onboard two-stage planetary rotation mechanisms with multi-plate interlock friction of dry friction “steel on steel” and belt brakes;
two double-row combined side gearbox.

The suspension of the ISU-152 model 1945 of the year is individual torsion for each of the 6 solid cast gable rollers of small diameter on each side. Opposite each support roller, armors of the suspension balancers were welded to the armored hull. The drive wheels with removable toothed rims of the hitch linkage were located at the back, and the sloths were identical to the road wheels. The upper branch of the track was supported by three small solid supporting rollers on each side. Caterpillar tension mechanism - screw; Each caterpillar consisted of 86 single-track tracks 650 mm wide.

The electrical wiring in the ACS IMS-152 of model 1945 of the year was single-wire; the second wire was the armored case of the machine. The sources of electricity (operating voltages 12 and 24 B) were the G-73 generator with the РРТ-24 relay-regulator with 1,5 kW and four series-connected 6-STE-128 rechargeable batteries with a total capacity of 256 Ah. Electricity consumers included:
external and internal lighting of the machine, devices for illumination of sights and scales of measuring instruments;
external sound signal and signaling circuit from the landing force to the crew of the vehicle;
instrumentation (ammeter and voltmeter);
electric trigger gun;
communication means - radio station, target designator and tank intercom;
electrician of motor group - electric motor of inertial starter, reel of candles of winter engine start, etc.

Means of observation and sights

All hatches for entry and disembarkation of the crew had periscopic Mk IV devices for observing the environment from inside the machine (4 items in total), several more such devices were installed in the cabin roof. The driver led the observation through a special periscope device in the roof of the cabin.
For firing, the self-propelled gun was equipped with two gun sights - a breaking telescopic TSH-17K for direct fire and Hertz's panorama for firing from closed positions. The TS-17K telescopic sight was graduated for aimed shooting at a distance of up to 1500 m. However, the range of the 152-mm howitzer-gun was up to 13 km, and for firing at distances over 1500 m (both direct and closed positions) to the gunner I had to use a second, panoramic sight. To ensure visibility through the upper left round sunroof, the panoramic sight was completed with a special extension. To ensure the possibility of fire in the dark, the scales of sight had illumination devices.

The communication facilities included the 10РК-26 radio station and the TPU-4-BisF intercom to the 4 subscriber. For more convenient target designation, the self-propelled gun commander had a special one-way light-signal communication system with the driver-mechanic.

The radio station 10РК-26 was a set of transmitter, receiver and umformer (single-shaft motor-generators) for their power, connected to the on-board power network with voltage 24 B.
From a technical point of view, 10РК-26 was a simplex lamp heterodyne short-wave radio station operating in the frequency range from 3,75 to 6 MHz (corresponding to wavelengths from 50 to 80 m). In the parking lot, the communication range in the telephone (voice) mode reached 20 — 25 km, while in motion it decreased slightly. A large communication range could be obtained in the telegraph mode, when information was transmitted by a Morse key or other discrete coding system with a telegraph key. The frequency was stabilized by a removable quartz resonator, and there was also a smooth frequency adjustment. 10РК-26 allowed to simultaneously communicate at two fixed frequencies (with the possibility of smooth adjustment mentioned above); For their change, another quartz resonator from 8 pairs in the radio station set was used.
The TPU-4-BisF tank intercom device made it possible to negotiate between SAU crew members even in heavily noisy environments and connect a headset (headsets and laryngophones) to a radio station for external communication.
Ctrl Enter
Noticed oshЫbku Highlight text and press. Ctrl + Enter
We are
Modernized medium tanks in the postwar period. Tank T-34-85 arr. 1960"The Hypericum" - the storm "Tigers" and "Panther"
13 comments
Information
Dear reader, to leave comments on the publication, you must to register.