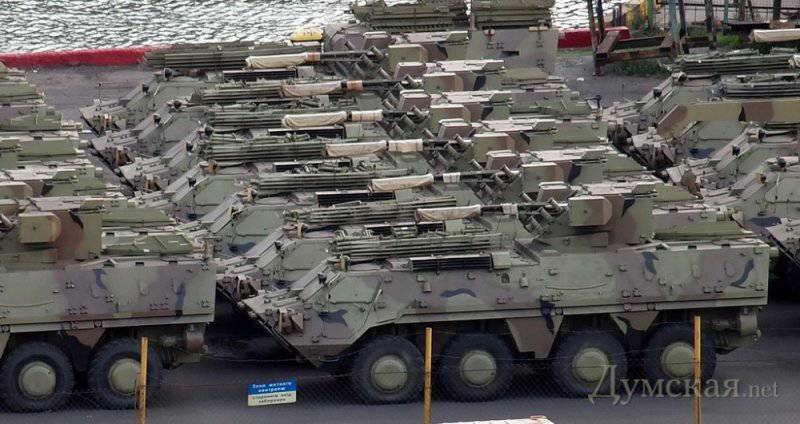 2013 year for the Ukrainian "Ukrspetseksport" became very difficult. In the first place, this was due to the conflict situations that arose with regard to the supply of BTR-4 to Iraq.

So, according to the terms of the contract concluded in 2009, the Ukrainian side was obliged to supply the Arabs with aircraft, Tanks and 420 BTR-4. For Ukraine, this deal was the largest since the collapse of the USSR - the amount under the agreement was $ 2,4 billion.

But with the party, shipped to the Iraqi side in the spring of 2013, there was a conflict with the customer. 42 combat vehicles, which were delivered to the port of Umm-Qasr on the ship SE PACIFICA (owner - Singapore company White Whale Shipping), were not accepted by the Iraqi military because they were defective. The customer found cracks in the body of combat vehicles and flatly refused to accept the cargo. The vessel with non-loaded armored personnel carriers was anchored in the Persian Gulf for a long time, then sailed to the Indian shores with a cargo of metal.

The delay in the transfer of armored personnel carriers to an Iraqi customer led to a disruption in the delivery schedule of the metal to India: the ship and its cargo were arrested in the Indian port. After being released from arrest (the Indians demanded three months late payment from the supplier), the ship returned to the Persian Gulf in September. During his entire stay off the coast of Iraq, the ship’s commander repeatedly and unsuccessfully tried to obtain instructions and concrete decisions from the Ukrainian side regarding the future fate of the cargo. But it was in vain: Iraq by this time announced the cancellation of the contract with Ukraine. The long-suffering ship SE PACIFICA set off along the way with armored personnel carriers rejected by Iraqis. The dry cargo ship SE PACIFICA arrived in the beginning of January 2014 of the year in the port of Oktyabrsk, which since Soviet times was used to export weapons.

The sad finale of such a lucrative contract for the Ukrainian military industry has its own reasons. And each of the parties has its own vision of the situation with the fulfillment of rights and obligations under the transaction. 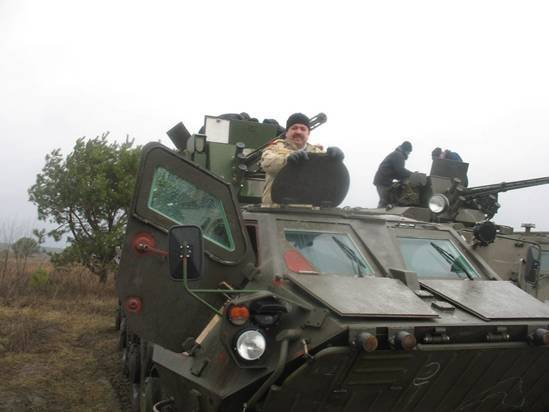 The Iraqi military does not hide its opinion on the operation of the BTR-4 in Iraqi territory. They note: “Very good and powerful weapons, but with the 30-mm ZTM-1 cannon there were a number of problems. In addition, the process of equipping the combat module with ammunition for the 30-mm cannon is quite complicated. The ribbon supply sleeve requires a better quality with smoother surface "The presence of anti-tank guided missiles deserves a good mark." But according to Iraqi customers, the BTR-4 MSA, although better than a number of Ukrainian and Russian, is still inferior to European systems. In addition, the Iraqi military during the operation of the BTR-4 were forced to replace the coolant with that used in Iraq - due to the fact that the coolant of the supplier of equipment did not lower the engine temperature to the required values. Also for the Iraqi military, the cause of pipeline leaks on many Ukrainian armored personnel carriers remained unknown.

According to Iraqi experts, test operation was carried out on high-quality roads and at not very high air temperatures (in the summer, the heat reaches 55 degrees), so the engine did not work at maximum load. But even in such circumstances, technology often broke down.

Summing up all the arguments, we can say that the Iraqi military believes that the BTR-4 is easier to operate than American or European vehicles, but this car is still poorly protected from land mines and RPGs. According to them, when mounted on the BTR-4 lattice screens, armored personnel carriers will become more protected from these weapons.

In addition, Iraqi technical experts are very unhappy with the training they took in Ukraine. In their opinion, the Ukrainian instructors were not competent enough, and the general level of training was very weak.

So what could be the main reason for the marriage of Ukrainian armored vehicles?

There is a fairly well-founded opinion that the cause of the cracks found in the BTR-4 hulls, delivered under the Iraq contract, was a high level of welding stresses that could arise when the welding technology was violated. According to experts, the welding mode was obviously violated, and the work was carried out in a cold workshop, in drafts. In this case, the weld is cooled much faster than it should be - because of this, thermal stress has been created in the metal. This assumption is confirmed by the fact that it was in the combat vehicles, the hull welding of which was carried out in the winter, cracks and other defects were found. 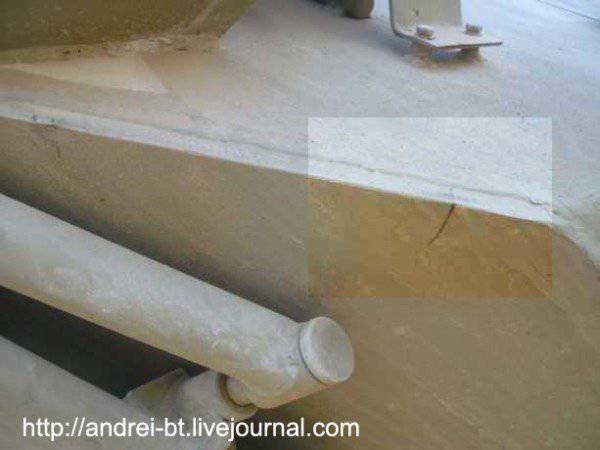 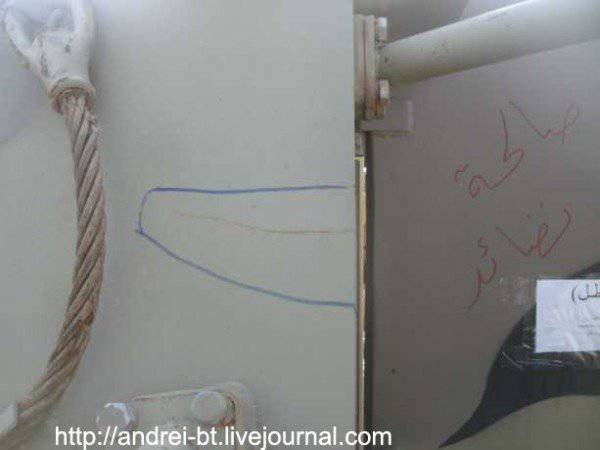 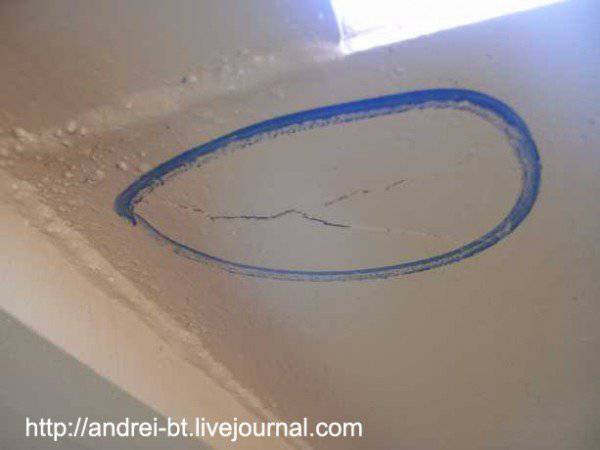 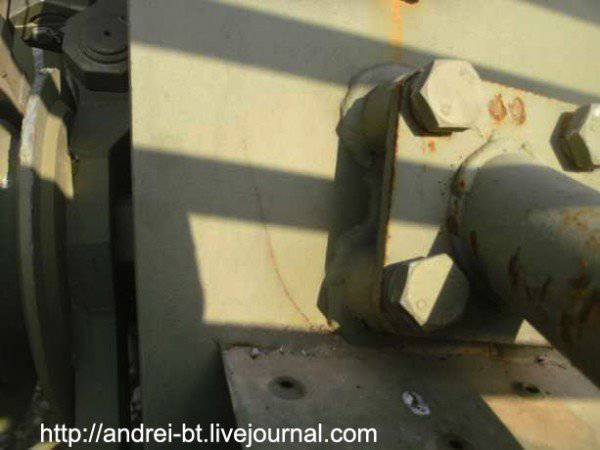 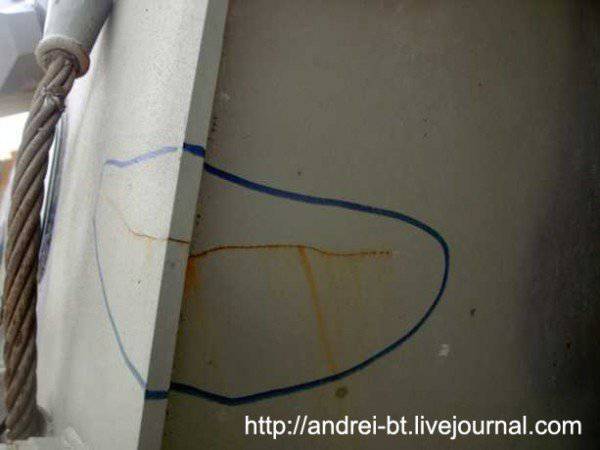 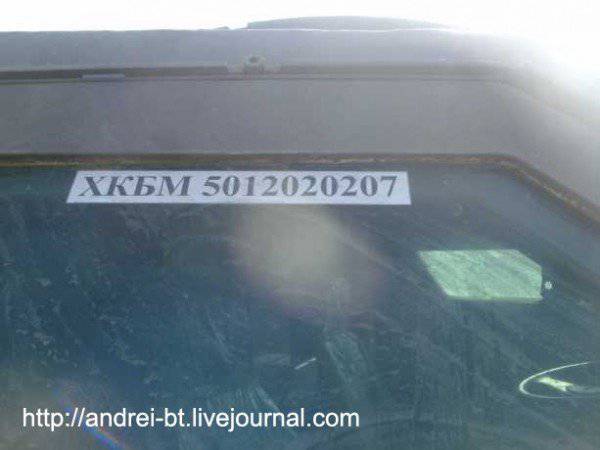 Experts say that in order to avoid this defect, metal parts after welding had to be placed in a high-temperature chamber (200-300 degrees) and slowly cooled.

The culprit in the marriage of the buildings was recognized by the Lozovsky Forging-Mechanical Plant (LKMZ). It is possible that the additional gas costs made the project unprofitable for LKMZ, and the production workers saved on gas in full confidence that the poorly executed work would go unnoticed. And so it happened - neither the state-owned Ukrspetsexport, which was obliged to provide authoring support for the entire project, nor the experts of the Malyshev Kharkov Machine-Building Plant either noticed or pretended not to notice the technical marriage allowed by LKMZ.

It should be noted that some experts say that in Soviet times such an attitude to work would be defined as sabotage and sabotage, but now other times and a different assessment of actions. The greed and dishonesty of those responsible for technology compliance led to the sad end of the Ukrainian-Iraqi military-technical project.

It is possible that what became known thanks to the information of numerous media outlets is only the tip of the iceberg. After all, Iraq refused not only the BTR-4 party, but also other planned deliveries of military equipment. This can also be a serious reason. As a result of a whole chain of adverse events, the Ukrainian budget will not receive huge foreign exchange earnings, and the reputation of manufacturers has also suffered significant damage. The state-owned companies Progress and Ukrspetsexport owed the shipowner for the direct transportation of armored vehicles to the shores of Iraq, for months of drift in the Persian Gulf. The return of armored personnel carriers will cost the Ukrainian treasury also expensive.

As soon as it became clear that all those involved in the transaction from the supplier of military equipment will not receive any commissions or profits, and that the funds spent on marketing will not be compensated (and they, according to some calculations, equal one third of all funds under the contract) to the prosecutor’s office was given the command to understand the situation.

It is not difficult to find the perpetrators of such a failure of the Ukrainian military industry - they are known. It's no secret that the reason for the failure to supply military equipment under the contract is not only the dishonesty of the production workers, but also the too large chain of intermediaries in the implementation of the contract. But many of them are abroad and continue their work on armory markets, including the Russian one, and are inaccessible to the Ukrainian justice. Their significant earnings are hidden in offshore accounts of foreign firms. Companies such as UST-Tech Consulting, Hectorian Services, British Lanefield Exports, owned by Belize-based companies Milltown Corporate Services and Ireland & Overseas Acquisition, Universal Investment Group (UIG), have been well known to Ukrainian law enforcement agencies for a long time - they were intermediaries in others. deals of Ukrainian gunsmiths.

In addition, problems with the Iraqi contract are also associated with D. Salamatin joining the Ukrspetsexport state corporation, who served as head of the Ukroboronprom. Failure to supply Iraq with military equipment cost the position of Ukrspetsexport general director D. Peregudov. His place was taken by A. Kovalenko. But this resignation did not help the Ukrainian Arms Corporation - instead of the Ukrainian BTR-4, the Iraqi side decided to buy Russian BTR-82.

It must be said that some media have passed information that 40 armored personnel carriers returned by the Iraqi side after arrival at the port of Odessa will be inspected, and if there are damages and defects, they will be repaired. If the Iraqi side agrees, after carrying out maintenance and repair, the armored personnel carriers will be able to go to the customer again. But if Iraqi customers believe their supplier?

Ukraine continues to work on the conclusion of new contracts for the supply of BTR-4 - buyers can become the armed forces of Kazakhstan, India, the United Arab Emirates and the armies of other countries. It remains to be believed that Ukrainian suppliers will take into account their own experience and mistakes in the implementation of other contracts.