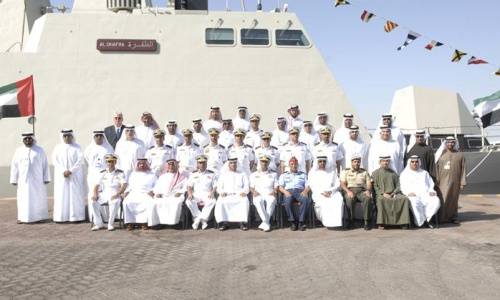 Ships are being built under a contract concluded in 2003 with the French company CMN (Constructions Mécaniques de Normandie). The fourth ship, Mezyad, was launched in early 2012. Adsb last, sixth, ship must pass the fleet in 2014 year.


The construction of the Baynunah-type corvettes is part of the UAE’s sea weapons program. On it, in particular, will be built corvette type Abu Dhabi and patrol ships such as Falaj-2. Earlier this year, ADSB was contracted to build 8 amphibious ships and boats of 64, 42 and 16 meters in length. The agreement was concluded during the IDEX-2013 exhibition.

Ctrl Enter
Noticed oshЫbku Highlight text and press. Ctrl + Enter
We are
Innovation Day of the Southern Military District: Pictures from the ExhibitionThe action “Military service under the contract is your choice!” In Rostov-on-Don: future contract servicemen, exhibitions and “Russian Knights”
Military Reviewin Yandex News
Military Reviewin Google News
39 comments
Information
Dear reader, to leave comments on the publication, you must sign in.